Previously tenanted by One 60 Café and Urban Bistro, the Commissary restaurant opened on Monday offering a Mediterranean-influenced breakfast and brunch menu and views of the green fields and gum trees in Victoria Park/Bakkabakkandi.

Painted windows and curtains no longer block the far-reaching views; the restaurant has been completely refitted to offer an open space with a clean and contemporary look and feel.

“Commissary” is a name Priscilla Milky “jotted down” because she liked it, even before she had seen the location of what would become the Milky-Kambouris family’s new restaurant.

A commissary is defined as a restaurant or a food store in a military base, movie studio or other institution, and the name makes sense given the new restaurant is located on the ground floor of a former maternity hospital which was developed into one of Adelaide’s premium apartment buildings in the early 1990s.

Despite the association, there’s nothing cold or militant about the Commissary – the Milky family is good at hospitality. Priscilla’s parents, Loretta Milky and the late John Milky, owned several restaurants: Café Luna Rosso at Goodwood, and Benvenuto and Café Supremo at Salisbury. Priscilla and her brother David have always worked in the family restaurants, while their cousin Daniel Milky and his seven siblings own the Argo delis.

“Dad passed away just a month after we opened Luna Rosso, but we kept it going for seven years,” says Priscilla. “We sold Luna Rosso four-and-a-half years ago and our year off turned into four.

“I dabbled in raw foods and my brother had a fruit and veg run [delivery service] until we started to look at getting into restaurants again. It was a bittersweet moment for us opening Commissary this week without Dad.”

The Commissary team comprises Loretta as head chef, David as barista, Priscilla running front-of-house, her husband Jimmy Kambouris as second chef, and Jimmy’s sister Anna as one of the wait staff. Together they create the Lebanese/Greek influences on what Priscilla describes as a “modern Australian menu with a Mediterranean twist” at Commissary. 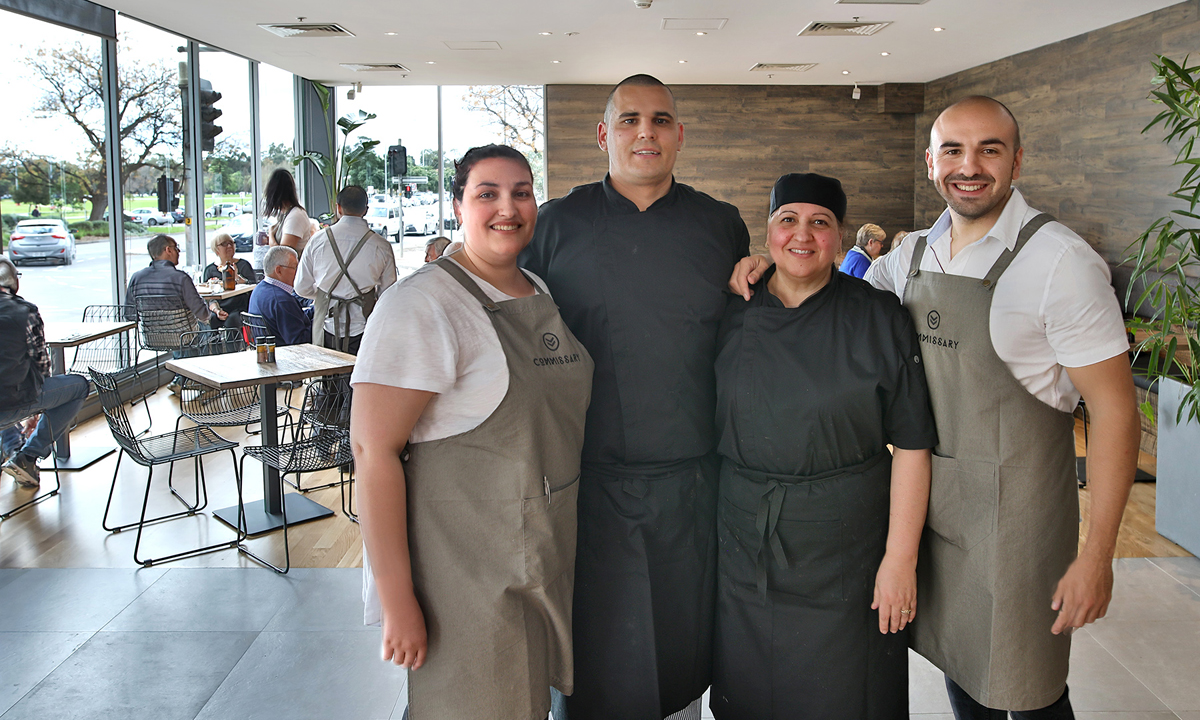 “While having time off I became really interested in the clean, healthy eating path,” she says.

“People shouldn’t be cautious about what they eat at Commissary – we make everything ourselves to order and have lots of options for coeliacs, vegetarians and vegans.”

Breakfast is served all day from 7am, offering free-range eggs with many options including chorizo, haloumi, goat cheese, kale, rosti and beans. Lunch includes dishes such as dukkah-encrusted lamb with lentils and feta; handmade falafel with bright pink pickled turnip (coloured with beetroot juice), hummus and za’atar; and “five spice chicken” with chickpeas and kale slaw.

There are healthy snacks such as compressed watermelon with hung yoghurt and toasted nuts and seeds, and more decadent sweets such as French toast with caramelised popcorn, and red velvet waffles (also coloured with beetroot juice) with vanilla-bean ice-cream.

“We have all the alternative milks and we make our smoothies with fresh coconut water, straight from the shell, and served in the shell.”

Heineken and Hahn Superdry beer and James Squire Cider are on tap. The wine list is limited, but Priscilla says it will change with the menu every three months.

The locals have taken well to the new eatery. “One of the residents has made a permanent booking every day for lunch,” says Priscilla.

And the family has slipped back into its familiar dynamic. “My brother David takes care of the coffee and I do everything else,” she laughs.

Commissary is open for brunch and breakfast seven days.