For all the excitement generated by the temporary relocation of Copenhagen restaurant Noma to Sydney recently, one can’t help but suspect a fair bit of it was due to the thrill of paying $1000 a head for food and wine – and even getting a place at the table, given that bookings sold out in about 30 seconds.

This is not in any way to discredit what Noma did – by all accounts Danish chef René Redzepi’s cooking, based on native Australian produce, was exceptional, as was the wine matching. You’d expect that from a restaurant that until not long ago had been named the best in the world.

But those eager Sydney punters would have been far better rewarded had they flown to Adelaide, dined at Jock Zonfrillo’s Orana, upstairs at the eastern end of Rundle Street, stayed the night at the Hilton and flown home. With a menu costing about a third of Noma’s, and no less exciting, they’d still have had a heap of change left over from their grand.

Zonfrillo – who counts Redzepi as a close friend, having once worked in his restaurant – actually played an important role in Noma’s success here, helping it to source supplies as it flew around Australia. Noma had the good fortune of a huge, subsidised budget and didn’t actually have to make a profit – and even at $1000 a head, apparently didn’t.

Scottish-born Italian Zonfrillo left Magill Estate as executive chef in late 2013 to open Orana, but he has harboured a passion for Australian native produce since 2000, when he started venturing into Aboriginal communities all over Australia.

He is far from being the first chef to be fascinated by the potential of using native produce. In Copenhagen, there’s Redzepi, of course, among others; in Brazil, just as famous, there’s Alex Atala at D.O.M., who focuses on the foods of the Amazon basin; even in Australia we had pioneer chefs such as Andrew Fielke (Red Ochre) in Adelaide, and Jean-Paul Bruneteau (Riberries) and Raymond Kersh (Edna’s Table) in Sydney. (For more on this read John Newton’s informative new book The Oldest Foods on Earth.)

But in Australia, Zonfrillo (who is assisted at Orana by head chef Shannon Fleming and a very small team) stands out for his understanding of the nuances of flavour and texture, and his ability to create dishes of exquisite balance and depth. I don’t know the cooking of Atala or Redzepi, but I would not be at all surprised if Zonfrillo could be added to their illustrious ranks.

Is it pioneering or just opening our eyes to something very old that can be adapted and modernised to suit contemporary tastes? 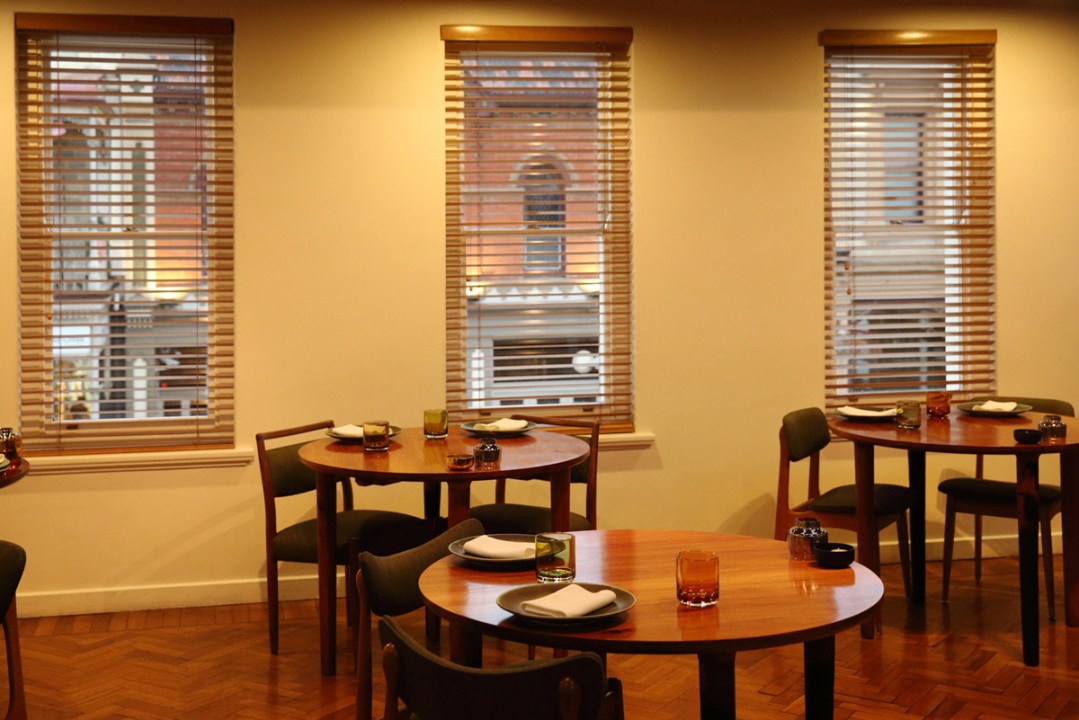 “What you are eating is a version of something I’ve learnt from my past or what I’ve seen when I’ve lived in an Aboriginal community,” Zonfrillo says. “It provides inspiration – and then I go off target. For example, we use ash in our cooking not for effect but because it does something.”

He tells how he saw an Aboriginal woman cooking mangrove seeds over coals, splashing them with seawater and then tossing ash over the seeds: “She was effectively cooking mangrove seeds in ash water, drawing out their astringency, turning them into something edible that had previously been impossible to eat.”

That’s one of 15 tasting dishes served as an introduction to the meal, what Orana calls Alkoopina, or snacks. They come in quick succession over about 40 minutes along with a glass of the house Champagne, in this case from the small, family-owned Aubry but likely soon to become Krug.

There’s a tiny loaf of damper, cooking and crisping on a bowl of hot coals, with lamb butter – like a thick hollandaise made from aged, roasted lamb fat. Then one of several tastes in a tiny wooden spoon, chicken liver parfait with shavings of wild Adelaide Hills hawthorn and a scattering of mountain pepper. 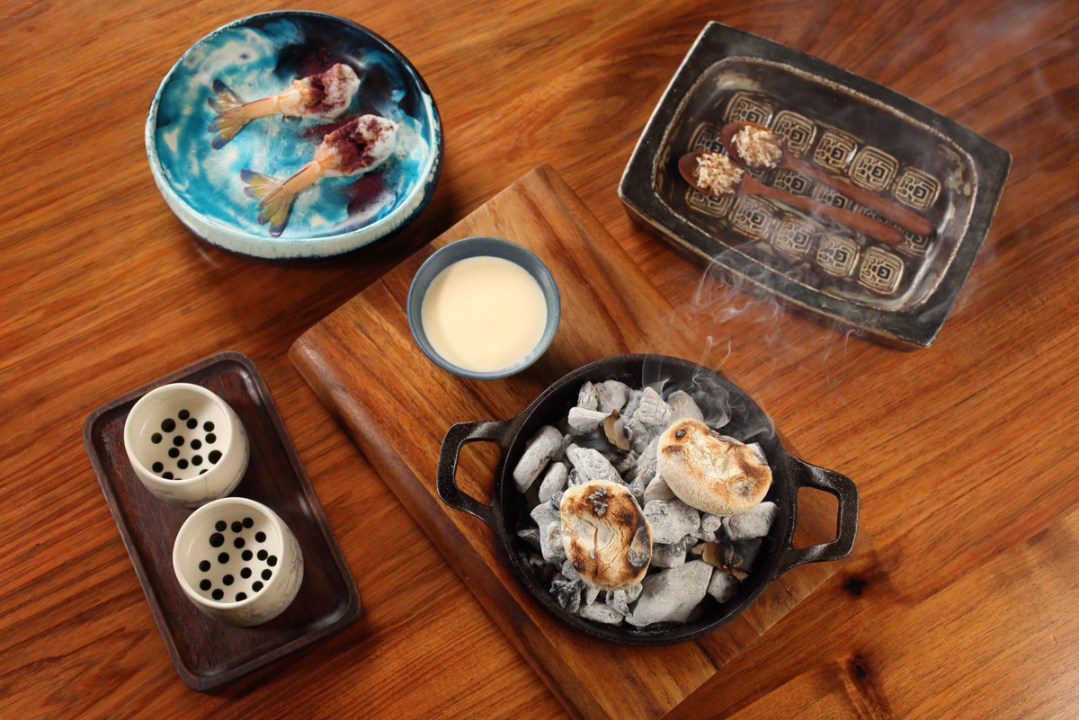 Much of Orana’s produce grows wild in the Adelaide Hills, from porcini mushrooms – of which they’ve already collected many kilos this season – to three cornered garlic (sometimes called onion weed), sheep’s sorrel (dock), farmer’s friend (a type of native wheat) and much more.

“We harvest tonnes from the Adelaide Hills every year,” Zonfrillo says. “And because we look after the places where we find it, there’s more of it than ever.” (Message to farmers: hold off on the Roundup and check first if you’re killing off dinner.)

There’s a single mussel shell filled with a delicate mussel custard with a lightly cooked mussel on top and a sprig of sea blight; a small bowl of nutty-flavoured macadamia milk spiced with native thyme (grown by Orana, whose chefs join a full-time forager in sourcing native ingredients).

A wide sliver of roast pumpkin has been strongly flavoured with aged beef fat, sourced from one of the English Longhorn cattle that Zonfrillo has urged meat czar Richard Gunner to grow. Crisp saltbush is joined by bush tomato, black garlic (a colour achieved by ultra-slow caramelisation) and a little crème fraiche; a shaving of raw kingfish, sitting on a thin rice cracker, is brushed with an emulsion made from the lightly smoked fish head, with ice plant and sunrise lime (a hybrid of the native finger lime and kumquat relative, the calamondin); a spoon of finely diced squid, marinated in lime juice and tossed with aniseed myrtle, is topped with tiny beads of finger lime; a shard of crisply fried kangaroo tendon, like a long prawn cracker but more melt-in-the-mouth, has been brushed with a paste of dorrigo pepper and mountain pepper with a little soy; a wide slice of porcini mushroom, raw, is just brushed with beurre noisette with little dabs of intensely reduced beef caramel – totally delicious.

Still in this list of “snacks” comes a sensational bowl of pippis cooked over eucalypt with smoky eucalypt leaves in a broth of their own juices and a little crème fraiche, with beach succulents such as samphire and sea celery. As Redzepi discovered, Europeans don’t have access to baby clams as good as these – a dish like this in a top-starred Michelin restaurant would probably set you back $100 on its own, and be no better than this.

This was just the prologue, or most of it, to an array of dishes, all of which are the result of endless kitchen testing, explorations and tastings. Like the slightly larger dishes to come, they all show remarkable balance and depth of flavour.

The last of the alkoopina is designed to put your palate on full alert, a really zingy dish of sweet Davidson plums, desert lime, feral guava (all from NSW), and magenta lilli pilli and brined riberries (from SA), in a foam of Davidson plums and kaffir apple. It was sweet, sour, bitter and astringent, all at once.

A gorgeous-looking salad of pickled kohlrabi, shaped into little cones, came with astringent lilli pilli, dorrigo pepper, sorrel leaves and a lemon myrtle dressing which somehow left you with warm, nutty flavours – a totally balanced dish. On to thinly-sliced strips of kangaroo loin, lightly seared over coals and arranged as a kangaroo footprint before being topped with a melange of fermented gubinge (Kakadu plum) from the Kimberley and wild radish leaves. 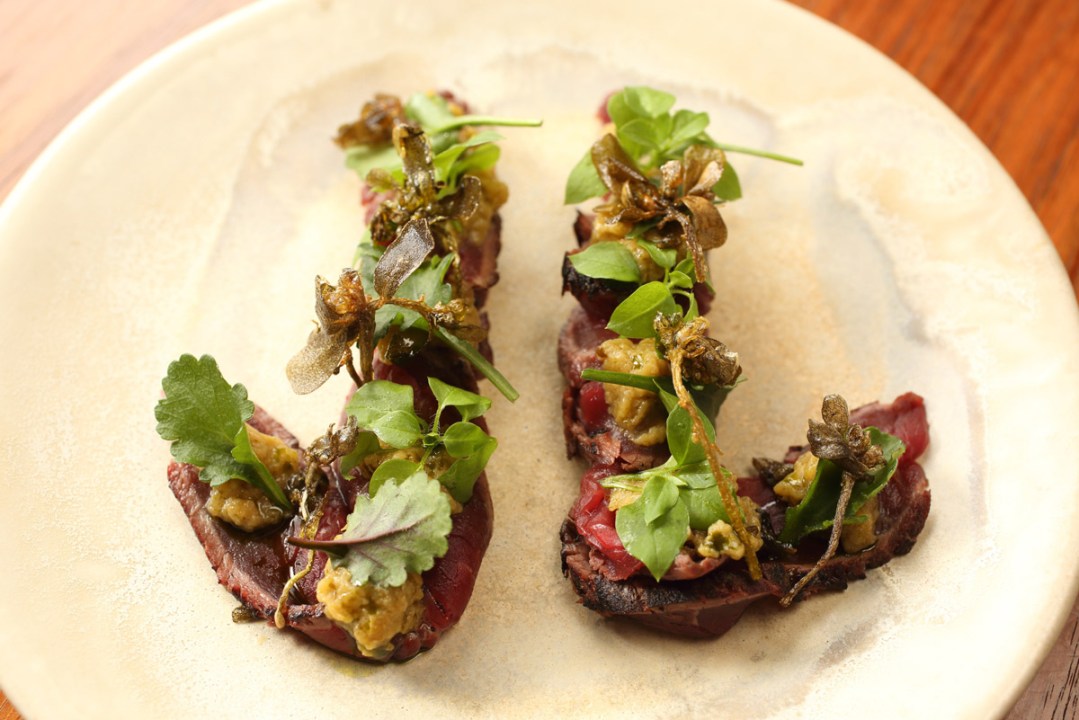 A fillet of Coorong mullet, one of the few warm dishes, had been seared over coals then brushed with an emulsion of Geraldton wax needles (freeze-dried, then crushed), with a tiny pyramid of sweetish carob emulsion on the side. Zonfrillo regards Geraldton wax as one of the great Australian products and asks why we aren’t all using it.

He first saw it used at the Fitzroy River, when he saw a barramundi brushed with Geraldton wax: “When I smelt it, I said ‘f***, how has this been ignored? Why aren’t we eating it?’” Well, here we are.

We were fortunate this night to have magpie goose on the menu, a rare and much prized game bird found in northern Australia – ruby red, barely seared, thinly sliced, on a bed of mashed, smoked potato with smoked leek and a slightly acidic, clear sauce from pandanus vinegar and bunya nut brine, with a scatter of red saltbush berries (pictured top). It was a beautiful dish with layers of flavour. Zonfrillo commented: “Some dishes we work on for years and they turn into something beautiful. This is one of them.”

On to the sweet dishes. First a small platter: an Adelaide Hills chestnut wafer with a dehydrated porcino praline, shaved bunya nut, a tiny scoop of wattleseed ice cream, toasted wattleseed and a scatter of spruce pine oil that had somehow been turned into a powder; a Davidson plum marshmallow that looked just like a sticky bun, with a dusting of quandong sherbet; a cube of deep red jilungin tea jelly (a dreaming bush tea from the Kimberley) with native honey and dehydrated sunrise lime; and a spoonful of native currant fool inside a burnt damper wafer. 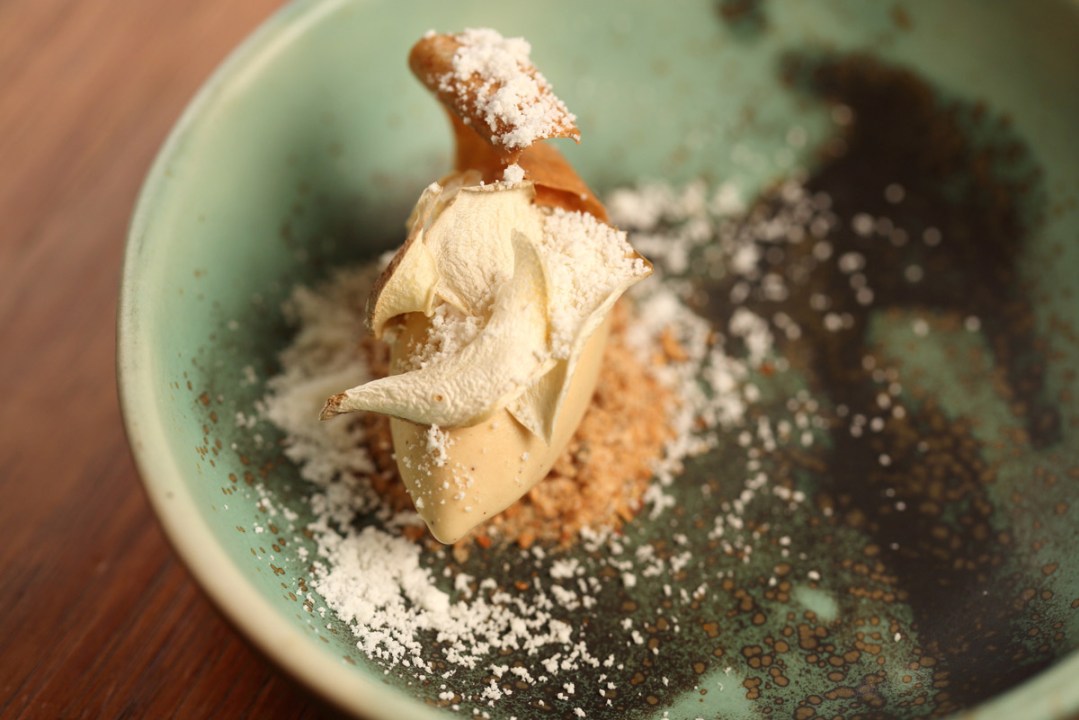 The final dish, one that’s never left the menu and is designed to sum up what Orana is all about, is a scoop of silky textured, cream-coloured set buttermilk in a pond of fresh strawberry juice and eucalyptus oil.

Zonfrillo found inspiration for this dish when he was “walking the songlines” in Queensland with an Aboriginal elder in the middle of a heatwave: “I smelt strawberries in the middle of the desert and it came from a particular eucalypt whose leaves, in that heat, gave off that oil. It was insane, so strong and powerful.”

It will probably be a long while before most of us seize upon these native ingredients and employ them in our own kitchens, but Orana provides as much incentive to do so as we’ve ever had. Brushing seafood with Geraldton wax before grilling it doesn’t sound too daring.

Zonfrillo doesn’t really care. All he’s in search of is a really authentic Australian flavour, and at Orana he’s found it. Anyone interested in food and cooking should go there; just forego a couple of ordinary meals out and have an exceptional one.