Owners Penny Loughnan and Anthony Baker returned to Adelaide last month to open the space after establishing a Combi cafe at Elwood in Melbourne.

Loughnan and Baker have ties to Adelaide beyond Combi. Loughnan’s brother, Brenton, owns Amalfi Pizzeria Ristorante on Frome Street and Baker’s son, Josh, is one of the owners of Coffee Branch, Clever Little Tailor and Pink Moon Saloon; interestingly, it was Josh who taught his father to make coffee. 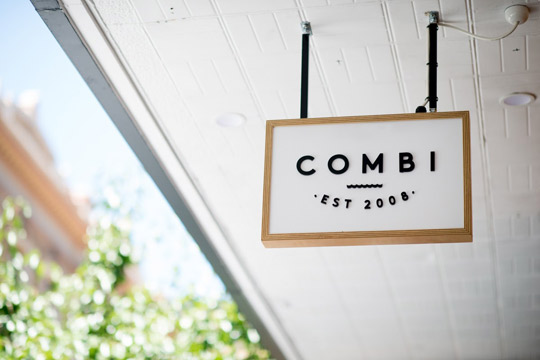 The Combi base remains in Melbourne, where the Adelaide menu items are produced. The Adelaide menu is a selection of Melbourne Combi’s most popular raw food items, such as cold-pressed juices (made in collaboration with Organic Avenue), acai bowls, kombucha, smoothies, and sugar-free, gluten-free and dairy-free cakes. 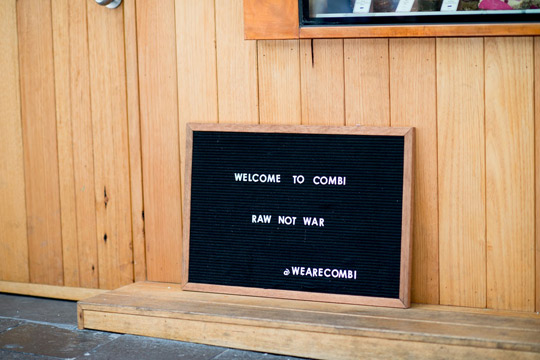 The Combi raw-food catchcry sits on the footpath beneath the counter. Photo: Nat Rogers/InDaily

For those new to the raw food trend, it is the practice of eating only uncooked, unprocessed foods – mostly fruits, vegetables, nuts and grains, as it is believed that heating food destroys nutrients and enzymes. 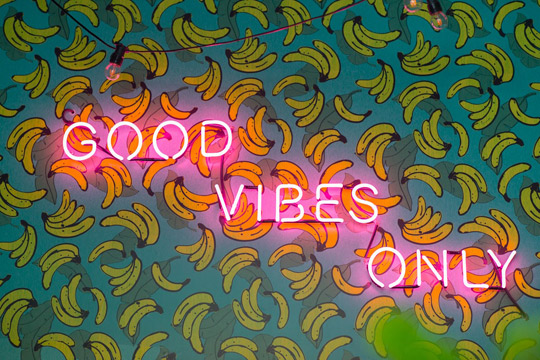 Neon lighting behind the counter at Combi. Photo: Nat Rogers/InDaily

Cold-pressed juice is supposed to taste better and contain more nutrients than conventionally processed alternatives, and while it is also almost double the price, Combi’s Organic Avenue juices are 100 per cent organic, which would account for some of the cost. 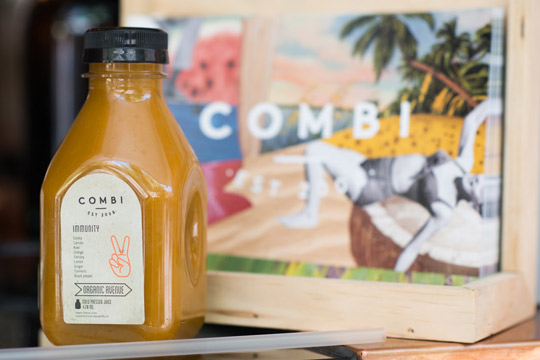 Acai bowls are basically thick smoothies topped with coconut, fruit and nuts, and are eaten with a spoon. Known as a superfood because of their high antioxidant value, acai are small purple berries which grow on Brazilian acai palm trees. In Australia, acai berries are mainly found in powdered form. 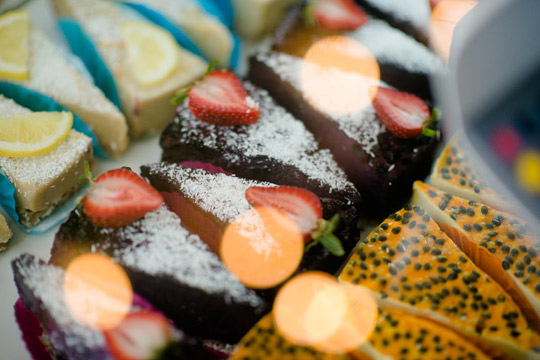 Kombucha is a fermented drink which is generally made from a base of tea and a culture of bacteria and yeast, similar to how vinegar is made. It is believed to have many health benefits. 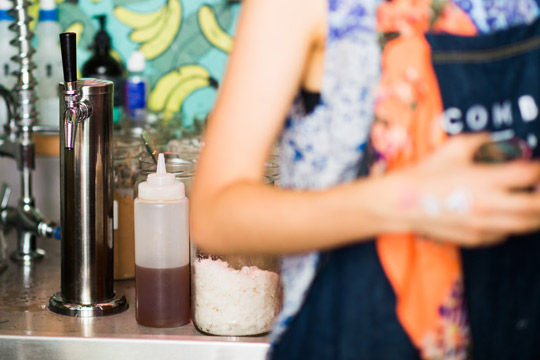 Combi is a happy and colourful place, with a couple of tiny tables and stools out the front. If you’re lucky, a seat will become free by the time you have ordered, but it’s probably better to plan on eating back at the office as there’s really nowhere to sit and eat nearby and everything is packaged to takeaway anyway. 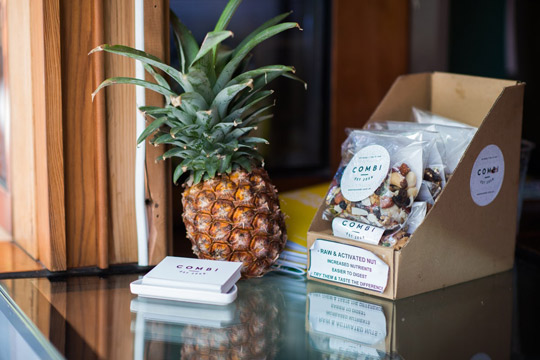 It’s great to see healthy takeaway options offered in the city which are also good to look at. Adelaide could do with more of them. However, we do have two small criticisms: there’s really nothing on the menu for those with palates that seek a more savoury kind of sustenance, and we would prefer the option of a smaller bowl for a smaller price rather than a lid to cover and take home what we couldn’t finish. 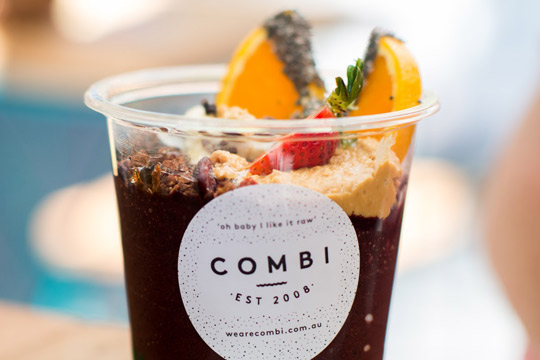 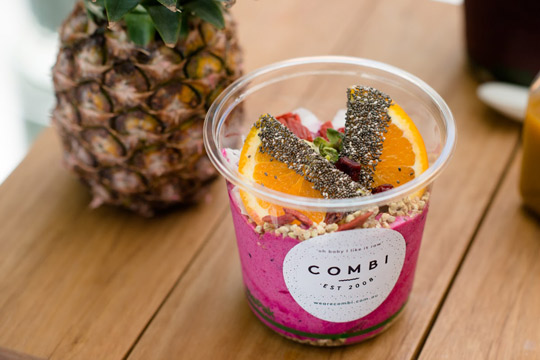 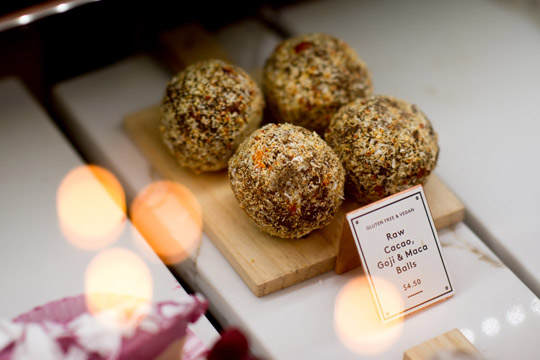 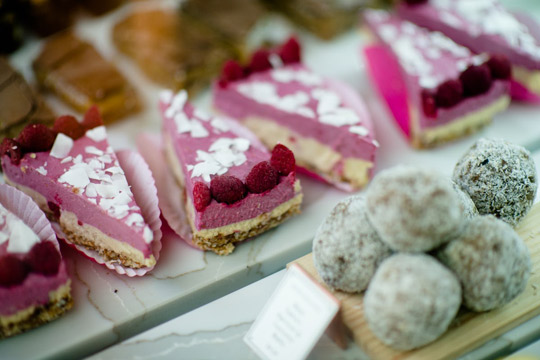 Something sweet/to drink: Beneath the refrigerated glass counter is a selection of raw organic cakes and treats such as Combi’s famous salted caramel slice, lemon cheesecake, acai berry cheesecake, mango and passionfruit cheesecake, a “Snicker Bar” and three types of bliss balls. 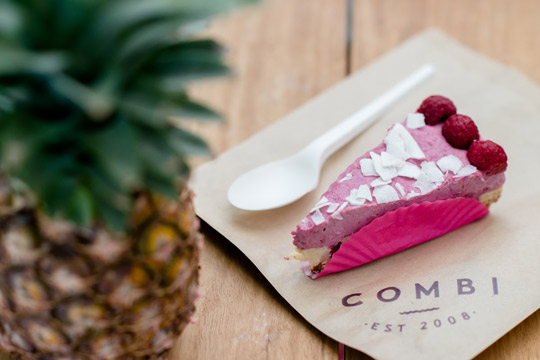 InDaily tried the acai, coconut and raspberry cheesecake ($9.50), a semi-frozen bright pink wedge of dense “cake” decorated with fresh raspberries. But if you don’t really have enough room left after your acai bowl, we’d suggest leaving sweets for a different day because they are too pretty and delicious to waste. 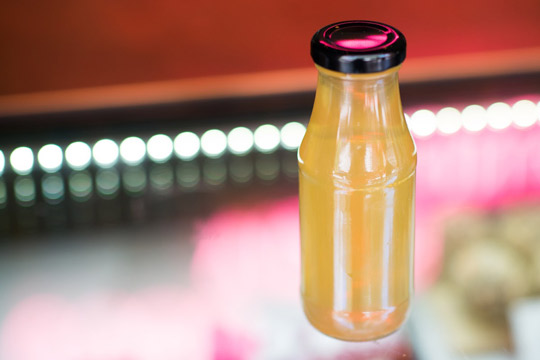 There is a list of around seven “raw organic superfood smoothies” to choose from ($12.50 each) in various shades of green, blue, orange and cream with ingredients including kale, brazil nuts, spirulina (a type of blue-green algae for human consumption), raw fermented protein powder and mesquite powder (made from the seeds of mesquite plants). 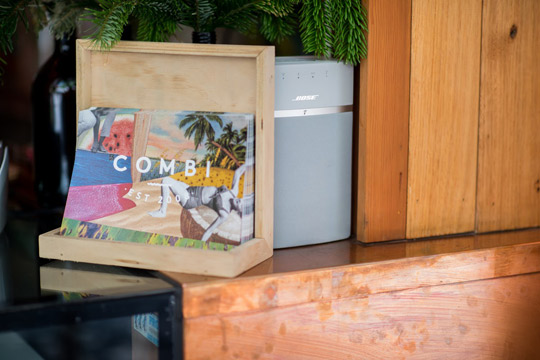 Also available to drink are three varieties of Organic Avenue cold-pressed juice blends (Field of Greens, Rosey Coco and Immunity; $8.50-$9.50 each) and ginger and turmeric house-made “Kombucha on Tap” (sold in glass bottles). And if you’re after a coffee, you may have to stop in at Josh Baker’s Coffee Branch a little further up Leigh Street at number 32, as we didn’t see any signs of the organic Fair Trade coffee for which  Melbourne’s Combi is known.