There were many dedicated customers of the original Fino at Willunga, 50km south of Adelaide, who wondered how owners Sharon Romeo and chef David Swain could possibly manage, at the same time, a sibling restaurant 80km north of the city and continue to provide the exceptional regionally-focused food for which they’d made their reputation.

Swain’s answer was to appoint another great regional chef, Ben Sommariva (ex Penny’s Hill), to take the helm at Fino Willunga, and move experienced Fino sous chef Sam Smith to head chef at Seppeltsfield, with both Swain and Romeo in effect helicoptering between the two. 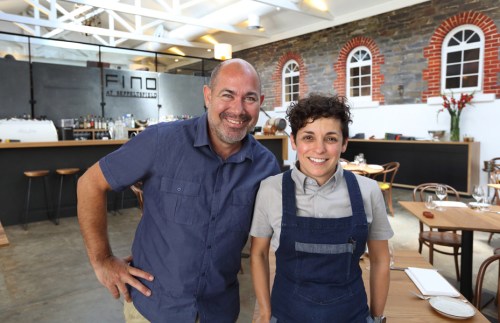 Swain is a chef who pioneered an almost obsessive focus on finding the best regional produce, with an open back-door kitchen that welcomed local goodies, while Romeo mastered the art of a small wine list that sought out the best and most interesting local wines, while providing challenges with imports from around the world.

Fino has won many awards on both fronts and just been included among Australia’s top 500 restaurants in Fairfax Media’s recently announced listing. It will no doubt be a strong contender for making the final cut of the Best 100.

The reason why Fino at Seppeltsfield will probably do the same is because Swain has brought together a field of experience and partnerships that date back almost 30 years when he worked for four years with Ann Oliver at Mistress Augustine’s in North Adelaide, where he met his wife-to-be Sarah. After a couple of years in Europe, he found himself at the Melbourne Wine Room, under star chef Jeremy Strode, and after a couple of detours came to work at Port Willunga’s Star of Greece, which is where he met Sharon Romeo, who ran the floor.

“She was so much fun, so much energy, so dynamic, she could sell anything we ever made,” Swain now says. She still can. In 2001 Swain moved to the Salopian Inn at Willunga, working for Fleurieu legend Pip Forrester, who also ran d’Arry’s Verandah and Penny’s Hill restaurants. Ben Sommariva was then at d’Arry’s before moving to Penny’s Hill. So the key relationships that would finally flower at Fino were now made.

When Forrester sold the Salopian Inn, Swain and Romeo teamed up in 2006 to buy the former Black Duck Cellars, which they quickly transformed into Fino with an instant paint job, recycled bentwood chairs and a family loan to buy produce for their first menu.

The opening at Fino Seppeltsfield last November could not have been more different. 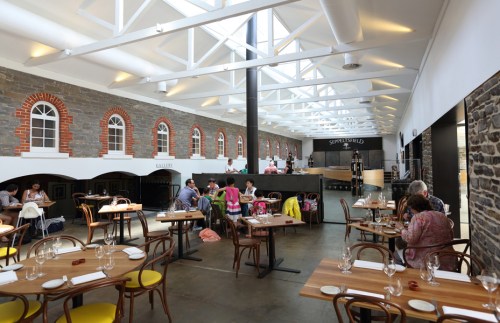 As part of a massive $3 million restoration program by Seppeltsfield owner Warren Randall, it involved a redesign by architect Max Pritchard that created a total of three dining areas in the original 1850s bottling hall. This includes a semi-subterranean dining area housed within the 1868 bluestone wine fermentation tanks, which stays at a constant 20C, a main dining area and adjacent cellar door, and an al fresco area overlooking a huge terraced courtyard and fountain.

The vast spaces, exposed white-painted rafters and abundant skylights give a semi-industrial feel to the main dining area, which is no frills with well-spaced bare wooden tables, bentwood chairs and polished cement floors, but it has a sleek contemporary edge and splashes of colour, such as the yellow seats, that make it a very user-friendly space that’s adequately separated from the cellar door area.

Once again, Swain – ably assisted by head chef Sam Smith, who’d had five years at Fino Willunga – has raided the regional pantry, arguably richer and better developed even than that of the Fleurieu, although the seafood has a few more kilometres to travel. 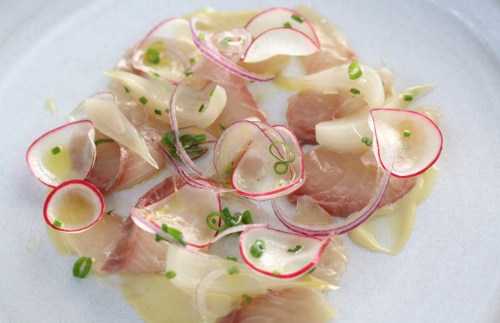 The Hiramasa kingfish ($22), in fact, comes from Port Lincoln, lightly smoked slivers sitting on a light, anchovy-infused mayonnaise topped with shaved radish ‘flowers’ and salted and vinegared salad onions seasoned in olive oil for a month – gorgeous to look at; a fresh, summery dish.

Don’s carrots ($18; pictured at top) come from a Riverland grower of heritage carrots, but the recipe is straight from Don Dunstan’s cookbook – scrubbed and pan-fried with a little sugar and a splash of St Agnes brandy, on a sorrel mayonnaise and topped with shaved zucchini to give it extra height and colour.

The Berkshire pork belly ($33), however, is a truly local Schu Am product, rolled and very slowly roasted, with housemade sourdough and Barossa Valley haloumi cheese and sage stuffing, served with earthy steamed beetroot, cabbage and a light chicken stock reduction. This is a wonderful dish; rich, luscious, unctuous, meltingly tender. 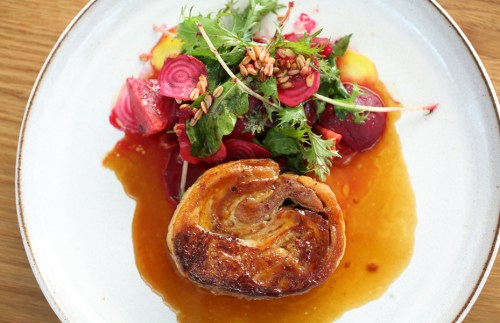 The waiting staff and kitchen cope happily with diners wanting a fast, purposeful meal as they tour the Barossa, or obliging customers who plan to settle in for the afternoon and try to drink Seppelsfield dry. Wines, not surprisingly, include the full Seppeltsfield range of house wines, exclusive to the restaurant and cellar door, and of course the famed fortifieds, but Warren Randall has given Romeo full licence to cast her net widely, as she does at Willunga, and it would be a sensible thing to ask her for her wine suggestions.