Featuring what are described as homestyle recipes from Hanoi to Ho Chi Minh, the book is by Tracey Lister and Andreas Pohl. The couple have lived for many years in Hanoi, where Lister runs a cooking school and Pohl works as a writer, researcher and educator.

“A true Vietnamese classic!” says the recipe introduction. “Pho is a well-balanced meal with plenty of broth to ward off dehydration in the hot, humid summer months, and to warm body and soul in the cool and drizzly winters.

“Hanoians like to slurp the noodles first so they don’t become soft and mushy from sitting in the broth too long.” 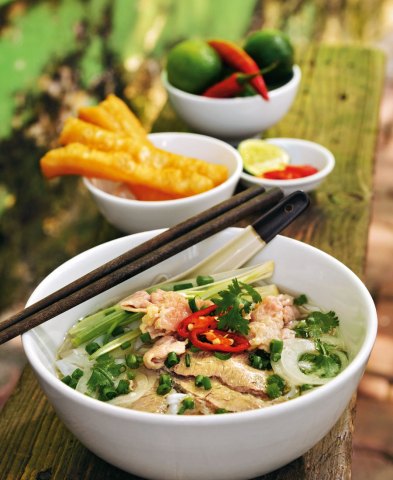 Meanwhile, chargrill the whole unpeeled shallots and ginger on a barbecue or gas burner over medium heat for 5 minutes, until they are fragrant and the skin is lightly charred. Leave to cool slightly. Using your fingers, flake off the thin outer skin.

Place the roasted bones in a large saucepan with the trotter.

Cover with cold water and slowly bring to a simmer, skimming off any froth. Add the chargrilled shallots, ginger, brisket, spices and salt. Simmer gently for 30 minutes, taking care not to boil the stock.

Remove and reserve the brisket, then simmer the stock for a further 4 hours. Strain the stock and discard the solids.

When ready to serve, marinate the scotch fillet in the fish sauce and set aside. Slice the brisket and set aside. Ensure the broth is at simmering point.

Drop the noodles into a pan of boiling water and stir with a chopstick for 20 seconds. Drain and divide among six bowls.

Top with the meats, onion, spring onion and herbs. Ladle the hot broth over. Serve with lemon, chilli and extra fish sauce. 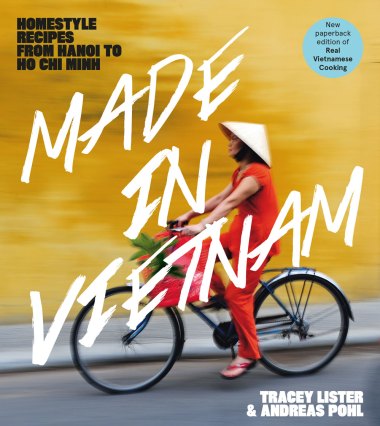 Recipe and photo from Made In Vietnam by Tracey Lister & Andreas Pohl, published by Hardie Grant Books, $39.