This is how people used to travel, how Australia was first sighted by Europeans.

It is a clear night and the stars are no longer just fairy lights in the sky but markers by which to steer the ship; you count the frequency of flashes to identify the lighthouses, guiding you through the dark sea.

And then there is a moment of sheer magic, flashes of phosphorescence under the bow. Dolphins, so amiable at play during the day, now trailing streaks of lightning, five of six at a time, as they zoom past and under the ship. Both crew and passengers are equally entranced. 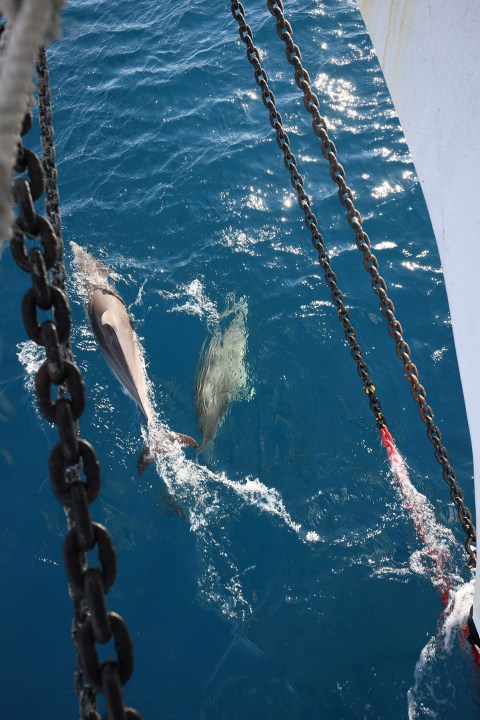 This is the sort of captivating moment that happens when you sail on the One & All, the tall ship built 30 years ago by volunteers, since then run by volunteers, a ship built for and owned by all South Australians. And, curiously, let slide off their radar in recent years, despite being one of this state’s most valuable tourism and youth training assets.

Officially it’s named STV One & All – a sail training vessel – and although that’s a valuable job it has performed successfully over three decades, it has perhaps distracted the general populace from the ship’s potential for more than that. And that’s about to change.

The One & All is owned by the state’s Department for Infrastructure and Transport, which has supported its expensive maintenance with $400,000 a year and paid the wages of two permanent crew, while the ship itself has covered its own operational costs of around $1.2 million a year.

Perhaps wondering why on earth it owns a ship (given that buses and trains are more its thing), the government last year told the One & All’s volunteer support group that this funding would cease in three years and they’d have to find other ways to meet the shortfall. A new volunteer board was formed with senior medico Professor Hugh Grantham as chair, advertising guru Andrew Killey joined the crew pro bono to work out a new marketing plan, and a new course was set to sail the One & All back onto Australia’s, not just our state’s, adventure radar.

For it really is an adventure to sail on the One & All, whether it be just a day sail or several nights aboard heading to Kangaroo Island, as in this instance, or to Port Lincoln, the Sir Joseph Banks Islands or regional excursions that are planned to gulf ports such as Robe, Ceduna and Whyalla.

We were fortunate. The weather, though bitterly cold, was calm and the winds were behind us, both sailing through the night to Kangaroo Island, eventually mooring just off Snellings Beach, and two days later setting off from Kingscote at midnight after a feast of a dinner cooked by the captain, Bill Walsh, back to Port Adelaide.

Four days, three nights, all meals, great company – in this case, 11 crew and nine paying passengers – terrific value at $1150. In these COVID-afflicted times, passenger numbers for overnight trips can rise to 15, while on day sails the numbers can rise to 45. Grantham, a former medical director of SA’s ambulance service and a professor at two universities, clearly a very useful chap to have on board, has ensured the ship has a state-approved COVID-safe plan.

All on board are divided into watches – port, starboard and middle – who take turns to sail the ship. The watch system is disorientating. You have dinner, sleep for three hours, then get up for a midnight to 4am watch, quite possibly in pouring rain on a heaving deck. Because the weather can become quite nasty, and the last thing anyone wants is to fall overboard, you’re strapped into a safety harness of cunning clips and buckles obviously designed by a Houdini-like escape artist. 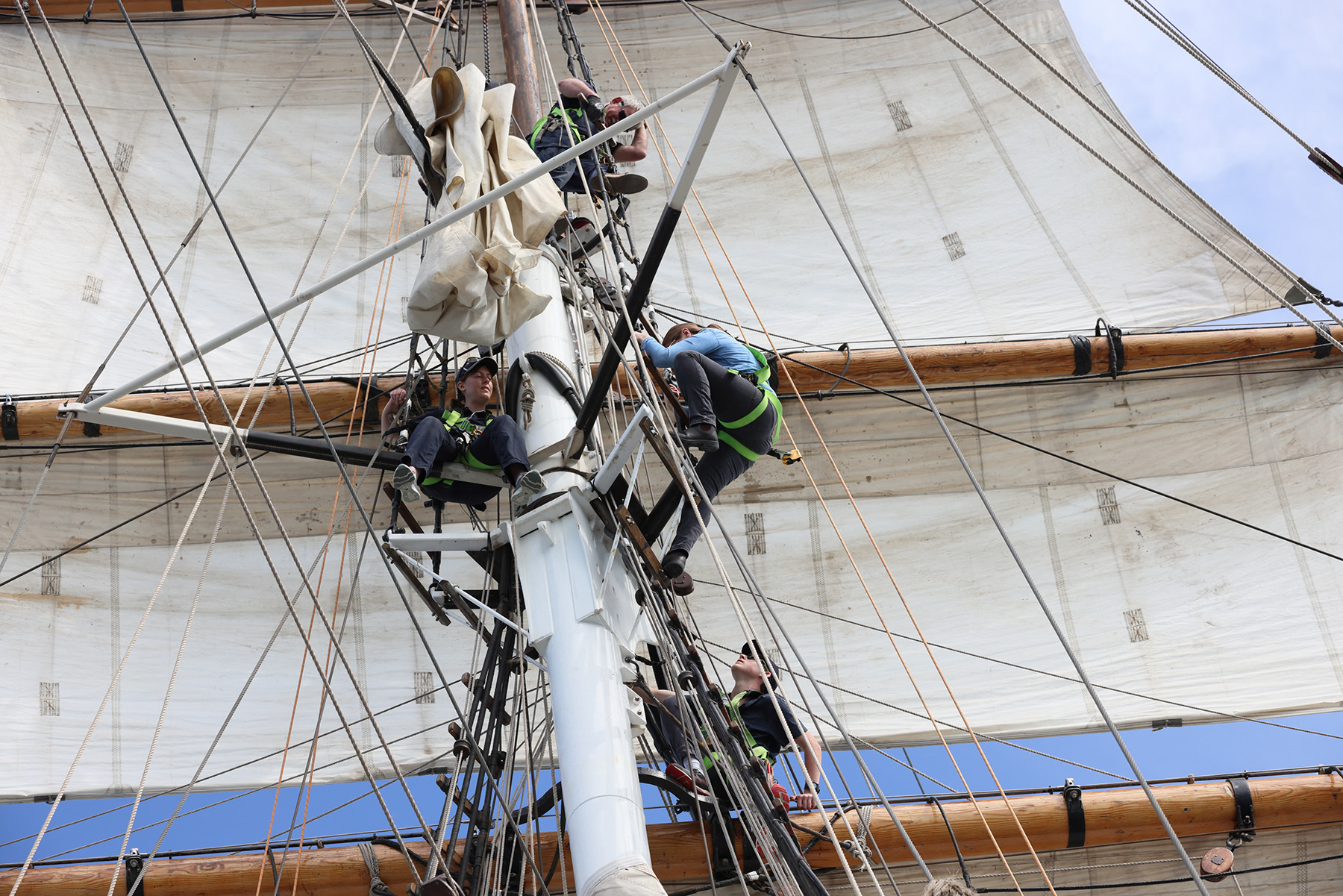 You’ve been given a set of well-used but top-quality wet weather overalls and jacket if the weather turns sour and you get to do whatever tasks you’re capable of or feel comfortable with. You don’t have to go up the mast, though you can, and of course, the crew must when setting the square sails. The more conventional fore and aft sails – there are 12 sails in all – can be set on deck hauling on halyards and sheets. 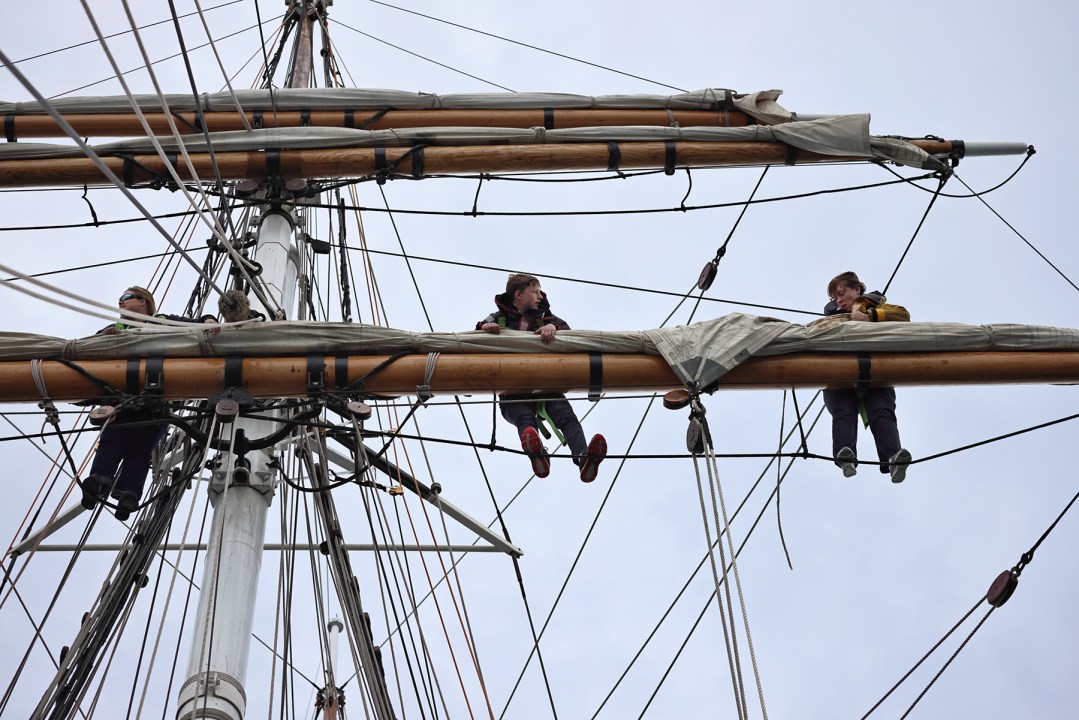 You learn a new language – heads and poop deck are not what they sound like, blocks and belaying pins, buntlines, clewlines, rat boards and sheets. Not much has changed over 200 years. 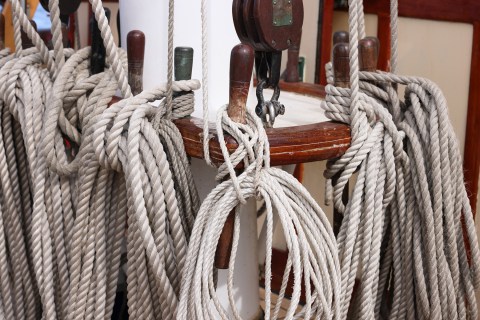 Below decks are the bunks, squeezy, curtained against the low red light left on overnight so the watches can come and go, divided into male and female sections with their own toilets and (very squeezy) showers. People who are 150cm tall, or short, will be very comfortable here. It’s surprising how quickly you adapt to all this. You have no choice.

The really important thing is what this does to the people on board. The COVID catchline was “we’re all in this together”, and it developed a few cracks. On board a sailing ship you really are all in it together and there can be no cracks. There is no place for egos or crankiness. Kids wearing hoodies and avoiding eye contact, says One & All executive officer Annie Roberts, soon give that up. After a few meltdowns – no phones, no screens, missing mum – they don’t want to leave the ship.

As well as being important when it comes to sail training for young people, it’s also part of the new course being set by the board as it attracts business and executive teams wanting to build a culture of teamwork and collaboration, especially as we recover from the COVID disruption. Any South Australian business or organisation wanting to reshape its corporate culture should consider this. It won’t fail.

However, Hugh Grantham says they now need to at least double their sailing days. Already planned for November are several “recovery” day voyages for those hit by the Kangaroo Island fires – about 200 volunteers, residents and students who all had their lives turned upside down will get a day away from it all. 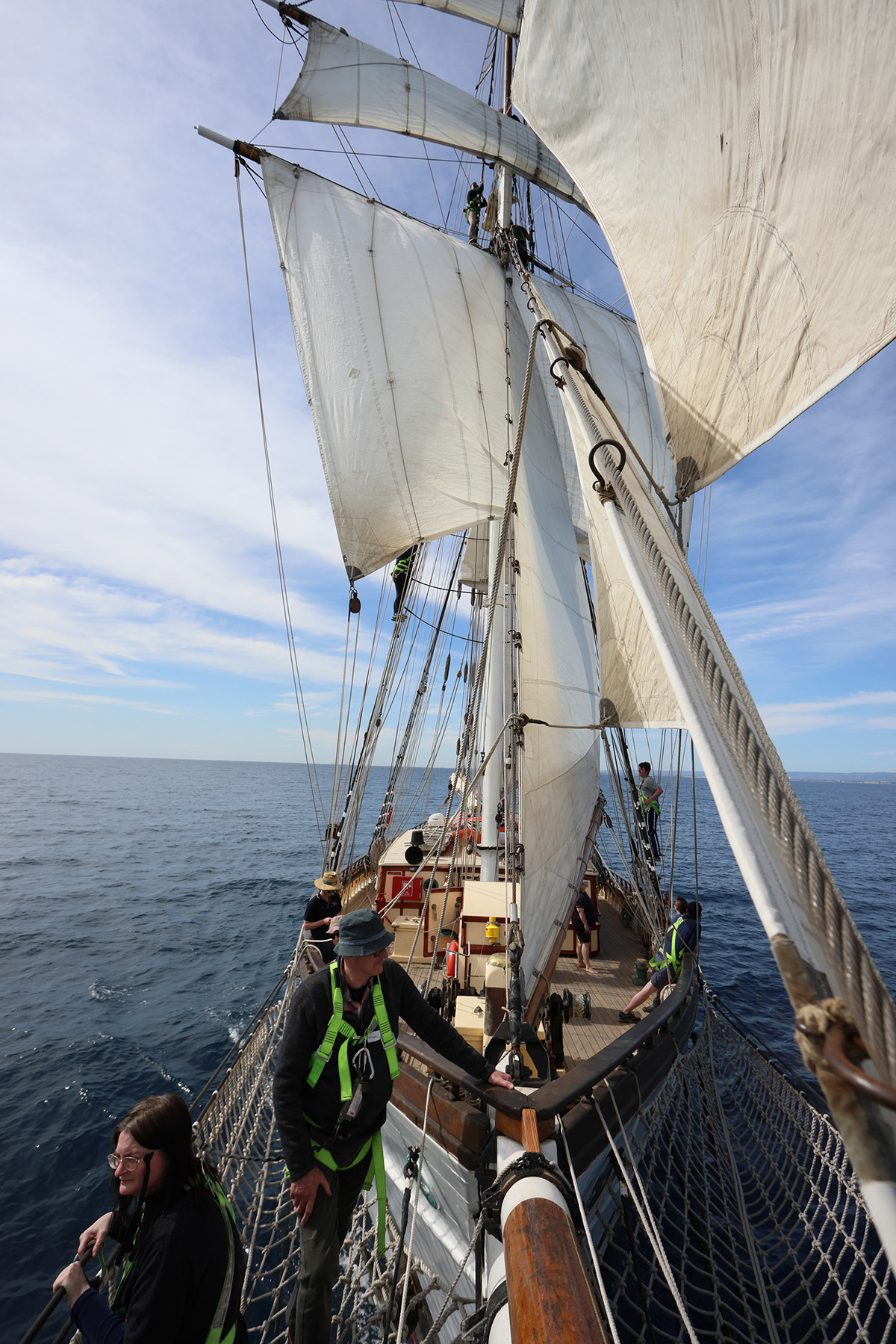 Roberts says they’re in the early stages of planning voyages for defence force veterans, with a pilot event set for November: “We’re hoping to do two or three voyages a year,” she says. “We think the impact will be profound.”

“We’re looking to partner with regional tourism groups; we’re already going to Port Lincoln for the Tunarama Festival and looking to go to Wallaroo for the Cornish festival,” Roberts adds. “It’s about making sure the ship is available to all South Australians. There are 11 tall ships in Australia, only two of them are operational – and one of them is right here.”

Grantham, a sailor all his life who has adapted his professional career so he can spend more time on the One & All, says the rule now for the One & All is to say “yes” to everything – and then work out how to do it: “Nothing is off-limits – youth development, of course, but also ecotourism, marine education, corporate team building.

“This is what tall ships do,” he says. “They take a group of people who don’t know each other and then teaches them to do a complex task together. We’ve created a launchpad to do anything we want.” 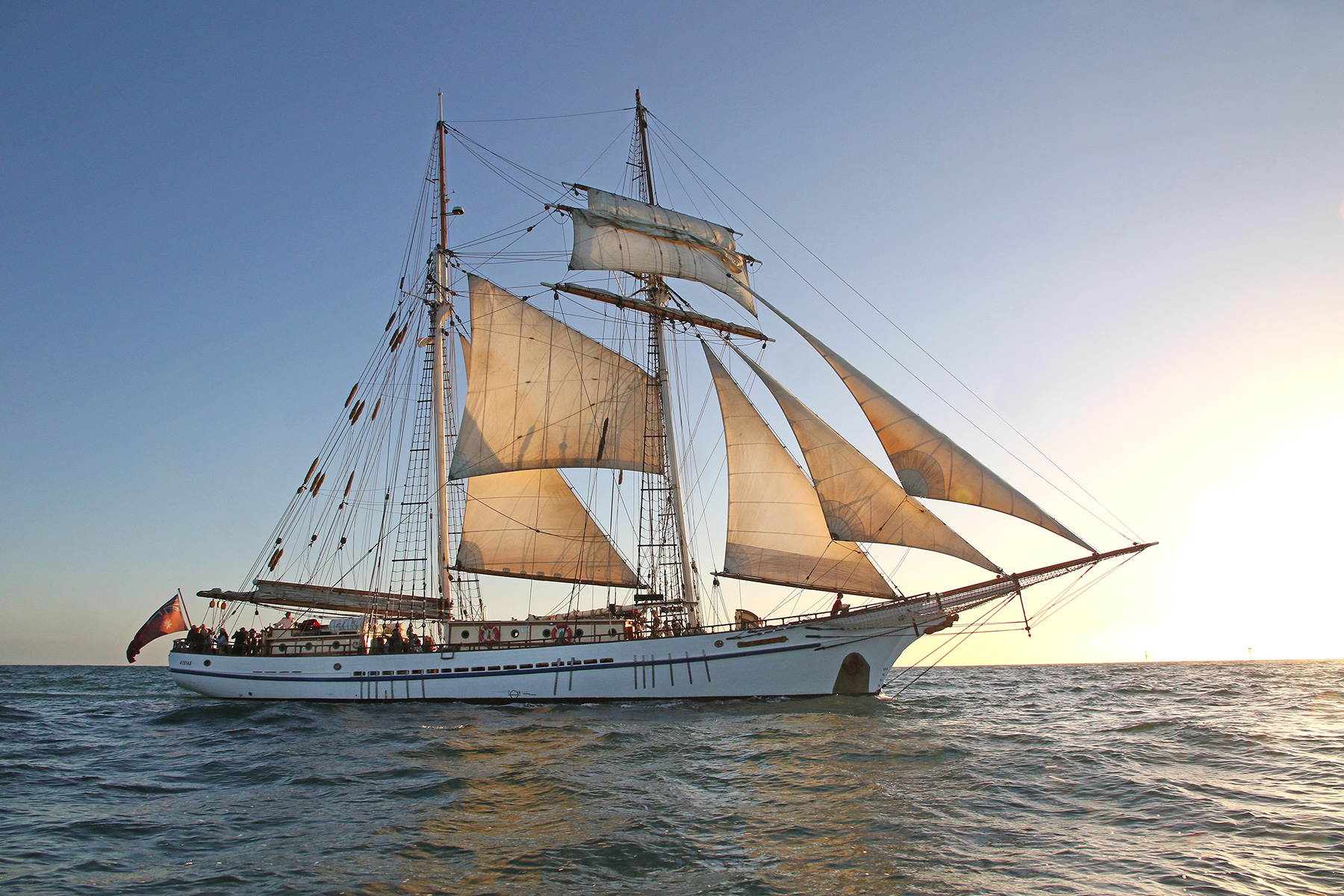