With 1.5 million copies of her eponymous cookbook sold, Fulton achieved significant public recognition for her work. In 1983, she was awarded the Medal of the Order of Australia. In 1997, she was inducted into the World Food Media Awards Hall of Fame and named as one of the National Trust’s original 100 Living Australian National Treasures.

Even more than that, though, she was trusted. Margaret Fulton, indeed, built her career on the provision of sound, trustworthy cookery advice. And she knew it.

In 1980, reflecting on her career, she recognised that her brand was built on reliability rather than novelty or extravagance, stating: “I believe my reputation is built on the fact that people can rely on me. Unlike other cookery people, I believe I’m doing the right thing by not being flamboyant. I know that’s the success of my business.”

According to her memoir, she originally dreamt of being a showgirl, but Fulton began her career during World War II on a public stage of a different kind – as a cookery demonstrator with the Australian Gas Light Company.

She gained valuable experience in retail – selling pressure cookers, and running the kitchen and homewares section of David Jones – before joining then-popular Woman magazine as a food writer in 1954.

At this time, she was also completing a professional cookery course at the East Sydney Technical College. Largely based on classical French cookery, she learnt recipes and techniques which stood her in good stead throughout her later career. 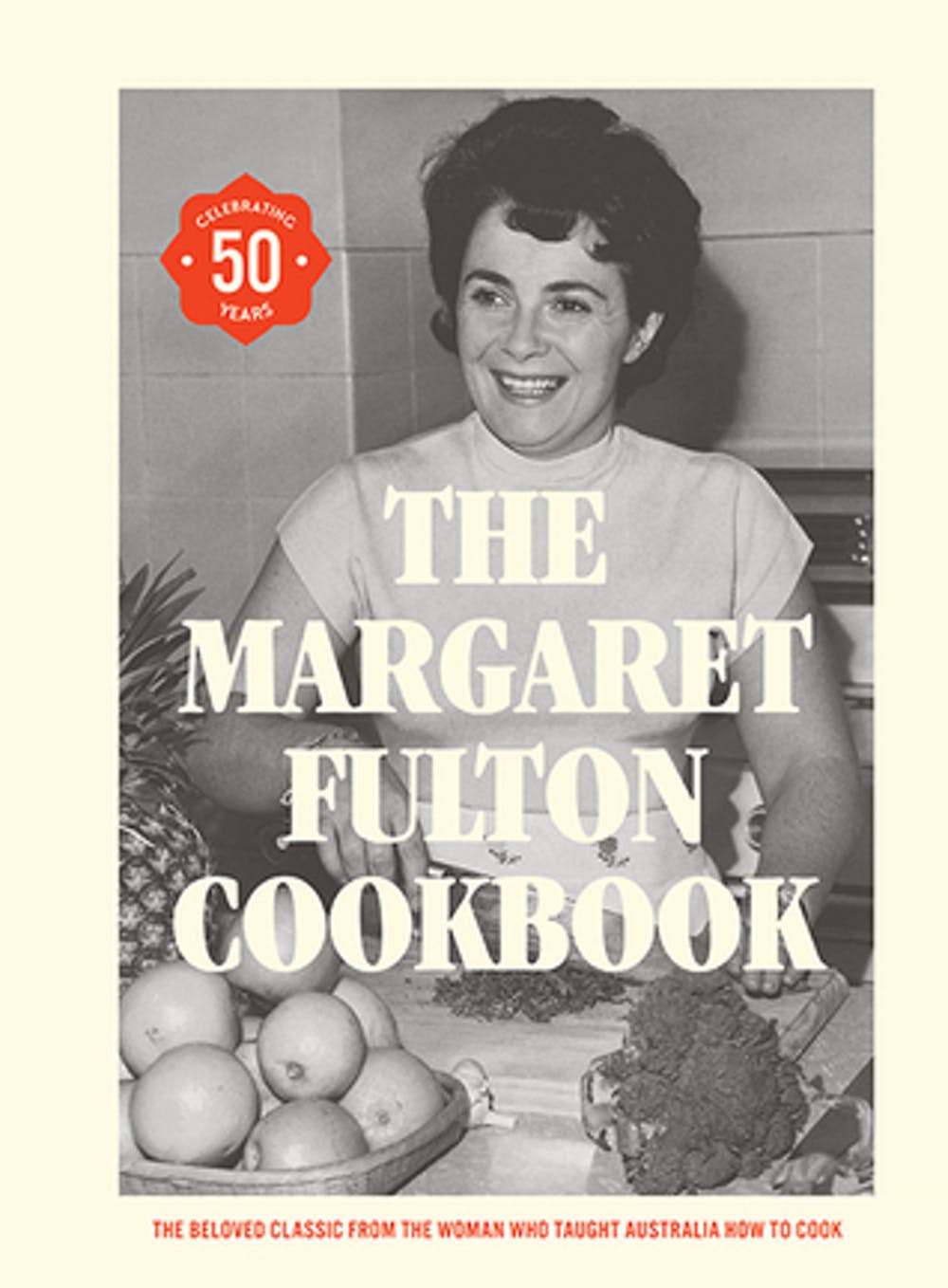 In 1955, Fulton joined the J. Walter Thompson advertising agency, managing a number of food accounts and, when television broadcasting started in 1956, began working on television commercials for such major food brands as Kelloggs and Kraft.

Fulton learnt much from this advertising experience. Although she was to appear in major television campaigns for ingredients and appliances, and publicise named products in cookbooks such as The Margaret Fulton Crock-pot Cookbook (1976), she was able to maintain her credibility.

In 1960, Margaret Fulton commenced a 20-year association with Woman’s Day as first a writer, and then its cookery editor. It was in this role that she was especially influential in exposing her readers to both new trends in ingredients and food preparation, as well as to reliable methods of reproducing traditional dishes.

Fulton was able to translate and popularise the dishes of post-war and other migrants to Australia, featuring Italian, Greek, Yugoslavian and other cuisines in her food pages.

The Margaret Fulton Cookbook was published in 1968. Unexpectedly selling out its then record first print run of 100,000 copies, it went to a second printing the next year, and many more after that. This book features step-by-step illustrated guides to not only how to cook the so-called “Continental” and “Oriental” dishes that have now become our nightly fare, but also how to eat them. There were, for instance, photographs of how to twirl spaghetti on a fork and illustrations of how to use chopsticks.

In the late 1970s, Fulton joined New Idea magazine as its cookery writer. At this time, while writing and promoting realistic and reliable recipes, techniques and products, she was also consolidating her own reputation in appearances in television commercials.

This mixture of reliability and creativity took her far from the food pages of women’s magazines. In 1980, for example, Fulton acted as the culinary consultant for Ansett Airlines, designing then-revolutionary snack boxes of sandwiches and fresh fruit for short flights.

By late 1982, a feature article in the Weekend Australian judged her to have had “more impact on the Australian kitchen than anything or person since the refrigerator”. Just a few months later, in 1983, Margaret Fulton’s Encyclopedia of Food and Cookery was published, cementing her place as the arbiter of Australian domestic cooking. When, over 20 years later, a revised and updated version of this volume was released in 2005, Fulton referred to it as her “life’s work”.

It was not until 1999, at the height of the personal memoir’s popularity, that Fulton published her memoir, I Sang for My Supper: Memories of a Food Writer. This was a brave act, for as well as cataloguing her achievements, this text revealed her to have met many professional, personal and financial challenges.

Long after reaching the age at which many others would have retired, her writing continued to be in demand. In 2001, Fulton co-authored Cooking for Dummies with Barbara Beckett. This book was published at the peak of the high profile series’ success.

Fulton had a long history of assisting the causes she believed in, including grassroots organisations. In 2003, she launched the second edition of a non-genetically modified ingredients True Food Guide for Greenpeace.

But it is her cookery writing that so many will not only remember, but continue to reach for. This writing truly came from her heart and although the purpose of her recipes was largely practical and educational, the results were intended to delight and nurture. On the first page of The Margaret Fulton Cookbook, she wrote, “I have always believed that good food and good cooking are part of all that is best in life, all that is warm, friendly and rewarding”.

Donna Lee Brien is professor of Creative Industries Creative Writing at CQUniversity Australia and has been researching and writing about various non-fiction genres of writing since the 1990s. This article is republished from The Conversation under a Creative Commons license. Read the original article.