A collection of old, gnarled whisky barrels marked in chalk lettering sits in a shed out the back of Woodstock Wine’s McLaren Vale cellar door.

This dusty shed is not part of the usual winery tour and looks like a space the winemaker has forgotten.

However, there is deep yet uncelebrated winemaking at work here.

Woodstock’s third-generation winemaker Peter Collett dips a spear into a barrel marked “VOFD” and pours it into a glass. The rich, fortified wine sticking to the sides is the colour of coffee and has a viscosity of molasses or balsamic vinegar.

Port drinkers (who are few in number these days) might be familiar with the term Very Old Fortified. 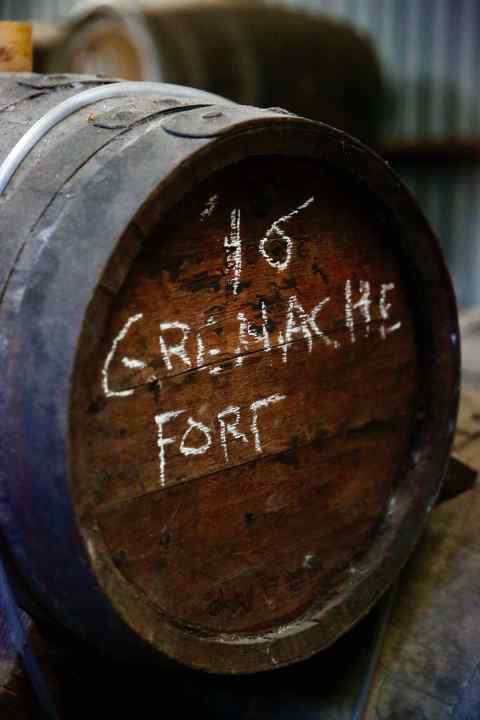 In this case, Peter is showcasing Very Old Fortified Dark – “The really good stuff,” he says, which is even older.

The barrels of fortified wine in this shed have been maturing for up to 50 years, and each year about five per cent of the wine is lost to evaporation, known as the “angel share” – a key part of fortified wine production.

The chalk-scrawled classification system ranges from Tawny through to Very Old Fortified (VOF) and then Old Secret – the best stuff.

“It’s pretty obvious when it starts getting to VOF, the wine is much darker and those tawny pigments are really starting to concentrate,” says Peter, whose family has been making fortified wines like Port for 70 years.

“When it starts to get a khaki-green tinge you know it’s getting up about the 20-year mark, but that could be just one of those winemaking myths.”

Peter and his brother Max are caretakers in the art of fortified wine, using knowledge passed down from their father Scott Collett and grandfather Doug Collett.

It is an unsung skill these days, but one the brothers are passionate about.

“When we were kids, Dad would have us here every weekend helping to make fortified wine,” says Peter.

“I’ve helped with making port ever since I was a kid because it’s a lot of physical work, and now I’ve taken the reins from Dad over the past few years.

“For my dad, it’s just the most valuable stuff. He doesn’t ever let a single drop go to waste; no other winemaker would do that – it’s precious to him, a very premium thing.”

Peter is now looking to bring his family’s long-time labour of love out of the dark shed and into the spotlight.

“We think it’s due for a renaissance,” he says.

“There’s a whole new generation coming through and I believe that we can ignite a spark and spread a new appreciation for fortified wine.”

Through this tasting flight, Peter hopes to connect a new generation that may never have experienced wines like Port or Muscat. 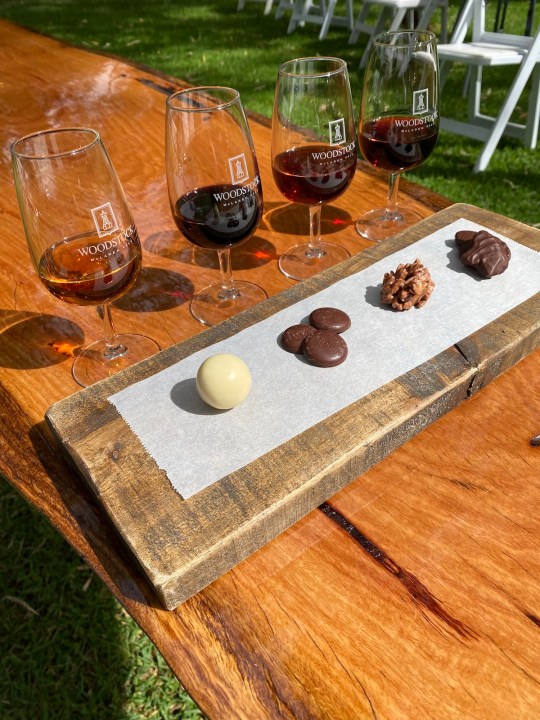 “We’ve hosted groups of younger people who haven’t been exposed to fortified wine before and they’ve really enjoyed it,” says Peter.

“They like the ritual of serving it, and a lot of people have an association with camping and fires and that kind of thing.

“It’s either nostalgic or really new to people.”

Peter hopes it might help people discover the nuances of port, which suffers a bad reputation.

“Fortified wines can be diverse, not like the terrible flagon of tawny that your grandma always had in her kitchen cupboard,” says Peter.

“It can be really nuanced and complex, and it can pair with lots of different things, from dessert to cheese and chocolate.

“To compare different ages and explain why the wines taste the way they do is part of the magic.”

It was while hosting a stall at CheeseFest 2021 that Peter realised there could be an untapped appetite and interest in fortified wine.

“Cheese is a great pairing and we sold out of fortified wine at CheeseFest, so we wanted to do something that we hoped would broaden the appeal and get more people enjoying it,” he says.

“I have been surprised how well the chocolate pairs with fortified wine, some of the combinations complement each other extremely well.

“Port isn’t something that a lot of young people really talk about, so it excites me when it’s new to people and they really enjoy it.”

While most of Woodstock’s fortified wines are at an affordable price point, the Old Secret Rare Fortified, a top-shelf variety, goes for $450 per 150ml bottle.

The story behind Old Secret goes that the winemakers discovered long-lost barrels in an old storage shed. They turned out to be full of a rich and dark wine of an undetermined age.

“It’s one of the most complex, interesting wines I’ve ever tasted.

“Fortified wine is a labour of love for us, and although it is a lot of work for something that we don’t sell a lot of, I’d love to see people start to enjoy it as much as we do.”