Once an institution in South Australian country towns, today humble main street lolly shops are doing it tough. However, since taking over Stirling’s lolly shop less than two years ago, Scottish expats Helen and Tim McNamara have turned the business around and garnered a strong local following.

A key to the renewed popularity of Hokey Pokey has been the use of donated home-grown produce in a novel range of sorbet and ice cream flavours that change with the seasons.

Helen, a former chef and caterer, makes all of Hokey Pokey’s ice cream from fruit, vegetables and herbs donated by locals, as well as produce the McNamaras have grown in their own garden.

On a daily basis, Adelaide Hills residents drop off boxes of home-grown goods — from figs to rhubarb, lemons, blackberries, mint, passionfruit, and plums. Helen recently made a batch of ice cream using a donation of loquat fruit.

Some generous fruit donors get a kick out of returning a few days later to sample ice cream that has been made with fruit or herbs out of their own garden.

“When people found out that we make everything fresh from local ingredients, it really kicked off,” Tim says. “I always offer free ice cream in return for the produce, but most people don’t accept it.

“They just don’t want their fresh fruit and herbs to go to waste.” 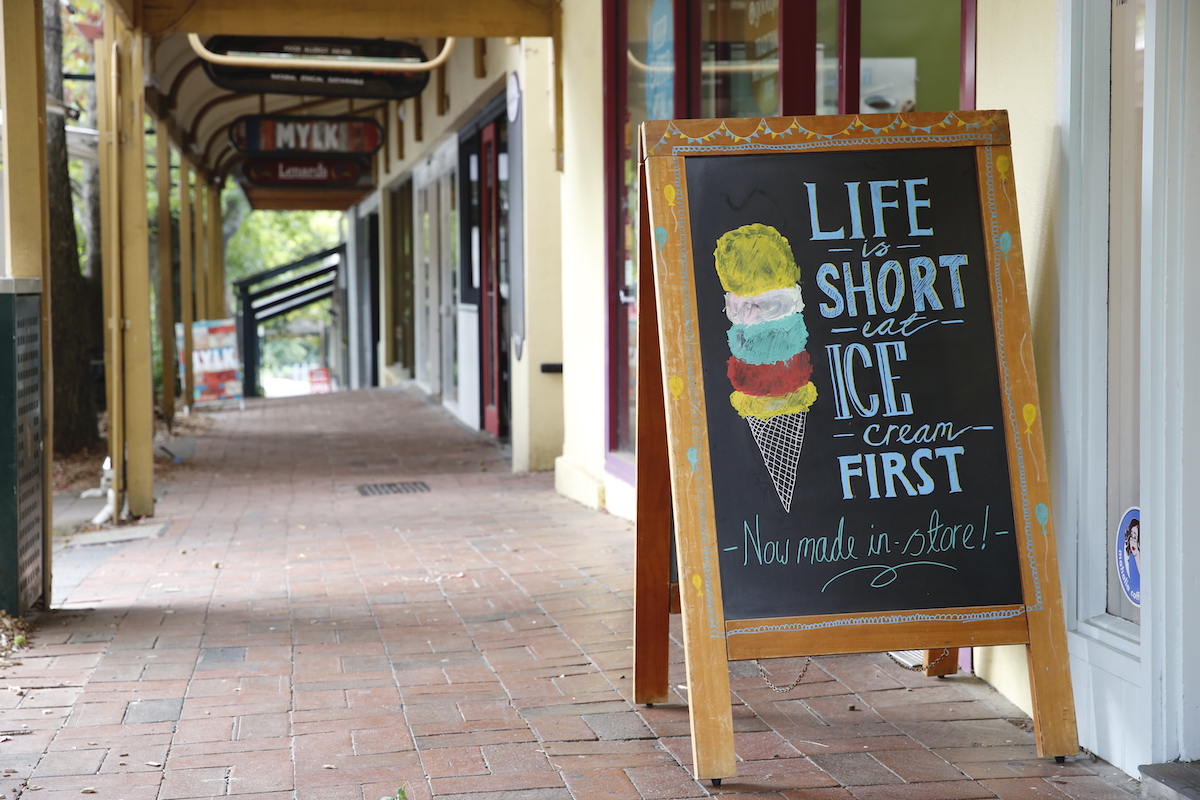 Plums are stewed in the slow cooker for 12 hours and cooked down until they become caramelised and sticky, before being mixed or swirled into ice cream. The shop is often full of the smell of stewing fruit, or mint and citrus being chopped up. Helen also makes chocolate, ice cream, truffles, fudge, nut brittle, and milkshakes.

“We’re often given varieties of fruit that I’ve never seen before. It keeps the flavours changing quickly, which is really good for us,” Tim says.

Tim installed a pair of salvaged timber windows at the front of the store, and also completed a major project to renovate a dilapidated horse float as a pop-up ice cream cart for country shows, birthday parties, and weddings, which had allowed the business to reach more customers than ever.

With the help of local artist Lucinda Penn, Hokey Pokey has injected a burst of colour into the main street of Stirling with a bright mural on the side of their shopfront.

“The Australian lolly shop is such an institution a lot of country towns used to have them and still do, but they’re struggling against the supermarkets whose prices are hard to compete with,” Tim says.

“This shop had been on the market for some time. With Helen being a chef, we wanted to build it into something more.” 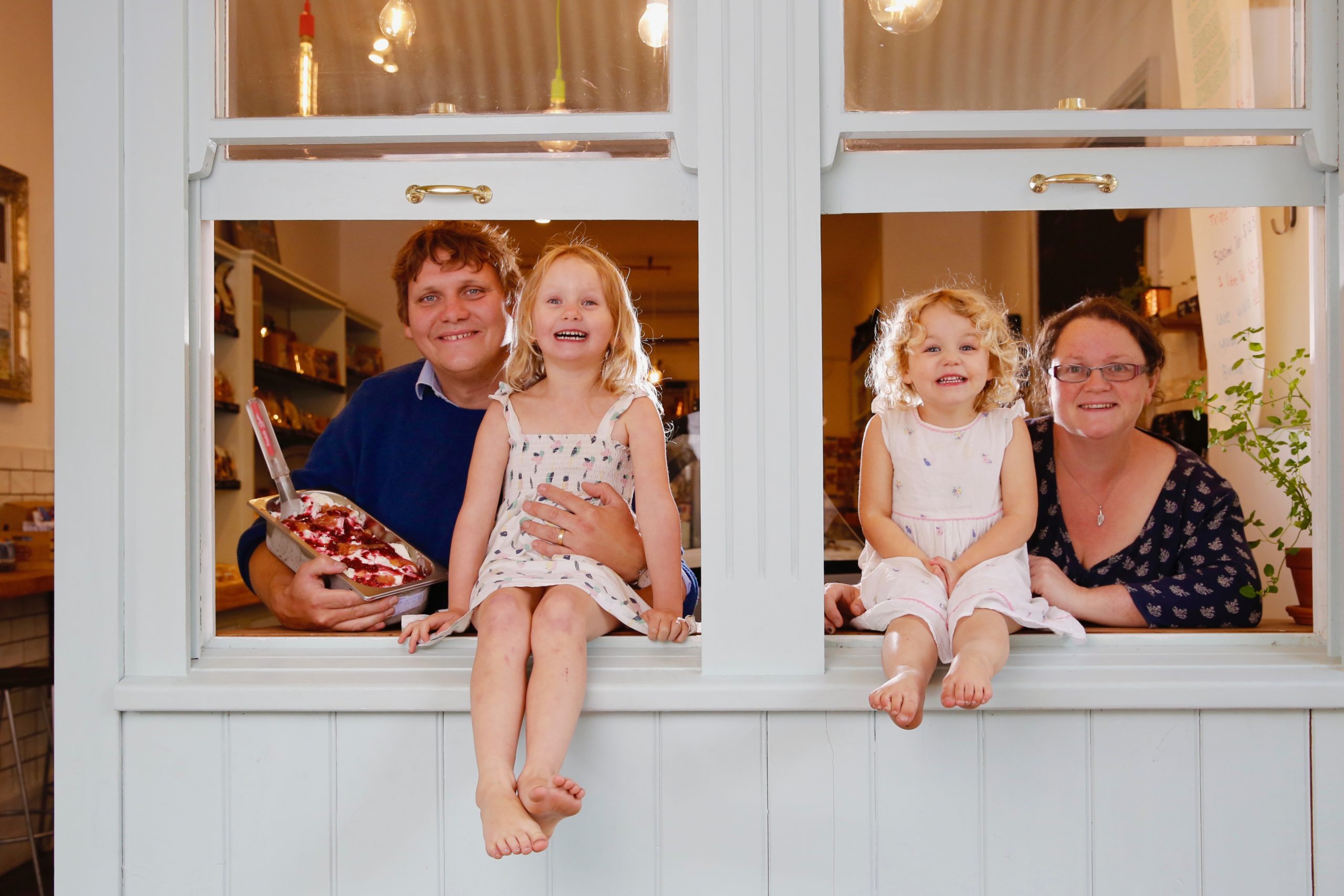 With a focus on simplicity, sorbets are made traditionally with unprocessed ingredients. The dark chocolate flavour is made with 80 per cent cocoa, which gives the ice cream a bitterness and a smooth consistency.

“It’s a traditional process like something you’d do at home; what people have been doing to make jam for ages.”

Unfortunately, having overcome the challenge of reinvigorating the business, they are facing an entirely new obstacle with Coronavirus restrictions meaning Tim has had to cancel several birthdays, country shows and events.

“We do birthday parties now, but we’ve had to cancel them, which is heartbreaking.” 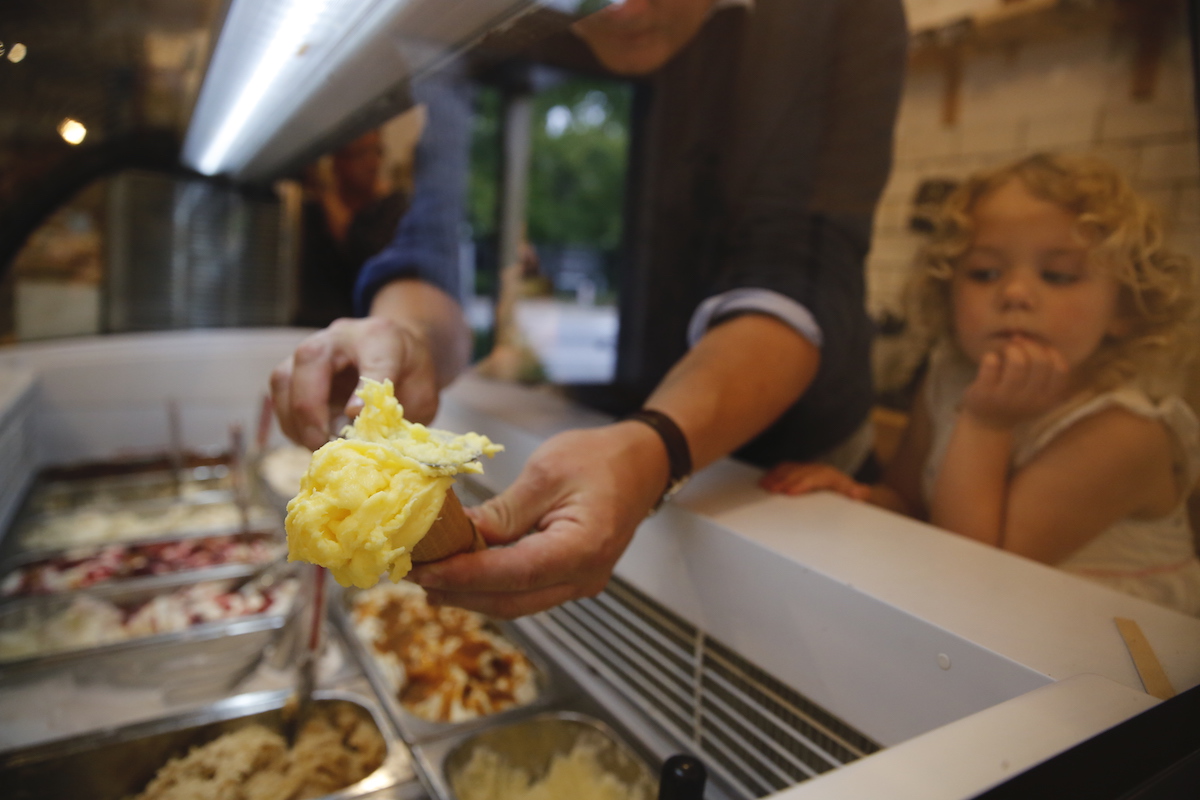 Still in good spirits, Tim jokes that he was hoping for a panic buy-up of ice cream.

“If we had a queue out the door, it would be great. But right now, there’s no shortage,” he says.

Takeaway tubs of ice cream are available as always — with the new shop windows meaning customers don’t even have to step inside the store if they don’t want to.

If restrictions continue to tighten, Tim says he’ll do whatever it takes to get ice cream and other treats to his customers.

“There’s a lady who comes in for her Dutch licorice every week and has done so for many years. It would be heartbreaking to stop that. So even for $5 worth of licorice, I will drop that off at her house.” 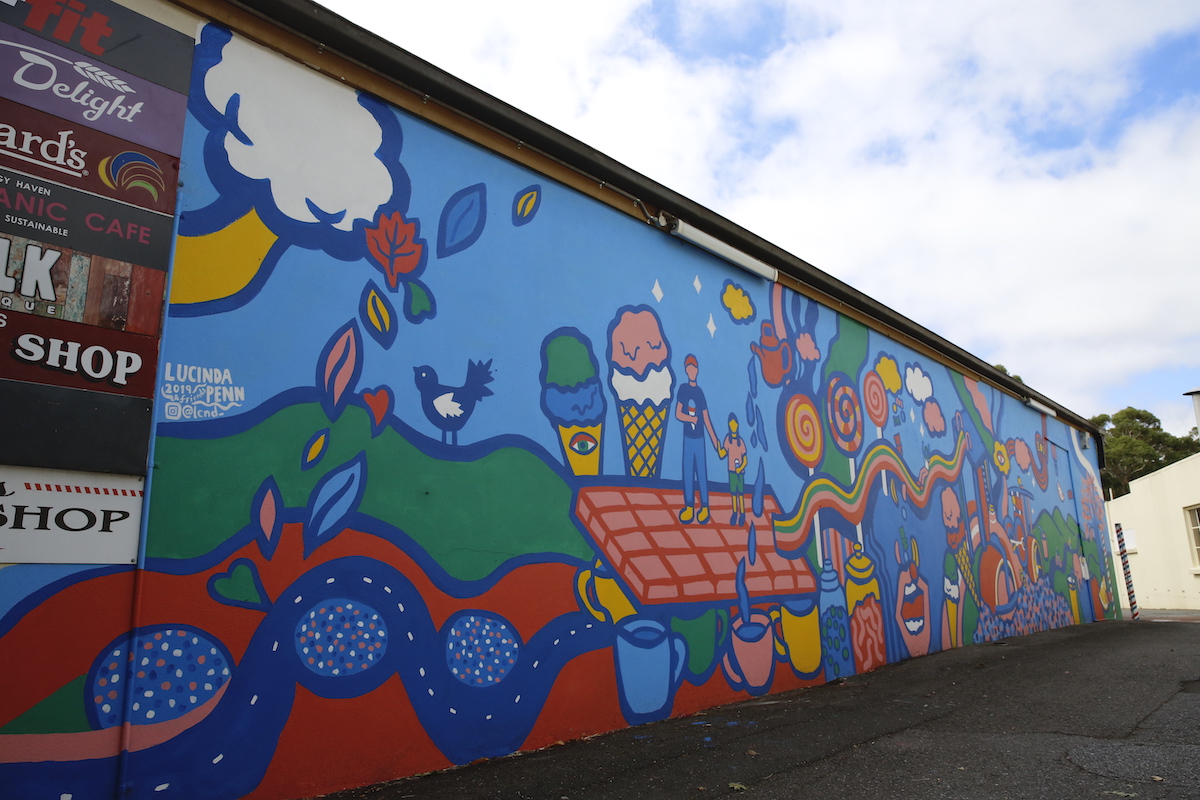 Painted by artist Lucinda Penn, the bright mural at Hokey Pokey has injected colour into the main street of Stirling. Photo: Ben Kelly.

For years Tim has worked behind bars and in restaurants in the UK, but he never envisaged that he would be running an ice cream shop. The couple migrated from Scotland to Australia three years ago, when they sold their restaurant and catering business, as well as their family home, to move to Australia.

“We came out here in our early 20s and spent a year working, while doing a little bit of travelling, and loved it. We never got over it and decided to come back,” Tim says.

The ice cream flavours are somewhat inspired by Helen’s experience living in Florence while taking a gap year from university. It was in Italy that she absorbed the purist methods of Italian gelato-making.

“We find a lot of ice cream is just too sweet,” Tim says. “Our sorbets tend to hover somewhere between gelato and ice cream, depending on the flavour.”

Children are transfixed once they step into Hokey Pokey, hypnotized by the colourful giant freckles, chocolate, sweets, and ice cream.

“You come here and people are happy — it’s a safe zone away from fear and stress. It’s good for your soul.” 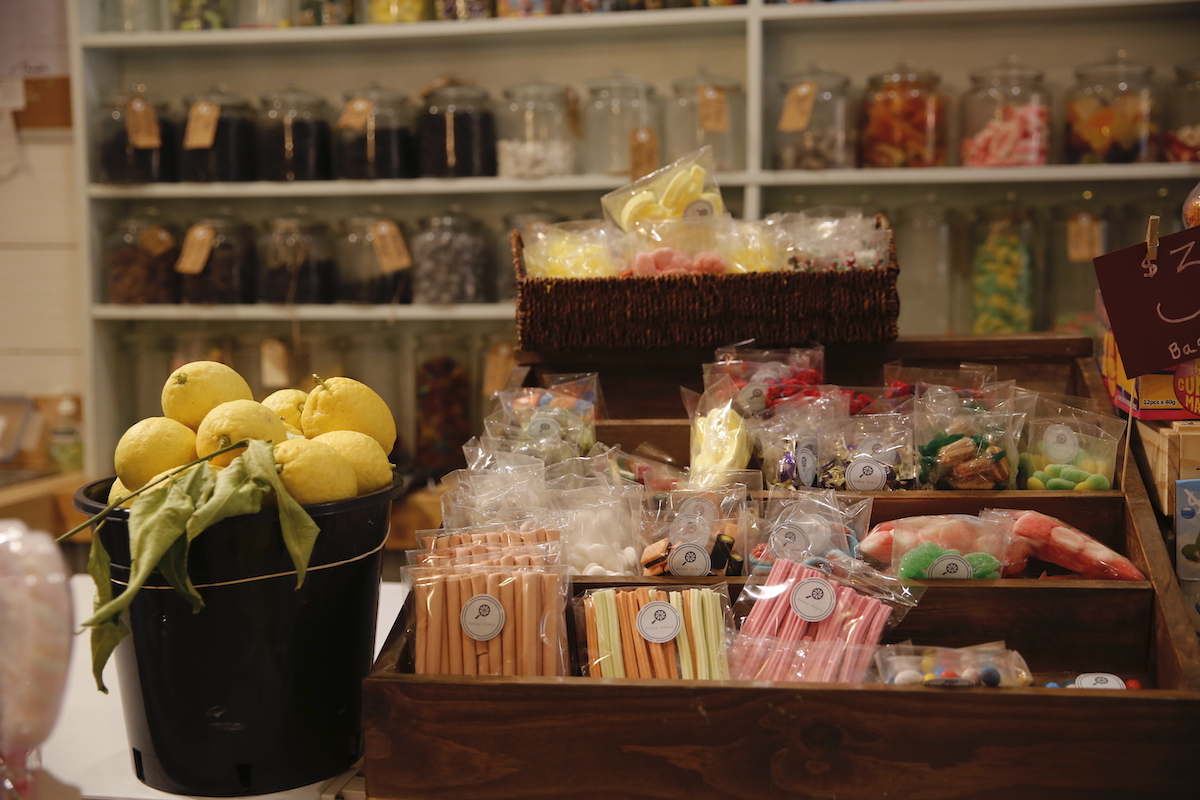