Damien is from Adnyamathanha country and some of his fondest childhood memories involve visiting his grandparents in Nepabunna, in the northern Flinders Ranges – gathering fresh urti (quondong) while walking on country with his Nana, trying foods such as nori (the sweet sap from acacia trees) and witchetty grubs with his Pop, and learning about his Indigenous heritage along the way.

Damien Coulthard with partner Rebecca Sullivan in a photo from their cookbook, Warndu Mai.

He remembers making damper – “we called it a twisty” – with his Nana on a campfire behind her home from the age of around four.

“You’d pick the stick out and Nana would make the dough … we’d help but she was never happy with my kneading of the dough, because I wasn’t very good at it,” he laughs.

“She’d wrap the damper around the stick and you’d cook it in the charcoal, then you’d pull it off the stick and eat it as quickly as possible, dripping with honey and butter. It’d make a mess but when you’re that age I suppose it doesn’t matter… it was something Nana did with all of us growing up.”

Later, when his grandparents moved to Quorn where Coulthard lived as a boy, they ran a NAIDOC Week event at the local school: “Pop would cook kangaroo in the ashes of the fire and Nan made the twisties – it was a unique experience for the school kids and a lot of my friends.”

He says his memories of his early experiences on country, many of which revolved around collecting food and cooking it with extended family, helped inspire the Warndu food business.

“It’s given me a deeper appreciation of culture and what it means. Learning about culture is all about experience.”

Turn out the dough onto a floured surface and knead until smooth. Dust with flour, place on a baking tray and bake in the oven for 15–20 minutes, or ideally wrap in foil and cook on a fire in the ashes. Damper is always best eaten hot with lashings of butter.

Note: Try playing around with any bush spice until you find your favourite. This is best cooked in a fire but an oven will do just as well. 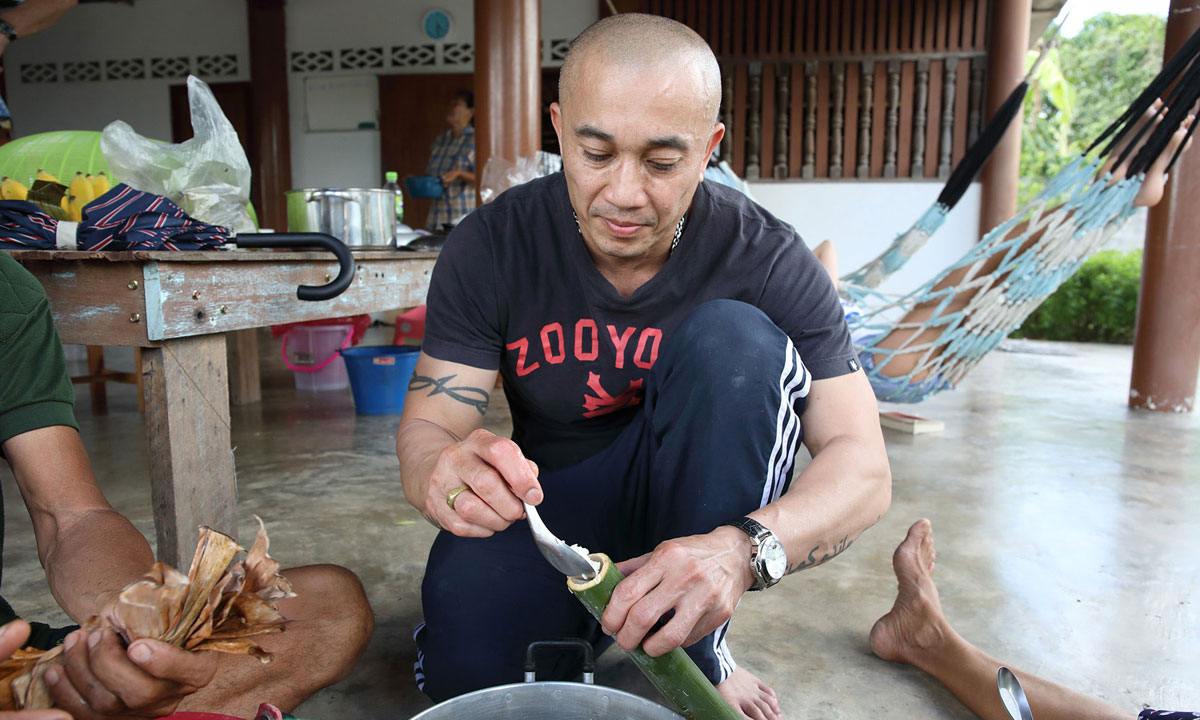 Chef Nu Suandokmai originally learned to cook on his family farm in Ang Thong, about 100km north of Bangkok, and is celebrated for bringing traditional Thai flavours to Adelaide – first through his Nu Thai restaurant and now at Lantern By Nu.

Nu travelled back to his family farm in Thailand with writer Nigel Hopkins (with whom he shared the memory below) and photographer Tony Lewis while working on their recent book Fire and Flavour: Nu’s Food, published by Wakefield Press.

“While I learnt most of my cooking from my mother, there’s one dish that my father taught me while he was still alive, when I was about 10 or 11 – how to roast a chicken inside an empty oil tin surrounded by a fire of rice stalks,” he says.

“We always did it at the end of the rice harvest, so it was really a very seasonal celebration dish. Of course, traditional Thai village houses don’t have ovens, so conventional roasting is impossible.

“Another popular way of cooking chicken, very much a street food favourite, is bamboo chicken – where the chicken is cut through the breast bone, and kept splayed out by bamboo skewers while being roasted over charcoal.

“But this way of roasting chicken is different, with the smoky flavours of the rice stalks coming through. Best enjoyed with a bottle of ice-cold Singha or Chang.”

To make the nam jim dipping sauce, crush the chillies, garlic and pepper using a mortar and pestle. Put in a bowl, add the remaining ingredients and mix.

Using a mortar and pestle, crush the garlic, salt and peppercorns to a rough paste. Rub half of this mixture inside the cavity of the chicken with the crushed lemongrass and coriander root.

Mix the remaining crushed garlic and pepper with all the sauces in a bowl, rub on the skin of the chicken and leave to marinate for one hour in fridge.

Fill a long-neck beer bottle with cold water and insert neck into the chicken cavity. Cover the chicken with banana leaves, sit the bottle upright on the ground and place the oil tin over chicken and bottle.

Cover tin with rice stalks or straw and cook for 45 minutes to one hour, constantly replenishing the straw.

Soup for the soul – Rosa Matto

Chef, cooking teacher and food tour leader Rosa Matto was born in Adelaide to parents who emigrated from the Campania region of Italy, and says her great love is inviting people into her “rather chaotic kitchen”, plying them with simple food and wine, and regaling them with tales both true and embellished. 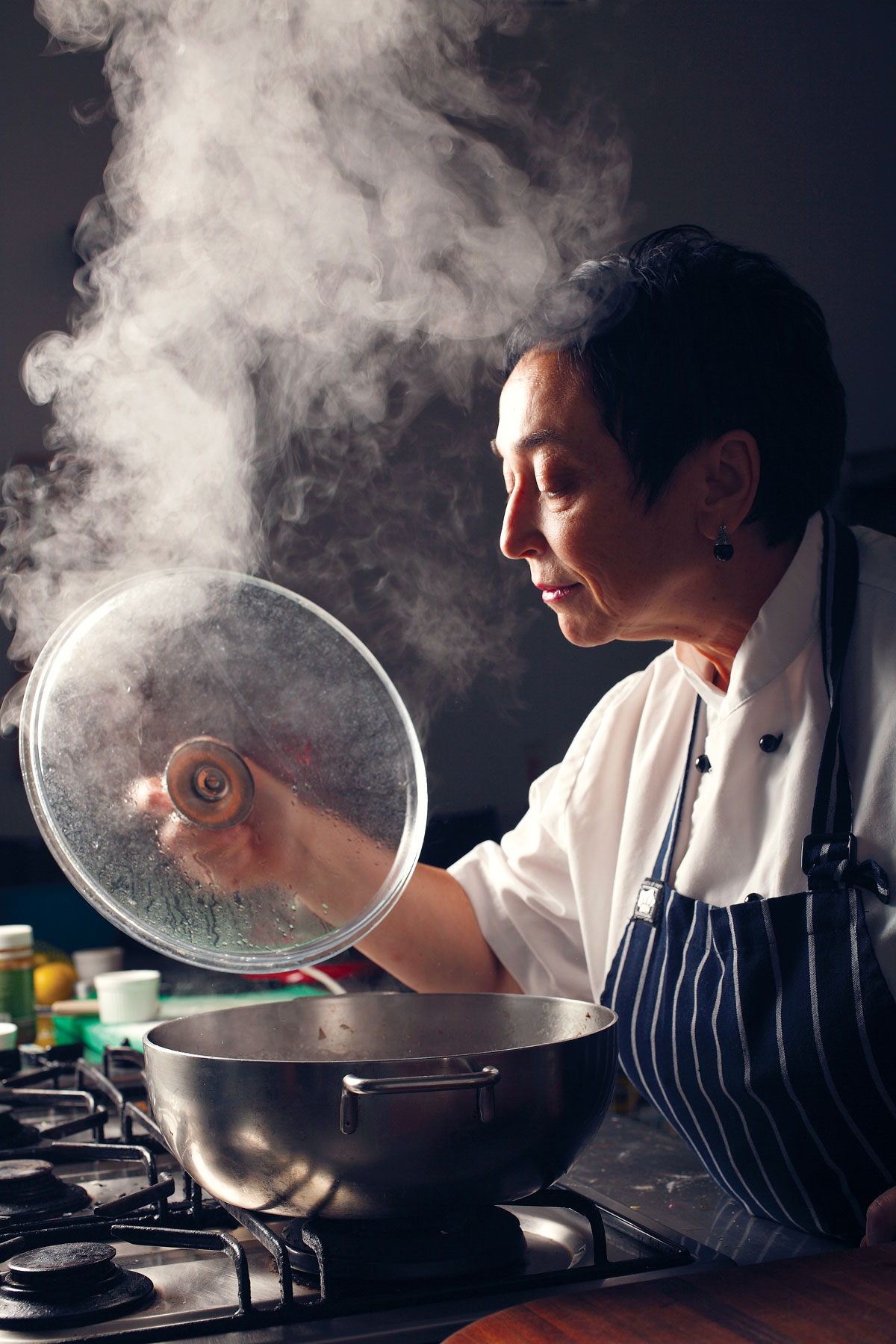 “In my family, any calamity – from a failed exam paper to news of a sudden death, and everything in between – was soothed, if not solved, by ‘brodo’. This means that there is always a frozen chicken carcass in the freezer in case the phone rings with dark news.

“The finer principles of science were often lost on my dear mother; it made perfect sense to her that the smaller the bird, the more concentrated the nutrition. It was nothing for her to catch a bus into the Central Market to buy a pigeon or a handful of quails to make her delicious brodo if one of her precious grandchildren had a fever, a broken heart, or a dilemma that hugs and sage advice could not solve.”

In her blog, Matto recounts an occasion when she made a “saucepanful of the clearest chicken broth for a friend in the wars”.

“The colour was a rich, polished gold, tiny speckles of fat danced on the surface. In a separate container, I took the shredded chicken meat and I included a packet of pastina – the smallest of pasta shapes for her to boil and add, if she felt up to it.

“When I arrived, the sitting room was a mass of perfumed flowers. I was shocked that it had not even occurred to me that a bunch of peonies could help in this situation. ‘What’s wrong with me?’ I thought.

“I untied the tea towel, lifted the lid of the saucepan to reveal the medicinal potion – a pungent aroma filled the air, the ‘patient’ swooned with anticipation. I was vindicated.” 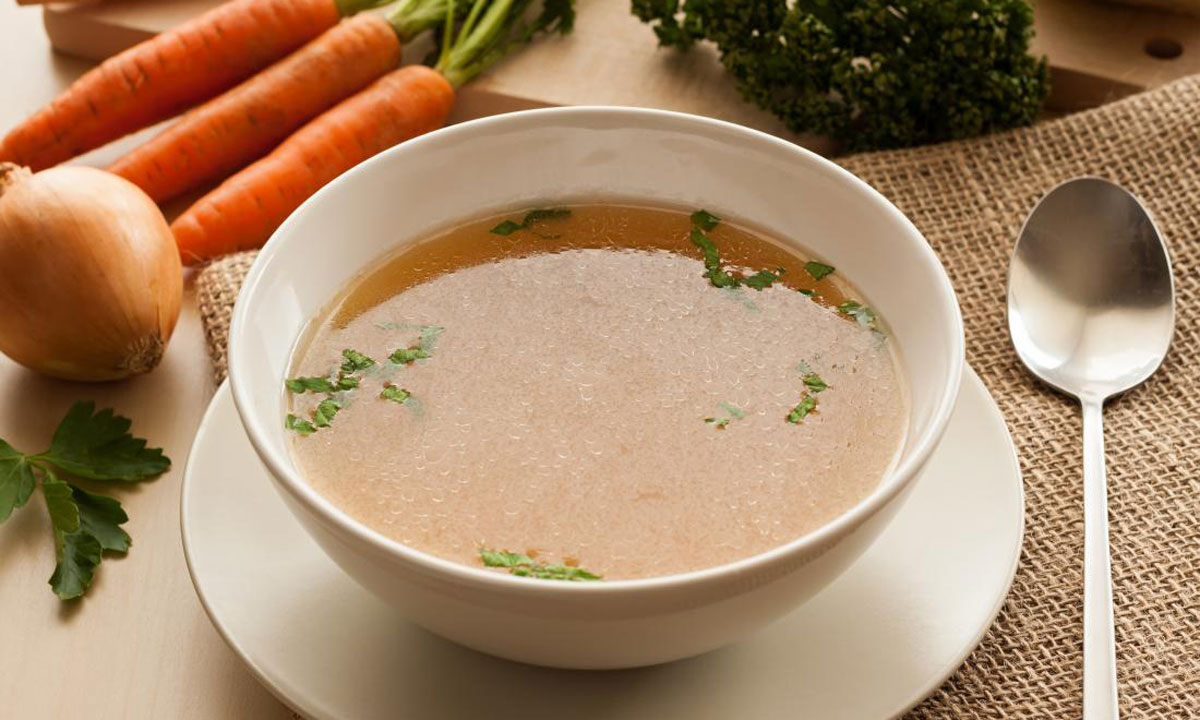 Place the carcass in a medium heavy saucepan, cover with 2-3 litres cold water. Gently bring to the boil, skimming off any scum that rises to the surface.

When cooked bits of protein are no longer coming to the surface of your broth, add the onion, carrot, celery, garlic and parsley. Simmer, without ever allowing to boil, for 1.5 hours to 2 hours maximum. Do not cover and do not add salt.

Strain well, and discard the bones and vegetables, but first take off any meat from the bones. Skim off excess fat from the surface, but leave a little for flavour and goodness. When ready to serve, taste for seasoning and adjust.

If you want a more concentrated flavour, reduce the broth by volume after straining, but do not simmer it any longer than 1.5 to 2 hours as this starts to break down the bones and implants a metallic flavour to the broth as well as making it cloudy.

(Add cooked pasta, blanched vegetables, the shredded chicken meat from the carcass, tiny meatballs, gnocchi or matzo balls. Don’t cook the pasta in the broth as it makes your soup cloudy.)