If your idea of beer with food is limited to a pint of bitter with a burger or parmy at the pub, then you might need to get out more.

With beer degustations – or “beergustations”, as they are sometimes dubbed – popping up all over Adelaide, these days diners are likely to encounter combinations ranging from an award-winning India Red Ale with Singapore curry crabs to a Strawberry Milkshake IPA with blue cheese cake.

“It’s a fairly new concept to the Australian marketplace,” she says.

“In Europe, it’s not that unusual to consume beer with your food, but here in Australia, because traditionally our beers have been so bitter, they haven’t enjoyed the flavour and aroma profiles that wine has had.

“But with craft beer we have just as much flavour and aroma and there’s no reason why we can’t do food and beer at that same level.”

Prancing Pony is leading the way in local beer degustations, having previously teamed up with venues such as La Boca and the Ibis Hotel to host dinners. Its next event, Rigoni’s at the Ponies, will see Adelaide dining institution Rigoni’s Bistro present a five-course Italian meal matched with Pony beers at Prancing Pony’s Mount Barker Brewshed on June 16.

It’s the first degustation to be hosted at the Brewshed. The menu – designed by Rigoni’s chef Tony Bailey in consultation with the brewery – will include dishes such as confit potato, fermented black garlic, truffle and gorgonzola dolce calzone, matched with the Indie Kid Pilsner; slow-roasted Hay Valley Lamb shoulder with polenta, peas and pesto, matched with the Amber Ale; and dark chocolate marquis with pear gel, persimmon ice cream, pistachio praline and candied mandarins, matched with the Black Ale.

Liebelt says the key to a successful beer and food marriage is ensuring the flavours are well-balanced, so the beer doesn’t overpower the food it is matched with. Chefs can choose dishes that either complement the flavour of the beer, or provide a contrast to it.

“You’re looking at the base flavour notes in the beer … so if it’s a really sweet, multi-style beer, do we want to match it with a sweet, dense chocolate cake or contrast it something that will be a bit more refreshing in comparison?” 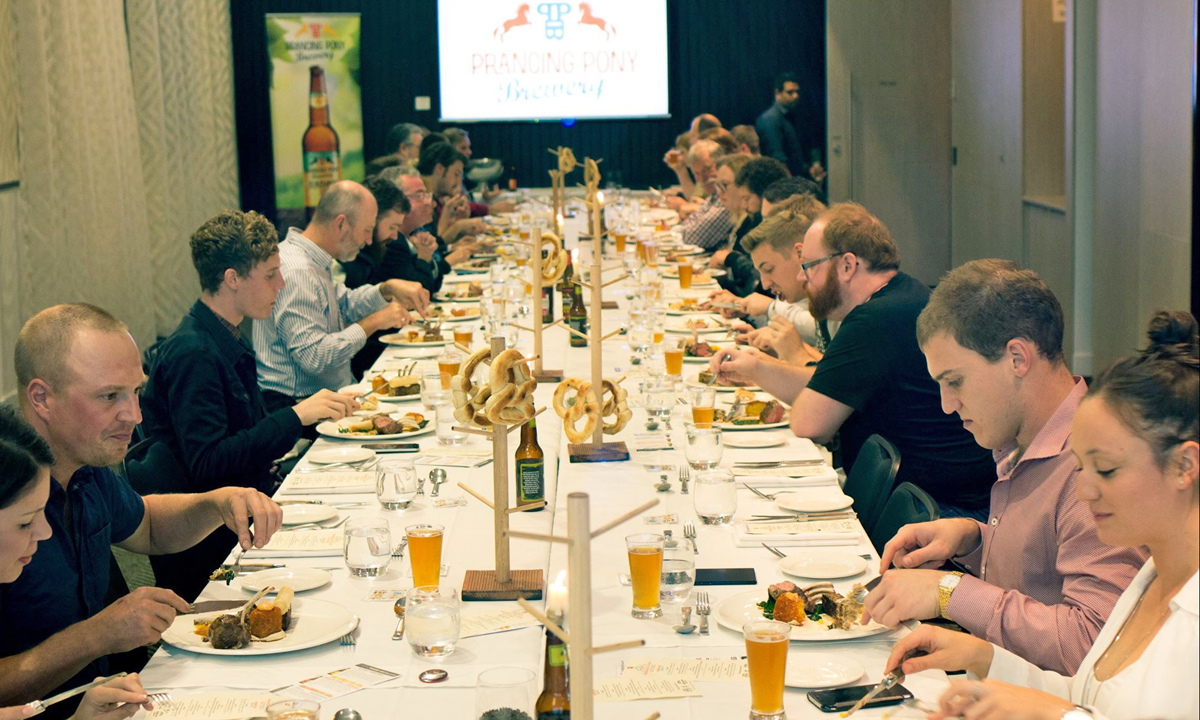 Among some of its recommended pairings are the award-winning Prancing Pony India Red Ale with spicy foods such as Singapore curry crabs or Spanish paella, the Amber Ale with barbecued meats, and the Sunshine Ale with tropical fruits, cheeses and Thai salads.

Because of the brewery’s large range, Liebelt says it can find a match for most foods.

“We can match anything from fresh Thai-style and Indian food through to traditional pub food to Italian food.

“Give me a French restaurant and I’ll find a way to match our beer to it.”

Among those getting in on the beer degustation action is Feathers Hotel at Burnside, which last week hosted what it described as the first of a new series of “BeerGustation’ dinners in its Greenhouse Restaurant, with a five-course meal matched to beers by Pirate Life.

At HQ Complex restaurant The Hindley, which closed this week, chef Shane Piercy recently served a four-course dinner alongside James Squires beers, where he says the most popular offering was a spicy fish broth with steamed SA snapper and Boston Bay mussels, matched with Squires’ Swindler Tropical Ale.

Miguel Sa, venue manager of Lady Burra Brewhouse – which promotes itself as the only microbrewery in Adelaide’s CBD – says the thriving craft beer industry has led to increased public interest in the brewing process and requests for the Lady Burra restaurant to host private beer degustation events.

“It’s not just about matching the beer and food, but also understanding how we make the beer and the food … midway through the degustation we take them to the brewery and they can drink the beer while we explain how it gets made.” 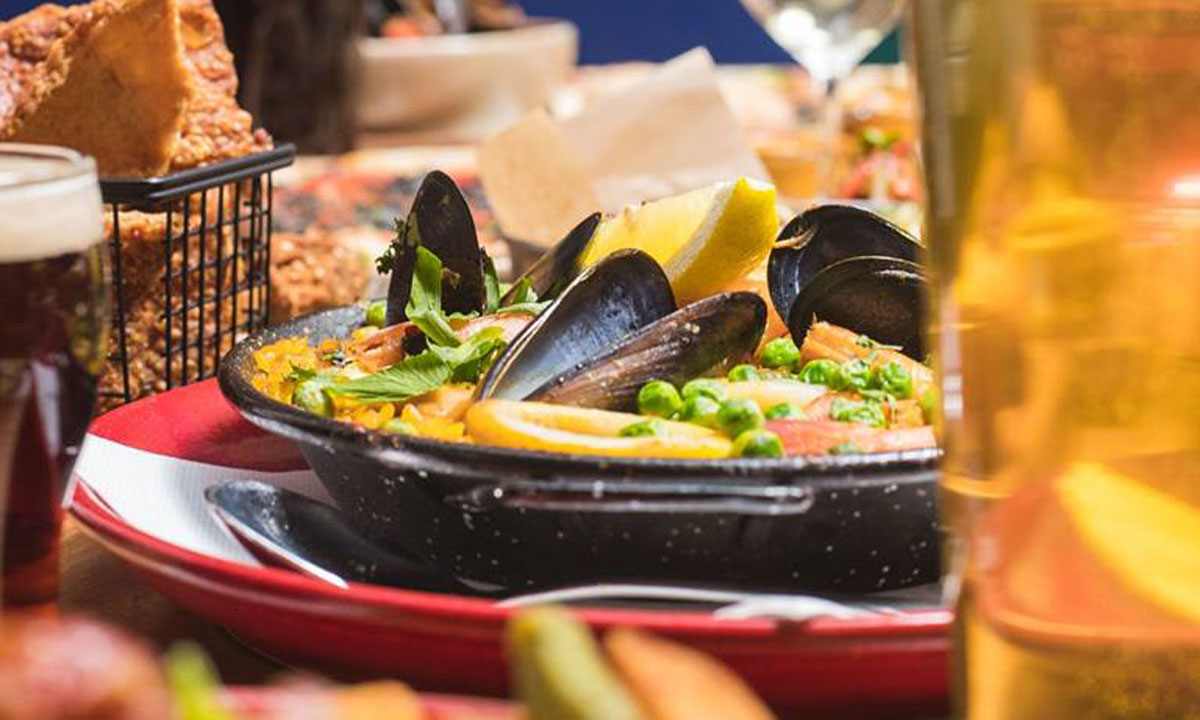 In addition to its four key beers – a Pilsner, Ale, Pale Ale and Irish Red Ale – the Lady Burra Brewhouse also makes seasonal and small-batch beers which are incorporated into the degustation dinners.

The restaurant serves a Portuguese-inspired menu, and Sa says examples of good matches include the Lady Burra Pilsner with the piri piri chicken (“the spiciness of the chicken pairs well with the pilsner, which is very clean and fresh”) and the Pale Ale with pork belly (“it has a fruitiness which cuts through the fattiness of the pig”).

Currently on tap at the Brewhouse is a Nitro Stout, with coffee and chocolate notes.

“Anything with dark chocolate or with fresh berries will complement well with it … things that are sweet but also have that bitterness,” Sa says.

“We always work on the flavour profile of the beer and how can we match it with the food without overtaking it.”

Lady Burra also incorporates beer into its food, especially sauces, marinades, syrups and batters. The spent grain from the brewing process is even mixed into bread dough to make focaccia.

Lisa Liebelt says the chefs Prancing Pony has worked with also use beer in their dishes: La Boca, for example, incorporated Sunshine Ale in a dressing for pickled squid, while the Amber Ale was used in a jus for a pork dish.

“We’ve even used some of the hops … we’ve infused oils with the same hops [that are in the beer] and used it as a dressing, for example on oven-baked wedges, and served it with the same beer.”

InDaily beer reviewer, home brewer and Royal Adelaide Beer and Cider Awards Committee member and judge John Krüger – who shares his own suggestions for matching a range of SA craft beers with food in this accompanying article – recommends that people wanting to host a beer degustation dinner at home ensure they get a diverse selection of beers.

“Going to a decent bottle shop is definitely the first place to start,” he advises.

“If you really want your degustation to be a success, try the beers first, don’t just assume that they’re going to work.

“We’re always told that Irish stout and oysters are the perfect match, but I actually prefer a crisp lager or even a tart sour beer.

“Riesling and oysters pair beautifully, so finding a beer with higher acidity like a tart wheat beer or a sour beer match well in the same way.”

And if you find your own attempts at beer and food matching at home leave you feeling overly full, it’s probably because you’re being too heavy-handed.

“At our beer degustations, we tend to work on about half a bottle per course,” Prancing Pony’s Liebelt says.