Walking into the Madonna Dei Martiri Molfetta Club in Albert Park, our noses are instantly hit with the homely smell of freshly chopped garlic, filtered coffee, and sweet Italian biscuits and cakes.

Inside, the clubroom has all the hallmarks of an Italian kitchen – a cluster of pasta machines sit next to bags of semolina and flour, boxes of eggplants await slicing and strips of fresh pasta dangle from the edges of tables.

What’s most impressive about the room, however, is the noise. Gather seven nonnas (and a couple of nonnos) together for a cooking session, and a ruckus of lively chatter and well-intentioned banter ensues.

“This is the 60th year of the Molfetta Club,” president Anna Farrugia tells me as she cracks eggs into a mixture of flour, semolina and chopped parsley.

“Our club is half religious and half social – we come to the club and hang out here and work to keep our culture alive.”

The port town of Molfetta in the south of Italy is known for its fishing industry, distinct dialect and the religious festival Madonna Dei Martiri. Like most Italian towns, Molfetta was caught up in the mass migration movement following World War II. Many of its residents migrated to Australia – Port Pirie and Port Adelaide, in particular – where the local communities valued the migrants’ fishing expertise.

Today, the Molfettese migrant community has dispersed into the broader Adelaide community, but its older generation is still committed to keeping the culture alive through community events and social get-togethers.

On the day I visit the Molfetta Club, a group of nonnas are preparing to host a 130-person dinner at the Unley Town Hall as part of a new pop-up restaurant and cooking workshop, The Travelling Table. The four-day event will provide the chance for grandmothers of three different migrant communities – Italy, Greece and Ukraine – to share their traditional cooking with the wider community.

Anna is tasked with making the pasta for u-tridd, a traditional Molfettese dish made using pasta and a broth of ossobuco and vegetables.

The spelling of the dish is unclear: “It’s dialect, there’s no correct spelling,” Anna tells me. The nonnas have decided to go with “u-tridd” for the menu; it’s a word they’ve always spoken, but very rarely written down.

Anna, like most of the Molfetta Club members, was born in Italy and immigrated to Australia with her family as a two-year-old in the early 1960s. Being the eldest child in the family, she was expected to help around the home, including in the kitchen, where her mother taught her the secrets of Molfettese cooking.

“In those days it was really tough for the immigrants, especially for the females,” she says.

“Mum couldn’t speak English. We started school still only speaking the dialect at home and we never went anywhere – we couldn’t afford to go out.

“For me, coming to the club now, and coming back to my roots, I guess really does help me keep in touch with my community.”

Fellow club member and nonna Rosa Paparella is helping Anna mix and knead the pasta dough. The daughter of Molfettese migrant parents, Rosa was born and grew up in Port Pirie, where she enjoyed a childhood of blended Italian and Australian culture.

“We used to have u-tridd every Saturday morning,” Rosa says. “My mum used to get up early and she used to make it, and by the time us kids used to get up it was dry enough for us to break the pasta up to put in the broth.” 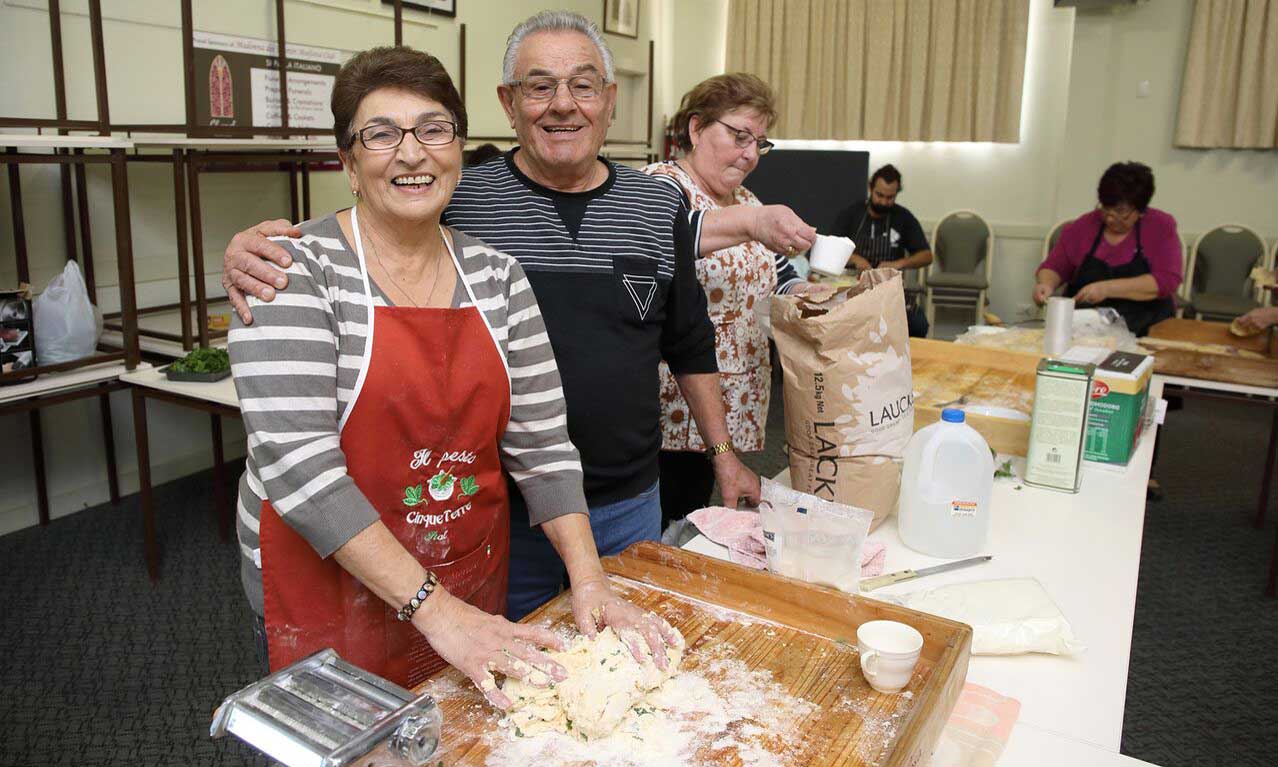 The club’s self-elected “supervisor” is Francesco Carrieri, nonno to six grandchildren, who enjoys the spoils of his wife Rita’s traditional cooking.

Across the room, Rita is serving almond cake to the nonnas in charge of the marinated capsicum, which the group will serve at The Travelling Table dinner as part of an antipasto entrée.

“Mum never used to write anything down,” Rita says, reflecting on her time spent in the kitchen with her mother.

“She always used to come in and say, ‘You did wrong’, and we used to always say, ‘But Mum, you didn’t tell me that’.”

A proud home-cook, Rita says she was surprised when she visited Molfetta as an adult to find that the Molfettese in Italy no longer make all their food from scratch.

“We do everything like our nonna do, traditional Christmas and Easter the same as Mum used to do it, but then we went to Molfetta and they’re not doing that anymore – they’re going to buy it at the shop.

“They still cook, but they’re going to buy – they don’t have the patience to do it.

“We’re doing more here than what they’re doing in Molfetta. If we don’t do it, the kids won’t learn to do that and the culture and the traditions won’t continue.” 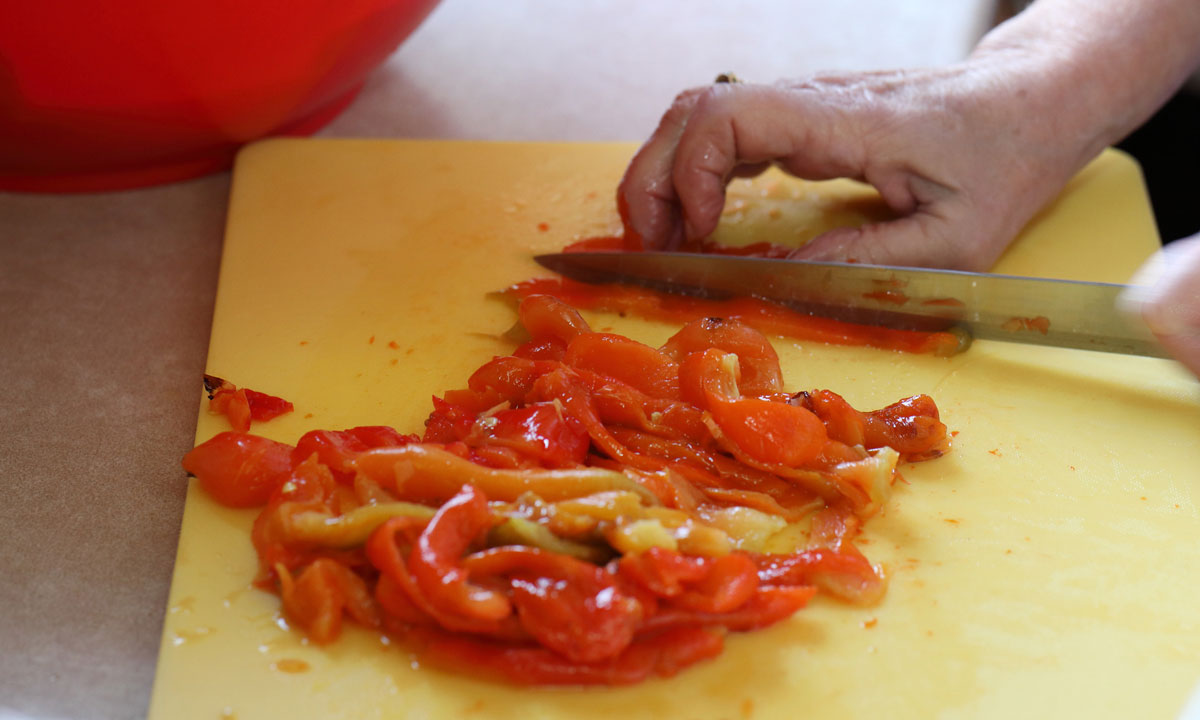 At the Greek Women’s Society of South Australia, yiayia Hellas Lucas is preparing to share her knowledge of traditional Greek food at The Travelling Table’s Greek night.

Like Italy, Greece faced economic hardship in the wake of World War II, prompting many Greeks to relocate to countries including Australia, where they set up their own businesses and community hubs.

When Hellas’ family arrived from Athens in 1956, they faced a “big culture shock”.

“When we arrived in Darwin it was very hot and humid,” Hellas says. “The airport consisted of a corrugated iron shed; no air-conditioning.

“We had no English, no language at the beginning; we just had sign language, basically.”

There was no recipe, no weights, it was just a handful of this or a little bit of that

Hellas says she didn’t start learning to cook until she got married. She would go to her mother’s house, where she was taught how to prepare food using the time-tested tricks of “feel, taste and how it looks”.

“The unfortunate thing is there was no recipe, no weights, it was just a handful of this or a little bit of that.

“It was a great time, though. I have great memories of cooking at home with Mum and arguing but also having a good time and laughing.”

At their Travelling Table event, the Greek yiayias will be serving a bean soup which is very popular, “especially in winter and during Lent”, along with dips, and a lemon and potato lamb casserole.

“There will be garlic, lemon and oregano, the staples of Greek cooking,” Hellas says.

“It’s food we have at home on a daily basis – it’s very tasty and very nutritious and I think it’s always good to experience different cultures and different cuisines.”

Ukrainian baba to six Irena Boujenko is also passionate about sharing her culture – especially its food – with the broader community.

“Ukrainian food is not that much known in Australia – it’s more Greek and Italian,” she says.

“We have different kinds of soup or broth with homemade noodles, lots of pickled vegetables, and dishes like borscht or varenyky, which is like dumplings made of dough and inside the filling is different – mashed potatoes with onion, sauerkraut, mushrooms, poppy seeds, things like this.”

Irena was taught to cook from an early age by her grandmother, who she says used what limited ingredients she had to cook “wonderful” meals.

“I always watched her and helped her because she was always so busy earning money to raise my brother and myself,” Irena says.

“I was probably not even 10 years old and I already knew how to cook so many dishes which quite experienced women wouldn’t know how to cook.”

After migrating to Australia with her husband and two daughters in 1992, Irena found it difficult to replicate the meals she made back home in Ukraine.

“It took me a while to find some of the ingredients in my cooking because there’s such a big difference in the shopping centres.

“It took me a while to find the right thickened cream and all the chocolate was different as well.”

For all the migrant grandmothers – nonnas, babas and yiayias alike– there is an overarching feeling that cooking is something they associate with their mothers, grandmothers and female relatives.

“It’s a way for the mothers and their daughters and grandmothers to sit at a table and just make their food and have a conversation, share things, talk about different things,” Irena says.

“Cooking can be a chore but there are definitely advantages for cooking together.”

The Travelling Table will host its first multicultural restaurant and cooking workshop event from June 7 to 10 at the Unley Town Hall. Organisers say they hope to expand the program to include other migrant groups for future events, but dates are yet to be set.