Tucked away at the end of West End laneway Gilbert Place, Hains & Co has become a popular venue for gin, rum and whisky lovers. It’s certainly not a place you’d associate with a cuppa, but this week cocktail hour and tea time converged when owner Marcus Motteram played host to Sri Lankan tea aficionado Dilhan C Fernando, CEO of the Dilmah Tea company founded by his father Merrill J Fernando 30 years ago.

“It just gives us different things to play with – it’s about being creative,” says Motteram, as he whips up a Negroni featuring vermouth steeped with a cardamom, orange and ginger tea infusion.

“The customers are always after a different experience.

“Obviously, one of the things that’s enormously popular at the moment is gin – now that’s just basically vodka with botanicals, the predominant one being juniper, but being able to add different tea flavourings to it is absolutely fantastic.”

Fernando – who drinks around 15 cups of tea a day (see his brewing tips below) –  is in Australia to celebrate the 30th anniversary of his family business. As part of the trip, he is working with a number of Australian food and drink identities – including Motteram, and chef and restaurateur Peter Kuruvita – to highlight different potential uses for tea as an ingredient.

Merrill J Fernando, now aged 88 and still actively involved in the Dilmah company, is credited with pioneering the concept of single-origin tea, and when he founded the business it sold just three teas: an “everyday” tea, English Breakfast and Earl Grey.

Today, it produces around 300 teas, but Dilhan says the business has faced “huge struggles” since the concept of an “everyday low price” strategy became widespread.

“Dilmah’s peak share was in 2008 or 2009, so just as the everyday low price, the discounting culture, came into Australia, we began to lose market share,” he tells InDaily.

“We have struggled to make money in Australia for 10 years … but at the moment we are seeing an enormous resurgence of interest in quality among Millennials and Centennials (Generation Z) who are looking at tea and saying, ‘It’s got wellness, it’s got variety, it’s got all of this’.”

Dilmah is frequently described in the media as an independent family business taking on the multinational giants of the industry. It still handpicks all its tea and uses traditional tea-making processes rather than modern technology.

Dilhan Fernando says that while this makes it tougher to turn a profit, it is helping to win over a younger generation of tea drinkers, who are more concerned with factors such as the origin of ingredients, the quality of a product and production methods.

“Obviously you can’t lose money forever but we are very optimistic that things are changing because the Millennials and the Centennials are driving change.

“As the Millennials are driving the quality back into tea, they are willing to pay more.” 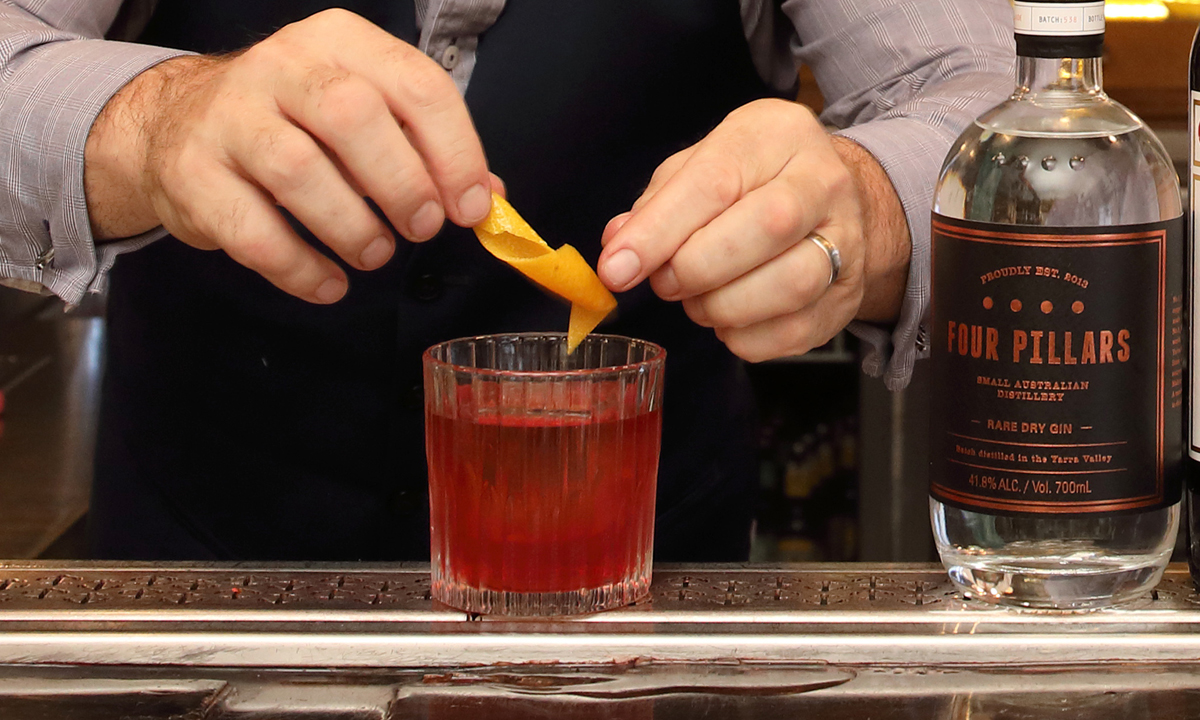 Fernando says fruit and herbal infusions are the fastest-growing sector in the tea industry globally, and Dilmah’s recent introduction of an infusion range (known as tisanes) is also part of a strategy to increase market share.

“They are a composition of tropical herbs and spices … Sri Lanka, back in the 1400s, was first invaded by the Portuguese for its spices, and even today, things like Ceylon cinnamon are very specific because it is completely different than the cinnamon or the cassia you get from other places. All of these spices have a functional element (for example, antioxidant properties) but also deliver on taste.”

Asked to come up with a couple of cocktails utilising the infusions, Marcus Motteram has stuck with the classics – including the Negroni (equal parts gin, Vermouth and Campari, with the Vermouth steeped in cardamom, orange and ginger tea for around an hour at room temperature).

“It’s just adding some other botanicals – it brightens it, it lightens it, it gives it more of some of those floral notes but it also adds some warmer flavours like the orange and cardamom. It’s really lovely,” Motteram says.

His second tea cocktail creation is a Pisco sour, made with Pisco (a South American spirit), lemon juice, egg white, and sugar syrup infused with peppermint and ginger tisane: “It adds some of those notes you don’t usually get – it’s mild but it’s interesting.”

Now that they’ve had the Fernando seal of approval, the cocktails will be available for a limited time on Hains & Co’s drinks menu.

“Most people, they might have good tea, but they fail to make it properly,” Fernando says.

“Brewing tea is about reversing what we do in the tea factory, so you need to be able to extract the flavour, the aroma, the freshness, the goodness – that’s the antioxidants – that are all put into the process through fermentation, rolling, and finally we fire the tea – that is like a baking process at around 90 degrees, where you take all the moisture out.”

As for milk, if you must have it (he doesn’t), Fernando says it is best added warm to avoid compromising the taste of the tea. And put it in after the tea – not before, as English tradition dictates.

“The source of that [putting the milk in the cup first] is one of the world’s greatest marketing campaigns, because after World War I, Staffordshire Pottery had a huge deficit of supplies … so they were having this problem where the porcelain ware was cracking.

“So they ran an ad campaign saying put the cold milk in first and then add your tea, and to this day, it doesn’t matter what I say, people still swear by it.”

InDaily will not be sending out a Forager email next Wednesday due to the ANZAC Day public holiday.