Fleurieu Distillery’s River’s End single malt whisky was awarded a Gold Medal, Best in Class and the Trophy, while its other entry, Atlantic Crossing, won a Silver Medal and was named Best in the International Smoked Whisky Category.

Run as the Steam Exchange Brewery for more than a decade, the wharf-side production facility was rebadged Fleurieu Distillery when brewer turned distiller Gareth Andrews released his first whisky in November 2016

The distillery was also awarded a Gold Medal in the Peated Whisky Class with its 61.2 per cent Bogart and Bacall at last month’s Australian Distilled Spirits Awards in Melbourne.

“Winning gold nationally and internationally in both peated and single malt categories is a great result for us and for our coastal region,” Andrews said.

“Fleurieu Distillery is uniquely production and tourism-based right in the heart of the Goolwa Wharf Precinct so when we gain recognition like this we are not only representing our business but also our community.”

The trophy-winning River’s End whisky is a unpeated single malt that gets its sweet and salty characteristics from the former Seppeltsfield port barrels it is matured in and the sea air blowing in from the Southern Ocean.

They are the seventh and eighth whiskies released in the Fleurieu Distillery’s 18-month history selling whisky with batches ranging in size from 200 bottles to 800 bottles per batch. 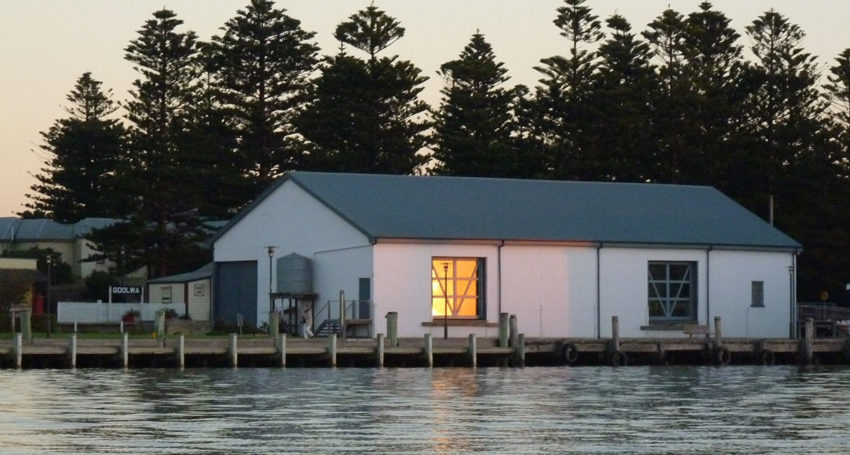 Fleurieu Distillery is right on the River Murray at the Goolwa Wharf.

“We’re doubling our output every year but effectively whatever we produce we’re not finding any difficulty in selling.

“It’s early days but we have been looking at several different export countries.”

Andrews said while it was always his dream to become a distiller, more than a decade as a commercial brewer and 28 national and international beer awards had provided a solid foundation for his whisky business.

“The beginnings of beer and whisky are very similar and there’s a very good chance I’m the first person to win a gold medal at the Australian beer awards and spirits awards,” he said.

“It’s not an overnight thing – you can make gin pretty fast but whisky takes time and patience.

“Whisky-making, for us. is all about the importance of quality, location and time.”

The American Distilling Institute Awards have been a happy hunting ground for South Australian craft producers.

Adelaide Hills Distillery took out the Trophy for Best International Gin at last year’s awards while this year it was awarded a Silver for its Bitter Orange Apertif The Italian and a Bronze for its 78 Degrees Gin.

Fleurieu Distillery’s award-winning whiskies and many other local craft spirits will be available at the Tasting Australia Spirits Awards Party in Adelaide on April 19.