Anna Thomas, operator of Treasury 1860 restaurant and bar on King William Street, is hardly a newcomer to the Fringe scene. She performed in The Vagina Monologues in 2009 and has been involved in a number of other shows.

This year, however, is the first time she has written and performed her own solo show – the cheekily titled How to Drink Like a Wine Wanker, which will be presented at the Treasury 1860 bar over 11 nights during February and March.

“I’m terrified!” Thomas admits of the prospect of the solo gig, which was inspired by a transformative year during which she went from being a “massive corporate sellout” to a venue owner and “the world’s most over-qualified barista”, discovering a passion for wine along the way.

“It’s a sometimes emotional but mostly silly show involving a fabulous selection of South Australian wine and 12 months of self-discovery.

“I have six beautiful wines and I use each as a milestone to tell a story about how the experience of discovering that wine is relevant to a particular moment in my life.”

Thomas says the three white and three red wines are all “quite unique styles” and audience members will have the option of buying wine flights to enjoy during the performance.

Treasury 1860 is one of numerous restaurants, bars, wineries and other venues hosting Fringe events with a food or drink theme.

The National Wine Centre is a new Fringe venue this year, operating a pop-up bar, The Glass House, on the terrace overlooking the Botanic Gardens, as well as hosting around 50 shows curated by Emma Knights.

Among them will be Wine … Because Kids!, where parents can enjoy an afternoon wine tasting while their kids are entertained with children’s shows, and the interactive Murder in the Wine Cellar, where guests are invited to come dressed in character and try to solve a murder mystery over dinner.

“This is the first year we have registered as an official Fringe venue, so it’s important that we get into the full swing of the festival season and offer something a little different for Fringe audiences,” says National Wine Centre general manager Adrian Emeny.

“The Glass House will be an outdoor oasis where Fringe ticket holders and visitors in general can come and have a drink under the stars.”

Another new Fringe venue this year is Feast Festival home Raj House, in Hyde Street, which will be transformed into “Rajopolis” for the duration of the festival and host a number of shows, including one by former Fringe weekly award winner Post Dining.

The creation of arts professional Stephanie Daughtry and dietician Hannah Rohrlach, Post Dining presents interactive eating experiences that include music and art, with a focus on sustainability issues and the frequent inclusion of edible bugs such as green ants and crickets.

Its Rajopolis event is called Post Dining Bite Sized – an intimate half-hour experience for just four people at a time who will sample three small courses of food paired with a film and sounds. 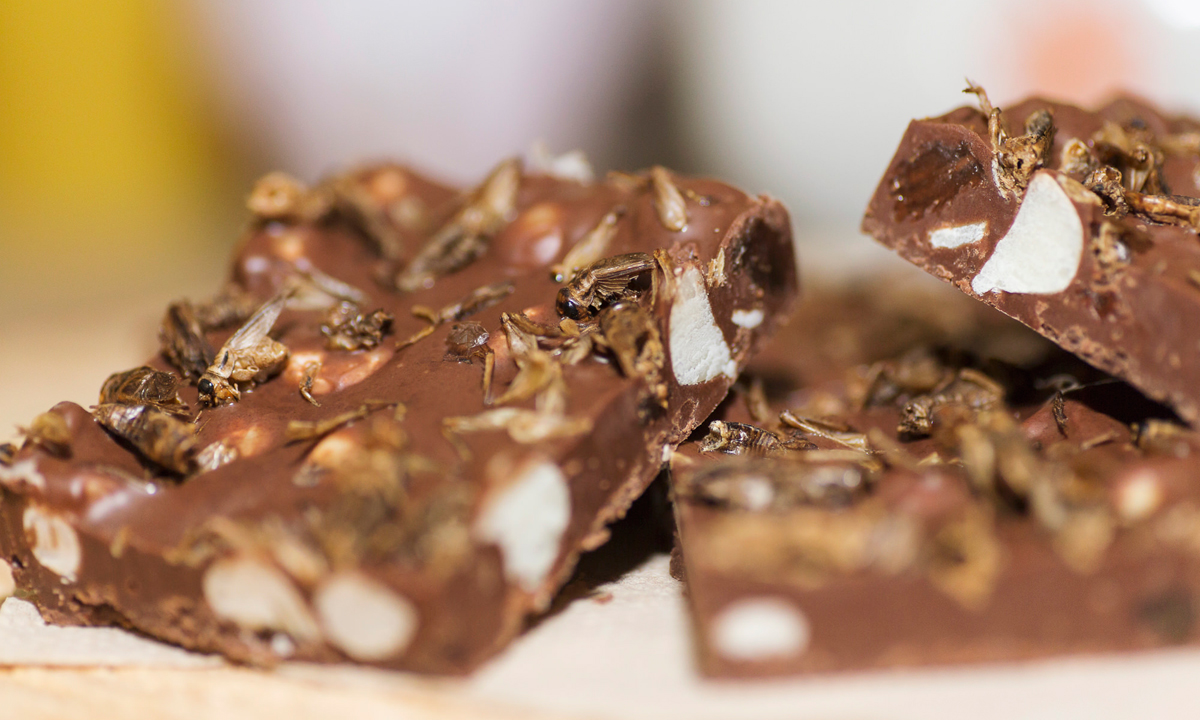 “We want people to have an immersive but an individual experience,” Rohrlach tells InDaily. “And because we’re matching food with film and music, we think it will work better in a smaller setting where there are less people for distraction.”

Bite Sized will explore the connection between people, food and the natural environment, with the courses themed around the earth, sun and sky.

“There will be savoury and sweet, but we do want to make sure people realise it’s not a full menu – more like a light supper,” says Rohrlach.

“People will get to try Australian native flavours in every course, and edible insects will make an appearance, as well as seasonal produce.”

The large outdoor Fringe hubs are once again wooing festival-goers not just with shows, but with an ever-expanding range of food stall and bars.

Gluttony, in Rymill Park, has more than doubled its food area this year, with Rowan Edwards (one of the founders of Udaberri) overseeing the space, which will includes stalls operated by Thai street-food restaurant Soi 38, Nepalese restaurant Gurkah’s, burger joint Gas Station, Filipino Project and Bowden artisan-cheese store Cheese-a-Holics.

“We’ve also escalated the wine and drink offering this year.”

There will be a cocktail bar serving classics such as negronis, espresso martinis, peated whisky sours and Aperol spritz, a Coopers beer bar, and a Rosemount wine bar where Felix Stoffell (sommelier at Mona Tasmania and a friend of Gluttony owner Daniel Michael) will present a special list of premium wines. 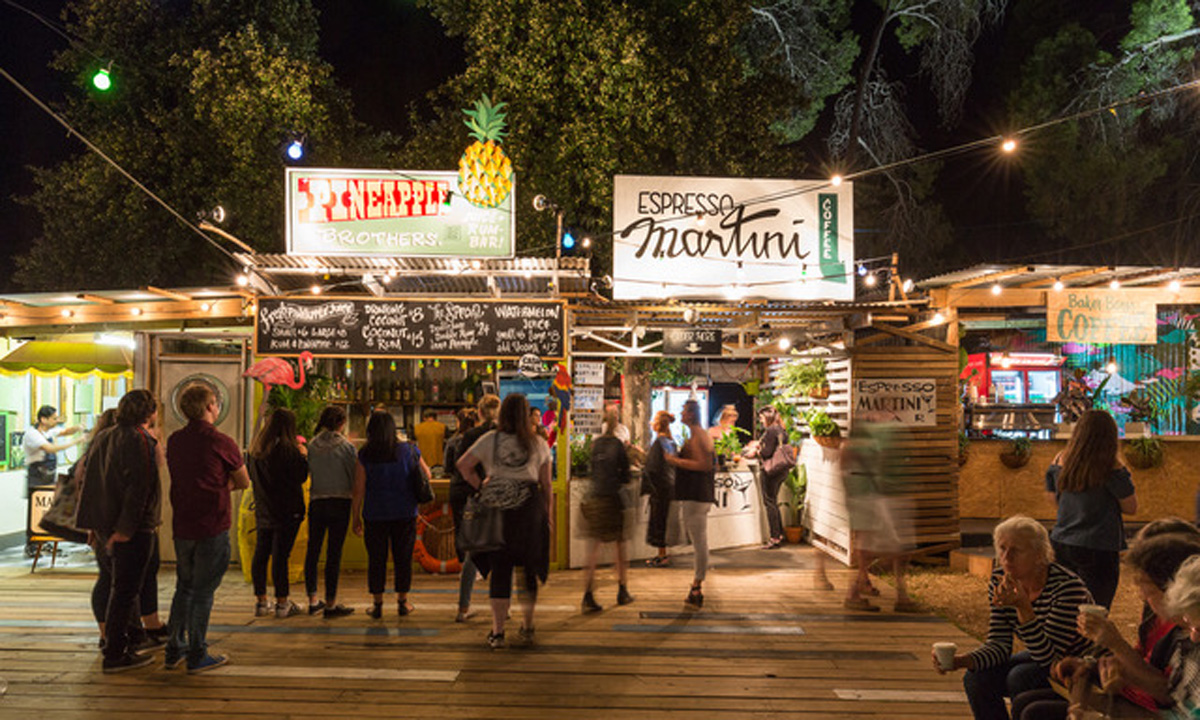 The Garden of Unearthly Delights will be home to around 30 food stalls and bars in Rundle Park, including carnivore favourite Pigs on Fire (which serves open-fire roasted delights from under a huge windmill) and cocktail bars Pineapple Brothers and Mary’s Mojitos.

Among the new offerings in the Garden this year are Gondola Gondola and Bia Om Bar, Paella Company, That Arancini Guy, MKR CAROClub and the Donut Diner cart. 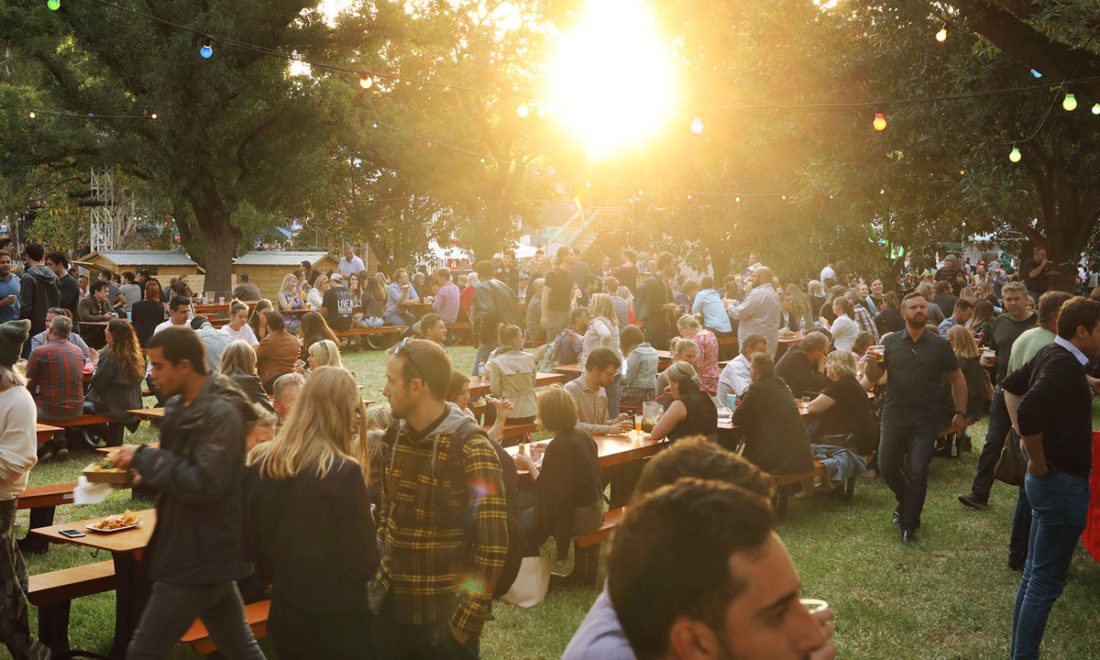 A new Adelaide food business launching at the RCC is Motherlode Nuggeteria, which is described by its operators as an “elevated fast-food concept” that gives “the ever-so-humble chicken nugget a makeover” (take a peek at what to expect here).

But it’s dessert bar 50sixone that will be wooing sweet-toothed Fringe-goers, with co-owner Simon Flocco saying its usual menu items will be given a “Fringe twist” for the RCC.

“Our kitchen have put together some epic creations,” he says. “Our home-made zeppole will be loaded with Insta worthy toppings that are normally reserved for our freak shakes.”

Think zeppole served with a scoop of Nutella ice cream, drizzled with melted Nutella and decorated with crushed hazelnuts and Kinder Bueno, or – and this may be a step too far for some – the “High School Sweetheart”, which features French fries served with  Belgian milk chocolate and house-made vanilla bean ice-cream.