The Tasting Australia Spirit Awards are part of a program of more than 140 TA events across 10 days (April 13-22) launched today, and will include categories for gin, whisky, vodka, rum, brandy and liqueurs.

TA ambassador Nick Stock will lead the expert judging panel and says the awards will be presented amid a large public tasting event in the Town Square festival hub in Victoria Square.

“It’s recognising the fact that instead of buying bottles of imported spirits and stocking famous brands that come from other countries and other hemispheres, our Australian spirits industry is now really vibrant – it’s exploded.

“Through Tasting Australia, we’re looking to provide a way that people who are working hard and kicking goals in that industry can be recognised and put in front of as wide an audience as we can bring.”

As well as giving festival-goers a taste of the wide range of spirits being produced around Australia, Stock says the awards will further understanding of what makes a quality spirit.

Following the awards event, distillers will also be participating in “bar takeovers”, where they will present signature offerings, speak to customers and pour drinks at various bars around the city.

“That’s about trying to share their presence and their wares as widely as we can,” Stock says.

“Adelaide’s got such a really healthy vibrant bar scene, we thought that rather than tuck it all into the Town Square we’d like to weave it into the fabric of the city as well.”

Stock says the panel will be looking for both the technical attributes of a well-distilled spirit, as well as the “interpretation of style” that produces a delicious drink.

“Distillation is a real art form and the equipment is like an instrument. That’s what’s really interesting about the craft distilling space – it’s an artist and an instrument working together…

“With these awards, it’s not necessarily the search for the perfect gin or the perfect whisky; because it’s such a flourishing and new and kind of embryonic space, it’s more about teasing out as many good and interesting examples as we can find.” 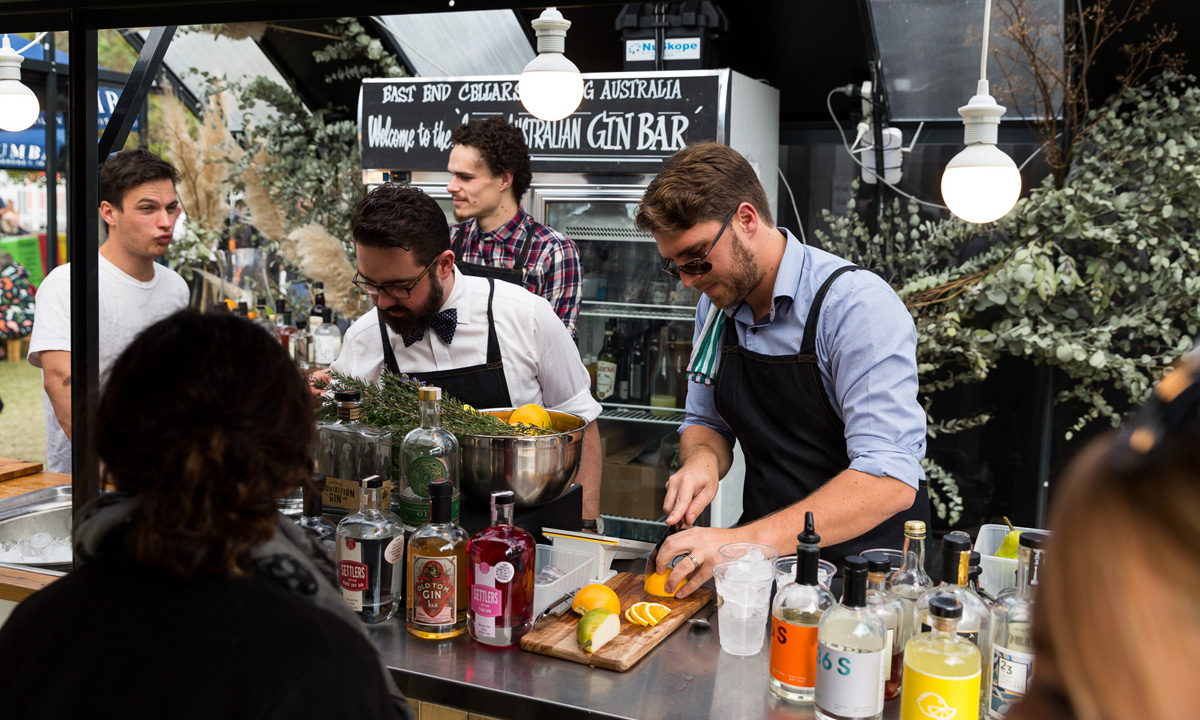 A gin bar in the Town Square at last year’s Tasting Australia.

Stock says the boom in craft distilling comes off the back of a global drinks trend towards rediscovering the world of the cocktail and the cocktail bar.

“What would seem to be an historic, old-fashioned classical space that really Australia hadn’t done a great job of embracing has well and truly changed … that cocktail bar fashion has sort of fanned the flames of distilling.”

The festival will open with a Surrealist Ball at the new d’Arenberg’s Cube in McLaren Vale, and close with the sold-out Fresh Wine Disco at The Manor at Basket Range.

Guest chefs will include Rodolfo Guzman of Boragó in Chile, Christian Puglisi of Relæ in Copenhagen, Mehmet Gürs of Mikla in Turkey, Carlo Mirarchi of Blanca in New York, and Christian and Manuel Costardi of Ristorante Christian e Manuel in Italy.