Café Outside the Square opened just over a week ago in the space which was occupied by Bar 9 until it closed in April after just over a year of operation.

By day it operates as a café, serving breakfast and lunch, and in the evenings it is used as the dining area for those staying at the adjacent Vinnies Men’s Crisis Centre.

“I’d been thinking for a few years about a kind of community cafe idea,” says Adelaide entrepreneur Mike Chalmers, who has established Café Outside the Square with business partner and fellow philanthropist Tim Seymour-Smith.

“Then serendipity kicked in because this opportunity turned up and I already had a relationship with Vinnies.”

Chalmers, who has previously volunteered at a St Vincent de Paul Society soup kitchen and op shop, as well as participating in its annual CEO Sleepout, says the café provides a rental stream for the organisation (which owns the space), as well as offering pay-it-forward meals and hospitality training for people who are homeless.

It is managed by Mark Potter, who previously owned Blessed Cheese at McLaren Vale and Three Monkeys at Willunga.

The café has been given a new look, with a fresh paint job, new lighting, sliding doors and work by local emerging artists brightening the walls.

The aim, says Chalmers, was for a space that welcomes everyone and is “not too hip or too funky”. In addition to seating for up to around 80 customers, there is also a co-working space at the rear of the café.

To keep costs down, Café Outside the Square offers a simple menu of mainly cabinet-style food such as paninis, pastries, wraps, arancini balls and sweets.

It also serves a cooked breakfast on weekends, a daily soup, and a “square meal of the day”. The square meal is the same hot dish served the previous night to those eating in the Vinnies’ dining room and might be something like a lasagne or curry.

Lamb curry was one of last week’s Square Meals.

“Every time that someone buys that meal, we pay for two meals for the homeless men at night, so there’s a lovely sort of pay-it-forward philosophy to what we’re doing,” Chalmers says.

“The support we get from our customers directly helps them.

“But we’re also really aware that we need to run a cafe that stands on its own feet and that is a successful café, because regardless of the community aspect, people won’t come if the coffee’s not good and the food’s not good and the service is not good.

“The best way we can be charitable is to become profitable and then have that money available to invest [back into the operation] … people are really buying into the ethos, but at the same time if people just want to come because they like our café, that’s fine too.” 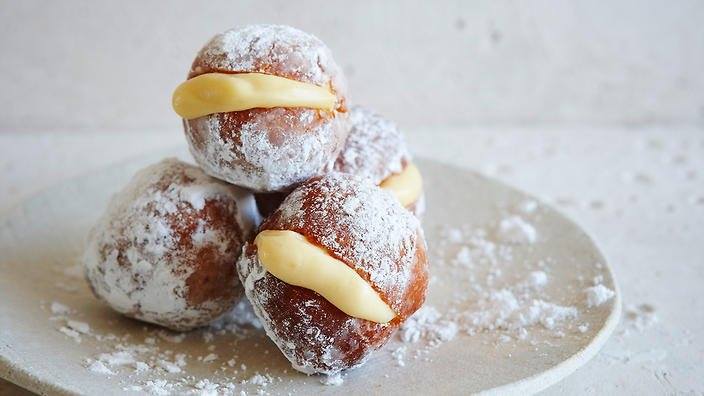 A sweet temptation at Cafe Outside the Square.

Café Outside the Square has already been working with its first homeless trainee – a young man who has been learning hospitality skills while working as a waiter, barista and kitchen hand.

It plans to create a training program that will help not just Vinnies’ clients but a broader reach of disadvantaged and long-term unemployed people.

“It’s also an opportunity to build self-esteem and confidence, because obviously these people have been having a hard time of it,” Chalmers says.

Ultimately, he and Seymour-Smith also hope to be able to provide mentorship for the trainees and help them to find employment either at the café or elsewhere.

“We’ve already had a hell of a lot of support… a lot of people like the fact that it’s meaningful and it’s doing something to help people.

“It’s attracted a lot of generosity and goodwill.”