The pale ale style has evolved differently in each country. The most recent Brewers Association Style Guidelines (used for beer judging) list English, American, Australian, Belgian and International styles of pale ale, each with their own distinct twist.

English pale ales are light and easy to drink, with the use of herbal-tasting traditional hops, whereas the Americans like to power up the hop schedule and take the beer to another level. Australia is somewhere in the middle; it’s mostly closer to the English restrained version, but we use our own varieties of hops, predominately Pride of Ringwood, which has a pine resin flavour and aroma rather than the American fruit salad.

A classic Australian version that’s been copied from time to time, but nothing has ever come close to this South Australian icon.

It’s bottle-conditioned but can be poured carefully without the yeast for a clearer, cleaner version. Otherwise, most modern South Aussie bar staff will enthusiastically roll your unopened bottle along the bar before decanting.

The beer has a persistent white head and aromas of bread yeast, dusty grain and a hint of woody piney hops. As with all beers, the fresher the better. An extremely fresh Coopers Pale Ale still has a hint of sweetness and stronger, fresher hop aroma and flavour.

The flavour is dominated by the bready dusty yeast which always reminds me of a wheat beer yeast. Don’t believe me? Try a piece of quality 70 per cent dark chocolate with this beer and you’re transported to the German Club in seconds.

The dry finish and high carbonation make this beer very easy to match with food. It’s 4.5% abv (alcohol by volume) in 375ml stubbies, longnecks and draught.

Food match: Pan-fried King George whiting fillets with hand-cut chips. The subtle sweetness of the delicate fish isn’t overpowered by the beer. A big feed of blue swimmer crabs has a seafood salty/sweetness that also complements the beer perfectly.

Prancing Pony is really kicking its beers up a notch, possibly because of its new brewhouse. The Adelaide Hills are proving to be the craft beer destination of South Australia.

This is a fairly clear beer for an unfiltered, bottle-conditioned ale. It has a deep orange hue with a honey toast and spicy aroma. The taste is quite spicy with a complex sweet honey background including citrus and thyme.

The Prancing Pony has quite a nice body for a pale ale. Thicker, sweeter and more mouth-filling than most, but still with a fairly dry, satisfying finish. There’s a really enjoyable aftertaste of spiced honey and resiny bitterness.

The citrus and assertive hops push this into the American style but it’s not over-the-top. With a clean pour, leaving most of the yeast residue in the bottle, this pale ale lets the malt and hops shine. It’s 5.5% abv in 330ml stubbies.

Food match: Barossa Cheese Co Baby Bert, baked and then drizzled with blue gum honey and a light sprinkle of Murray River pink salt flakes. The sweet and spice of the beer matched with the honey and the nutty cheese takes it to the next level.

Dan Wright, a surfer from McLaren Vale, is the man behind Swell. His stated motivation for starting a brewing career reminds me of the surf-loving brewers from Stone & Wood in Byron Bay: after a big session of surfing, they want a refreshing beer that has bright, approachable hop flavour and aroma. Nothing too heavy and offensive.

Swell has delivered nicely. Its pale ale punches out some big fruity hop aromas and a hint of biscuit to start. There’s the nice broad yet subtle fruity flavour of hops and a hint of yeast in a refreshing lighter malt body.

A surprising little poke of bitterness at the end reminds the drinker that another would be nice.

Food match: A random selection of beachside fish and chip shop treats. Make sure there’s at least one Chiko Roll, but most importantly, some quality battered fish. This lighter-bodied beer with a refreshing hop approach matches well with warm seafood, hot chips, a squeeze of fresh lemon and anything with an extra hit of salt (if you haven’t already had your face in the sea recently).

Having been at the start of the Melbourne craft beer scene starting back in 1997, the Mountain Goat guys have been consistent in leading the way with hoppy yet approachable beers. Their pale ale is no different, with a big persistent white head, slightly hazy bright orange hue and big aromas of musk lollies which give way to citrus peel.

The mouthfeel is slightly rich and chewy, with plenty of malt mouthfeel without being too sweet. This is another American-style pale ale with US hops at the forefront. Carbonation is quite soft, so the subtle sweetness is allowed to stand out. It’s also soft enough to drink from the 330ml boutique stubby.

At 5.2% abv or 1.4 standard drinks, this beer could definitely sneak up on you. It also has a wonderful grapefruit and tangerine soft bitter aftertaste.

Food match: Try this quality pale ale with a prawn and mango curry. Sweet potato and mango perfectly match the sweet and bitter citrus of the beer.

The local Pirate Life crew have delivered what the craft beer fans have been asking for all along: abundantly hopped beers that are finished perfectly. Their beers are filtered, clean and balanced, with hop qualities that are very bright and aromatic.

This is a very popular and modern interpretation of an American-style pale ale, utilising Cascade and Mosaic hops. The beer pours with a dense creamy head above a crystal-clear, dark orange ale.

The aromas are complex and huge – citrus and spicy hops along with some slightly grainy sweet malt, but adding to the complexity is also a character of the Mosaic hops that reminds me of fresh tomato leaves (rub some between your fingers while you try this beer). This adds green leafy aromas and flavours.

The bitterness is sharper and slightly more aggressive while still remaining balanced and totally enjoyable. It’s 5.4% abv in 355ml cans.

Food match: Slow-cooked American-style barbecue ribs. If buying the barbecue sauce for the glaze, make sure it’s a good one. The sweetness of the chewy glaze will complement the bitterness of this complex and delicious pale ale. 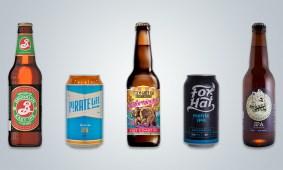 Top of the hops: IPAs

John Krüger is an Adelaide-based photographer and home brewer with a passion for good beer. He’s on the Royal Adelaide Beer and Cider Awards committee, as well as being a beer judge with the awards. Read more beer reviews here.