India Pale Ale may have been the beer style of choice to handle the extremes of the long ocean voyage from the UK to India in the old days, but it’s now the beer of choice for many modern hardcore beer fans around the world.

It’s the heavy metal of the beer world and the volume is definitely turned up to 11. High hop rates added at almost every stage of the brewing process result in huge hop aromas and very high accentuated bitterness.

India Pale Ale is the kind of beer you can still taste the following day.

The high bitterness has to be balanced with a bigger malt sweetness and body to keep the beer in balance. This also results in higher-alcohol beers that tend to be immensely satisfying sippers rather than session beers.

It’s a style that can be enjoyed all year round, and food-matching requires bigger flavours that don’t get swamped by the brutal hop onslaught. Put on your best black leather skin-tight pants for these babies!

This pours cloudy with yeast residue, including small pieces of hop debris. It has a big persistent head, with big hop and malt aromas. Smells of sweet honey and woody spices but doesn’t taste overly sweet.

The Pirate Life pours clean and clear. Filtered and conditioned in the brewery, it has a deep orange hue and a nice big puffy aromatic head. An extremely fine-tuned IPA which smells of orange peel and spice.

Soft, smooth malt gives way to a broad yet firm bitterness with flavours of bitter orange, tropical fruits and a nice thick honey for the finish. At 6.8% abv in a 355ml can, it’s a big hoppy beer, but so well-executed it wouldn’t be too hard to knock off quite a few.

Food match: Orange and pepper-crusted duck breast to accentuate the bitter orange. For the vegetarians, flourless orange and poppyseed cake with a drizzle of orange blossom honey. For a beer snack, toasted white bread with unsalted butter, bitter orange marmalade and a few fresh thyme leaves.

Showing some haze with a big clingy head, the Brooklyn is a soft, comfortable IPA – even at 6.9% abv 355ml – with a nice stonefruit and apricot hop aftertaste. It’s one of the original east coast craft IPAs from the United States. (The book Beer School is a great read for anyone interested in the brewery).

A very enjoyable imported beer. Although nowhere near as fresh and bright as the local options, it still ticks all the boxes of big fruit flavours, big smooth bitterness and a thick fruity background.

Food match: Barbecue cherry-glazed pork ribs or apricot-glazed lamb rack. Drink at least one of these while you stand around the barbie.

The Big Shed crew goes big with a beer that features two brown bears having a cuddle on the label. The Californicator is a bright, clear beer with a deep, woody, red colour.

It’s big at two standard drinks – 7.5% abv in a tiny 330ml bottle which is carbonated softly enough to drink from. A guilty pleasure, but so good. If you like your glassware, Californicator has a persistent head with tropical fruits on the tongue and cheap-bread white toast. A very dangerous beer in terms of drinkability versus alcohol.

Food match: Combo spicy bánh mì with all the extras, including coriander, and twice the crazy tiny chillies. Don’t fight it, just go with it.

A big, ballsy, 7% abv 375ml can of syrupy bitter beer. It pours hazy, probably due to the very high hop rate. The ale is deep golden orange and has bucketloads of hops giving off tropical fruity and pineapple aromas along with resinous pine.

While it’s quite a big beer, after a few sips it becomes moreish, even though the international bitterness units (IBUs) clock up at an impressive 80. There’s a good balance of sweet malt and bitter tropical hops and, thankfully, the carbonation is restrained enough to make this beer perfect straight from the can. It’s ideal for good outdoor festivals where beer aficionados can drink quality over quantity. 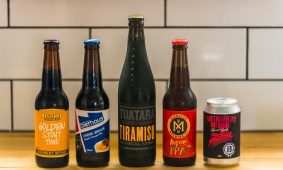 Smoky beer, cocktail ale and a brew that tastes like tiramisu

Food match: Haddo’s Hotdogs “The Original” – a smoky pork wiener and jalapeños bounce spicy and salty off this sweet and bitter beer.

John Krüger is an Adelaide-based photographer and home brewer with a passion for good beer. He’s on the Royal Adelaide Beer and Cider Awards committee and also a beer judge with the awards.