The subtropical grapefruit tree is known for its large, yellow-skinned citrus fruit and is believed to have originated from Barbados, where they developed as a cross between citrus trees of Asian origins.

Grapefruit trees are well suited to the South Australian climate but as the fruit develops best in warmer regions, local commercial growers tend to be located in the Riverland or Murraylands areas.

Grapefruit come in many varieties with colours ranging from yellow (known as “white”) to pink and red. The flesh varies from sour to semi-sweet and is packed with vitamin C and anti-oxidants.

Pink grapefruit have a thicker rind than the more common white varieties, but are sweeter and less bitter in flavour.

Grapefruit are tree-ripened and, unlike some fruit, do not ripen further after picking.

DJ Garden Fresh Citrus has a number of 15-year-old pink grapefruit trees on its citrus farm at Nildottie on the Murray River. Dave Schulz, who runs DJ’s, says grapefruit are usually picked from June to August with the more tangy fruit picked early and those left longer on the tree having less bitterness. However, grapefruit can be left to hang on the tree for many months after they first ripen as they keep their flavour well.

Schulz likes to serve the sweeter pink grapefruit in salads or simply cut in half with honey on the top.

Fat Goose Fruits also sells grapefruit and other citrus at its stall at the Willunga Farmers’ Market on Saturdays from 8am to 12.30pm.

DJ Garden Fresh Citrus also has a stall on Saturday mornings at the new Gawler Farmers’ Market on Saturdays from 8am to noon at the Gawler Visitor Information Centre, 2 Lyndoch Road, Gawler.

Lyndall Vandenberg, marketing and communications coordinator for the Willunga Farmers’ Market, has shared her recipe for Chicken Baked in a Pink Grapefruit Marinade.

“Pink grapefruit are low in acid and yield a wonderfully sweet and aromatic flavour when slowly cooked,” she says. “The make a perfect flavour match for roast chicken with this combination of spices and herbs.” 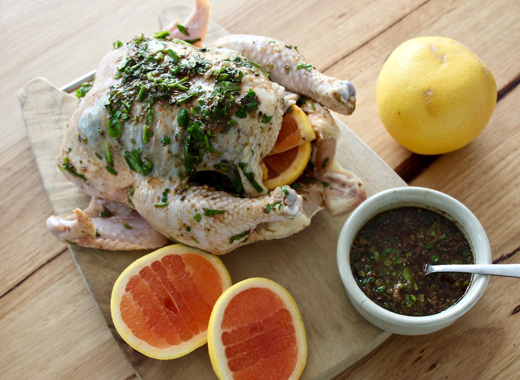 Preparing a chicken for baking with pink grapefruit marinade.

In a large bowl, combine all ingredients for the marinade, along with a few generous pinches of salt and pepper. Next, spread some of the marinade into the cavity of the chicken and between the skin and breast, rubbing the remainder over the skin. Place the chicken into a baking tray, cover and refrigerate for a few hours.

Heat the oven to 180C (fan-forced) then bake the chicken for about 1 ½ hours. To test if it is done, pull the leg away from the body. The flesh should not be pink and the juices should be clear. Allow the cooked chicken to rest for at least 10 minutes before carving.

Spoon over juices before serving with baked potatoes and a fresh salad.