Established three years ago in the Adelaide Hills, the award-winning brewery produces a range of craft beers at its purpose-built brewery and tasting shed near Mt Barker.

They share their story here as part of a series profiling wineries participating in the 2016 Cellar Door Festival this month.

“We do small-batch craft brewing and use incredible amounts of late hopping for hop flavour and late, smooth and lingering bitterness without a sting. This is why we stubbornly refuse to filter our beer, to retain all those flavours we spent so much time producing in the first place.

“We believe beer should have character and should be made from traditional beer raw ingredients – malted grain, hops, yeast and water.

“Just like wine, craft beer will take you on a flavour journey. Swirl your beer in the glass and inhale the delicious aromas of a variety of hops; sip and savour the perfect balance of malted grains and hops to truly understand what craft beer is all about.” 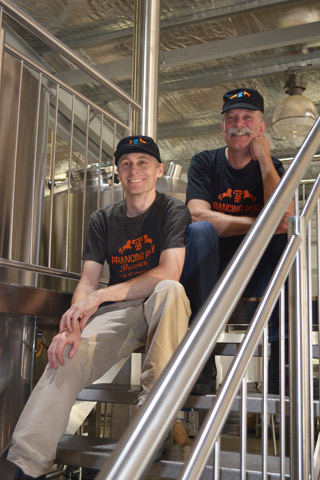 What we do best …

“The philosophy of our head brewer is that craft beers should have long flavours, like a story you think is finished but carries on, or like an intricate painting – the longer you look at it, the more you discover.

“After three short years, our 100-litre fire-operated brewing equipment has been put to rest because we simply could not keep up with demand. After a visit to Germany, our head brewer, together with German engineers, developed a new state-of-the-art system that allows us to maintain the ability to brew traditional beers using traditional brewing methods in greater volume while maintaining the long lingering flavours our beers are known for.

“The new brewing equipment is installed and is already turning out our much-loved long flavour beers.”

What our place means to us …

“All our ingredients are sourced locally, where possible, and we choose to reduce, re-use and recycle wherever we can. The donkey on our farm is truly grateful for all the spent grain when we’ve finished with it.”

What we will bring to the Cellar Door Fest …

“We will be bringing our two new summer-style beers: the Sunshine Ale and the Hopwork Orange APA.

“Sunshine Ale (4.8 per cent) is a refreshing and thirst-quenching summer ale made from 100 per cent Pilsner malt and hopped six times with only Citra hop, producing lychee, mango, pineapple, orange and melon characters. It’s straw-coloured, with light malt sweetness, moderate bitterness with a citrus kick and dry finish.

“The Hopworks (4.8 per cent) has a big nose of orange, then a clean crisp opening, a preciously delicate layer of malt, followed by tropical fruit, tangerine, hints of honey melon, mango and pine needles. The hop bitterness rises steadily, pulling us out from that fruit madness, and lingers smoothly.”

Why we take part …

“We have always enjoyed fabulous support from our local community, but we see Cellar Door Fest as a great opportunity to showcase our craft beer to a wider community that may be new to the delights of craft beer.

The Prancing Pony team will join 180 other South Australian food and wine producers at the 2016 Cellar Door Fest from February 26 to 28 at the Adelaide Convention Centre, where they will have some of their craft beers available for tasting and purchase.