The new hive is part of a sponsorship deal with the Adelaide Bee Sanctuary, an organisation aiming to promote natural beekeeping practices. 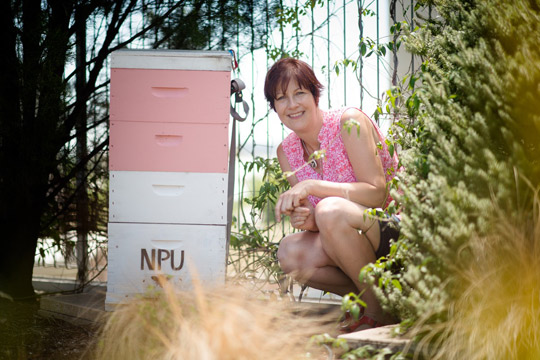 Adelaide Bee Sanctuary offers sponsorship of rescued honeybees and provides all maintenance, insurance and care. In return for housing the bees, sponsors receive an annual portion of honey.

Ullrich says the urban environment is perfect for beekeeping.

“Only having one source of diet – if they were in a canola field, for example – isn’t good for the wellbeing of any animal. The urban environment is also lot less extreme than out in the bush.”

The InterContinental installed one hive on its rooftop in December. This houses bees rescued from a restaurant balcony in nearby Waymouth Street.

The hive is expected to produce about 60 kilograms of honey per year, eight kilograms of which will be given back to the InterContinental. The remaining honey will be redistributed to other sponsors, to compensate for poor nectar flows in other hives. 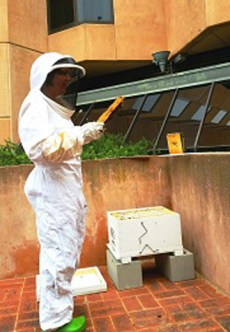 One of the InterContinental chefs attends to the rooftop hive. Photo: supplied

“He was talking about how fantastic his garden was after he put the beehives in.

“The bees were very docile – Simon is anaphylactic but he was fine around the bees. He was talking about how he gets raw honey – honey that’s unheated and untreated. You end up with a great product.”

Bryant says becoming an ambassador was a “no-brainer” because bees are so integral to the food supply industry.

“If we have no bees, there’s no pollination, and no food.

“I try to keep the honey in its most natural state. Using it in an ice-cream instead of heating it for custard, or drizzling it over a Greek cake.”

Hart says InterContinental Adelaide plans to use the honey for the hotel’s breakfast buffet to accompany granola and Bircher muesli.

The honey will also be featured in monthly menus with other local and seasonal produce.

“We will use some of the honey for a honey and nougat tartufo. It’s like an ice-cream, and will contain the honey, almonds, peanuts, coconut, nougat and milk chocolate,” Hart says.

There are also plans to provide a small jar of honey in each guest room as a welcome gift.

Hart says he is looking forward to receiving his first batch of honey, due in summer next year.

“We have our herb garden on the rooftop terrace, so hopefully the bees will congregate around there, and go to the nearby jacaranda trees so we can get rosemary and jacaranda-flavoured honey,” he says.

Since it first started operating in 2013, the Adelaide Bee Sanctuary has grown in size.

The Adelaide Zoo, Government House, Christie Walk and Adelaide Showground are just some of the organisations that have become sponsors, along with community gardens and private gardens.

Ullrich says the Adelaide Bee Sanctuary is now on the lookout for more chefs to become sponsors.

“I have a number of beehives in the hills that are not coping with the decrease in nectar supply this season and during previous seasons, so getting these hives into the urban environment would be great,” she says.

Installing a beehive with the Adelaide Bee Sanctuary costs $650, which includes the cost of the beehive and bees.