Ray seems to fry everything (including her vocal chords), and on this day she was constructing what she called a “Man Food” burger.

She built a ginormous meat patty out of pork and beef, then added a “handful” of grated pecorino. It clearly wasn’t rich enough for her, because she then melted another slice of cheese (provolone – sliced “not too thin”) on top. Then, she roasted slices of salami in the oven, before garnishing the heaving, glistening patty with these crispy slices of pig. (On the Food Network’s website, Ray’s “salami burger” recipe is followed by a Godzilla-like concoction called “fried croissant doughnuts”).

This is the kind of cooking that led hard-boiled celebrity chef Anthony Bourdain to remark of Ray: “She’s hugely influential, particularly with children. And she’s endorsing Dunkin’ Donuts. It’s like endorsing crack for kids.”

That was back in 2007. Today, Bourdain is shoulder-to-shoulder with Ray on the Food Network – repurposed in Australia by SBS with extra little Australian nuggets.

But no amount of Bourdain, Luke Nguyen, Maeve O’Meara or even expat Curtis Stone can make up for the river of gloop being mainlined by SBS through our TV arteries.

Take the nightly prime-time show Chopped – a kind of cut-down Masterchef for professionals, where four chefs compete to create a dish from three consecutive “mystery” baskets (after each round, one chef is “chopped”).

After a few shows, though, some unsettling trends emerge.

The first disturbing feature is that many of the contestants are overweight, some of them obese – which isn’t surprising, given the dishes they serve up.

The ingredients they are asked to cook with are usually grotesque, either individually or in combination. On one recent episode, the chefs were asked to create an “appetiser” out of Mississippi mud pie, brie cheese, Italian maraschino cherries and potato crisps. Mmmm.

No wonder the go-to dish seems to be the “croquette” – in other words, moosh all the weirdness together, “bread” it and deep fry.

You slowly realise that the show has zero respect for classical dishes, techniques or ingredients. This is the television version of a food fight, with all the waste and horror that a true food lover feels at seeing edibles strewn about the place.

But it doesn’t stop there. In fact, Chopped, is one of the classier Food Network shows.

Diners, Drive-ins and Dives is a show which celebrates the food that has made the United States the heart disease centre of the universe.

More people die of heart disease in the US of A than all cancers put together, and “Triple D” shows in graphic form why this so.

Gravel-voiced, peroxided host Guy Fieri tours American greasy spoons, fist-bumping chefs who typically add celery salt and powdered garlic by the handful to quivering mountains of pork fat and cheese, before rolling whatever it is in breadcrumbs and deep frying. Shiny-lipped customers are shown talking in thick-voiced rhapsodies over these chunky conglomerations.

In one episode aired in Australia recently, Fieri praised a “meat lovers” pizza which was piled with Italian sausage, pepperoni, bacon, and – the coup de grace – a thick layer of Canadian “smoked meat”.

The joint now calls this its “Triple D” pizza (diabetes, dehydration and death?).

Triple D isn’t pushed away in a dark corner of the Food Network’s menu – it’s prime-time, prime rib for the Saturated Broadcasting Service.

Don’t even get me started on the Holiday Baking Championship (below) in which a selection of mostly overweight contestants bake obscene amounts of fat-coated sugary treats for a panel of judges, two of whom are in less-than-ideal shape (the third is an English woman who should get back across the Atlantic as soon as possible). 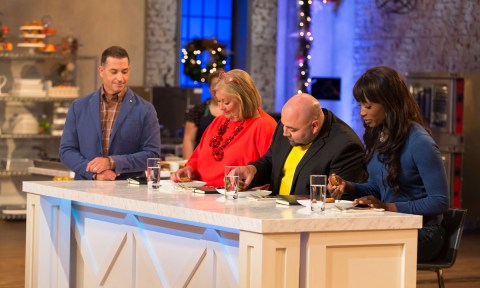 The Australian Bureau of Statistics recently released the results of its 2014-15 National Health Survey – and it’s terrifying.

In South Australia alone, more than 840,000 people identified as overweight or obese.

More than 1.2 million of us reported eating fewer fruit and vegetables than recommended.

More than 200,000 of us said we suffered from hypertension.

As InDaily reported last year, South Australia is suffering an epidemic of type 2 diabetes which threatens to overwhelm our health system.

It is exactly the worst time to be launching a food channel devoted to the kinds of dishes that are killing us.

There’s plenty of great food programming out there which focuses on tasty, healthy or traditional dishes (even all three).

It’s a shame SBS chose to axe a perfectly wonderful food magazine, Feast, to sink its dough into the Food Network.