Along with the Stobie pole, the Hills Hoist and the Stump Jump Plough, the “goon sack” – or cardboard wine cask – is another brainchild of South Australia and this year marks 50 years since its inception.

Back in 1965, Riverland winemaker Tom Angove was mulling over an alternative to the half-gallon flagon (“goon”), the 2.25-litre glass bottle that was a standard receptacle for table wine at the time, and came up with the bag-in-the-box concept.

“The flagon was a heavy, ungainly and difficult-to-dispose-of unit,” says his son, John, who was then 18 years old and sceptical of his father’s idea.

“He was also very keen to get a gallon of wine (approximately 4.5 litres) to the consumer as cheaply as possible.”

Tom Angove always referred to the packaging design as either a “soft pack” or a “bag in box”. The word “cask” had not yet been coined – and he was opposed to the use of that word, as a cask was a large wooden barrel used for the maturation of wine.

“I remember well Dad bringing home a prototype of his new idea. He was very determined, seeing only the brilliance of the ‘airless flow’ concept and was not to be side-tracked,” says John.

“I think the flexible pack idea came from ancient times when wine was stored in goat skins.

“At the time, there were other bag-in-box products, but Dad was the first to see the concept used for wine packaging.”

On April 20, 1965, patent number 280826 was issued to the company with the invention titled “improved container and pack for liquids”. 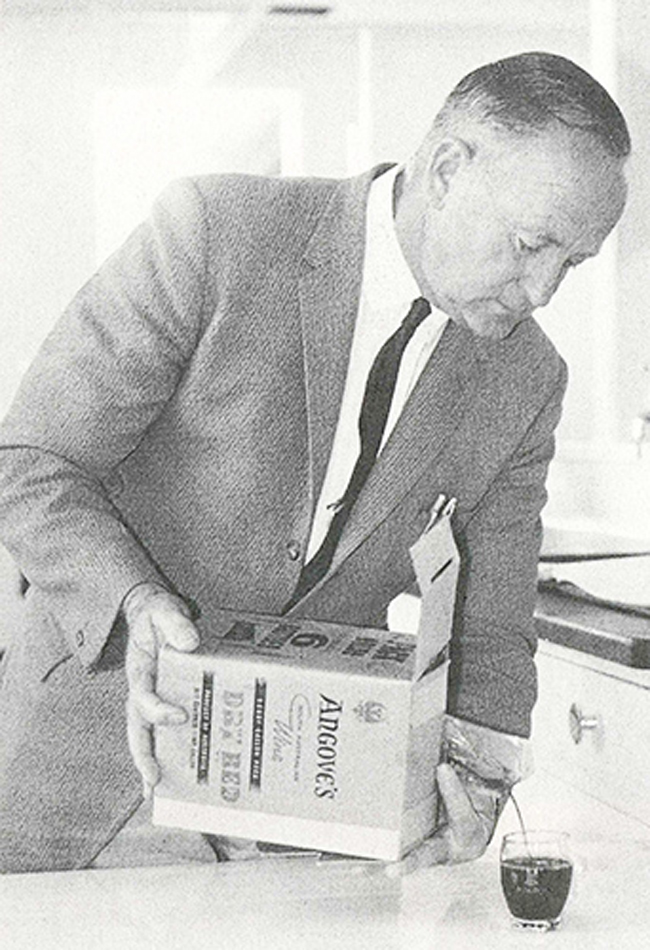 Pouring from the new wine cask was a simple task, as demonstrated by former Angove’s employee Bill Marshall. Photo supplied

The early concept did not include a tapping device; it was simply a plastic bag sitting in a cardboard box. The wine was poured from the top (see Tom Angove demonstrating, pictured right) with the flexible plastic collapsing into the surface of the wine in the bag, hence the “airless flow”. A clothes peg was used to reseal the bag, to prevent spillage and spoilage.

In the winery, the process was just as ingenious.

“There was no smart filling equipment for the bags at the time and so Dad devised a one-gallon header tank that was filled to the exact one-gallon mark and then the wine would free run into the bag that was already inside the cardboard box,” explains John. “It was a slow, tedious process.”

The bags used for the new packaging also presented teething troubles for Angove.

“Early bags were not multi-laminates, as they are today, and oxygen permeation through the plastic gave the product a short shelf life,” says John.

“Dad worked with plastics experts to create laminates to reduce the oxidation factor, but leaking bags from faulty welding was a never-ending problem and a leaking bag at the top of a pallet often caused the whole pallet to be damaged.

“We were the first to market in 1965, but discontinued in 1972, waiting until the technology caught up with the needs for wine in such a package.

“The package has evolved greatly from the early days, from an economy pack with endless problems but with a great fundamental concept, to today’s highly technical tapped convenience pack.”

During this time the packaging was refined to remove leaks through the use of membranes and improved by the introduction of a new tapping device in the early 1980s which created a resurgence in sales.

Angoves re-entered the market in 1984 with its Paddle Wheel brand, but this has been discontinued as the company now focusses all its efforts on its premium wine from McLaren Vale and the Riverland – all sold in glass bottles.

However, John says he believes there is still a place for the “goon sack”.

“The larger-sized bag-in-box units have in the past perhaps devalued premium wine, but I think there is still a fairly strong reliance on convenience that keeps the bag-in-box unit in the market-place.

“The fundamental concept of the airless flow has not changed; I often called my father a frustrated engineer – he loved understanding how things worked and would meet a challenge by finding his own solution.”