In this week’s column, an old brewery gets back to the business of brewing, cherry season begins, food becomes a broader focus for Aldinga village, gingerbread vans and other Christmas bits.

Beer in the blood

Beer is in the Pike brothers’ blood – so it was only a matter of time before Pikes Wines opened a brewery on site in the Clare Valley.

And for a tidy investment of $1 million-plus, the venture is a sizeable priority for the brand that is arguably most famous for its Riesling.

Pikes Brewery started in 1886 under the name of H Pike & Co when great-great-grandfather Henry emigrated from Dorset, England, to Oakbank. There he quickly progressed from making oak casks for Johnston’s Brewery to dabbling in his own homebrew – a trait that passed from generation to generation. The business took a hit during the Great Depression, and when brothers Andrew and Neil later took over in 1984, they settled on wine instead. 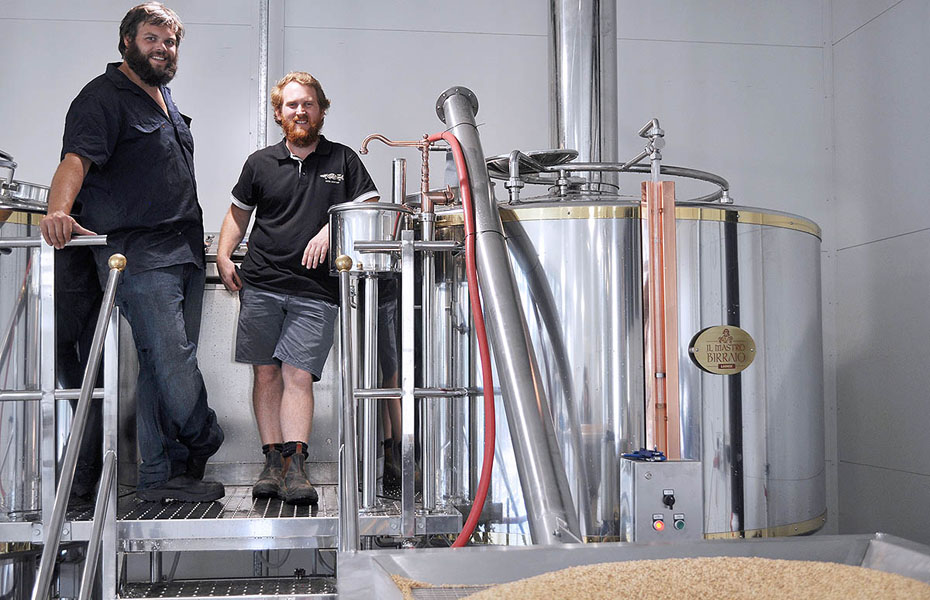 “Brewing is basically in our DNA, but it was the last thing on our minds at that point,” Andrew said.

Pikes has continued to produce and sell a pilsner, sparkling ale and stout through third-party breweries but the consistency of the product was not guaranteed.

“About two or three years ago we decided it was really time to get serious.

“Six months ago, work started on the brewery and (this week) we started brewing.

“It’s a very steep learning curve; brewing is very different to the winemaking side of the industry.”

To kick-start this side of Pikes, they’ve brought in a 2000-litre brewing system from Italy and head brewer Bradley Nolen from Western Australia. Andrew’s son Alistair has also re-joined the family business.

The production capacity will be four times greater than it is currently, and with bottles and kegs to be made and delivered nationwide, boutique beer-lovers can expect to soon see the new product in a pub, restaurant or bottle shop near them.

“The optimum situation is to get our brewing honed and finessed to a point where we’re really happy with the quality and consistency… then we can broaden our horizons and look at introducing other products,” Andrew said

The first beer will be ready for tasting around New Year’s Eve, with the brewery front bar open for tasting in January and just 50 metres away from the current cellar door.
– Candace Keller

Food has recently become a focus at the south coast village of Aldinga. A group of passionate young farmers has accessed prime farming land with sea views at the Aldinga Arts Eco-Village to create a market garden providing seasonal, organic food with food metres, not miles.

Members of the group, Village Greens of Willunga Creek, are into sustainable food production. Lucy Chan and Ellie Firns are current residents at Aldinga Arts Eco-Village and, inspired by the work of permaculturalists Nat Wiseman and Claudia Peoples, they took a permaculture course at The Food Forest.

Wiseman learnt how to grow vegetables on a market garden scale at Allsun Farm in New South Wales and is one of the founders of Wagtail Urban Farm at Mitchell Park.

“Nat follows the Eliot Coleman method of farming that enables you to use small-scale ergonomic tools that use very few fossil fuels, such as walking behind tractors and human-sized long-handled tools,” says Chan.

The group has negotiated with members of the 17ha community-titled property to start preparing 0.2ha of land at the Eco-Village.

“We are starting small to produce food for the members of the Eco Village,” says Chan. “But once the systems are up and running we will expand.”

The plan is to connect with the local and wider community to supply food, promote a sustainable model of farming and to be a place of learning and sharing through workshops, open days and seasonal events.

“We are currently constructing a tool shed and working to irrigate and feed the soil to prepare for cultivation and planting,” says Chan. “We’ve just missed the boat with summer planting, but we should have produce ready into early autumn.”

Village Greens of Willunga Creek has started a crowdfunding campaign to raise money for tools and infrastructure to achieve its vision for the local region.

Owner Richard Maxwell has been living at nearby Port Willunga for seven years and saw a need for the area. “I used to do mobile catering back in the UK, but I’m actually a civil engineer who really likes good food and cooking,” he says.

Maxwell’s Grocery is open Wednesday to Sunday for breakfast and lunch and later on Friday nights. 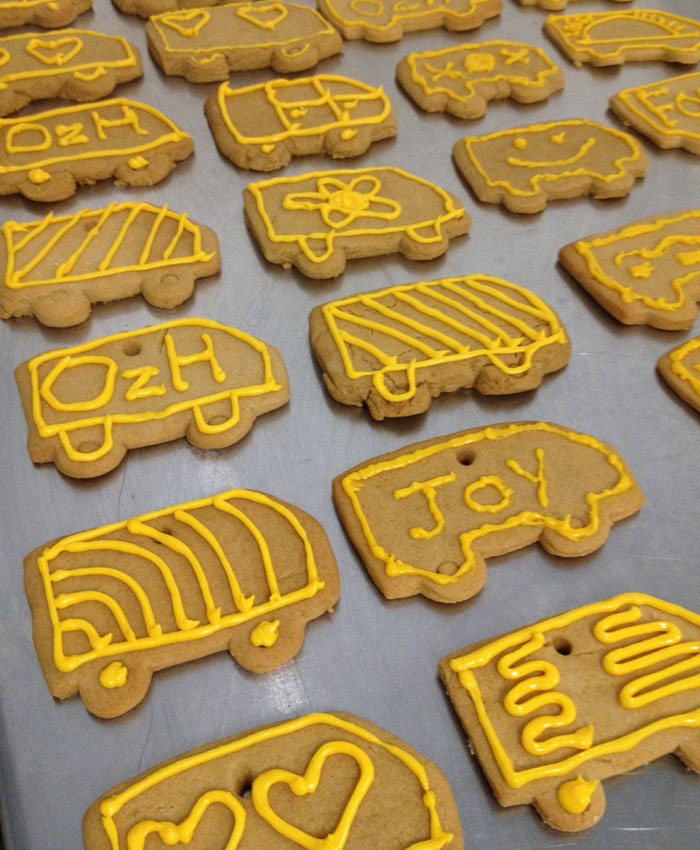 OzHarvest will open its festive yellow market stall of community nourishment and goodwill, including the 2014 Tree of Goodness and the new Gingerbread Vans, tomorrow at the Adelaide Central Market.

The OzHarvest Tree of Goodness is a way for market-goers to help put nutritious food on the tables of people in need, by donating or purchasing a Christmas gift, and helping to decorate the tree with yellow. Every item purchased or donation made represents a decoration that will be added to the tree.

“Every dollar donated means we can deliver two more meals for men, women and children in our community who are doing it tough,” says OzHarvest state manager Hayley Everuss.

Compared to last season, Christmas 2014 is shaping up to be a bumper season for cherries, says Adelaide Hills producer Claude Coterno from Merry Cherry Farms at Norton Summit.

“2013 was the worst year in 40 years – we had no cherries – but this year there is quite a bit of fruit and it’s ripening all at once in time for Christmas.”

Varieties such as Stella, Lapin and old heirlooms (Napoleon, William, Sir Tom and Sir Don) are all coming on to the market this week, he says, and prices are as low as $8 per kilogram this year.

Coterno says the best way to eat cherries is fresh. He recommends sampling before you buy and says bigger is not always better. “South Australia doesn’t grow a lot of massive fruit and sometimes it’s the smaller varieties that are sweeter.”

The cherry season is short, as cherries are unable to be stored for long periods. It generally finishes in the first or second week of January, so the best way to enjoy cherries for longer, he says, is by buying in bulk and stewing and freezing, or by drying or juicing.

Lunch with a Barossa Legend

Today is the final day to bid for tickets to sit with your chosen Barossa winemaker at the Barossa Wine Chapters Auction and Lunch on Friday, April 17, 2015, at the Wolf Blass Visitor Centre.

Barossa Grape and Wine Association, in association with Langton’s Wine Auctions, is running the charity auction via online bidding at www.langtons.com.au.

Tickets include a three-course Barossa-inspired lunch with your chosen winemaker and the chance to create your own Barossa wine collection direct from the winemakers’ cellars by bidding at the Barossa Wine Chapters Auction, run by auctioneer Andrew Caillard, MW.

Net proceeds from the auction are going to 18 charities, including Variety, Royal Flying Doctor and Prostate Cancer Foundation.

If the Mt Pleasant Butcher is not within shopping distance, Unley Meats on Duthy Street is the place to go for the most delicious, sweet smoked salmon. 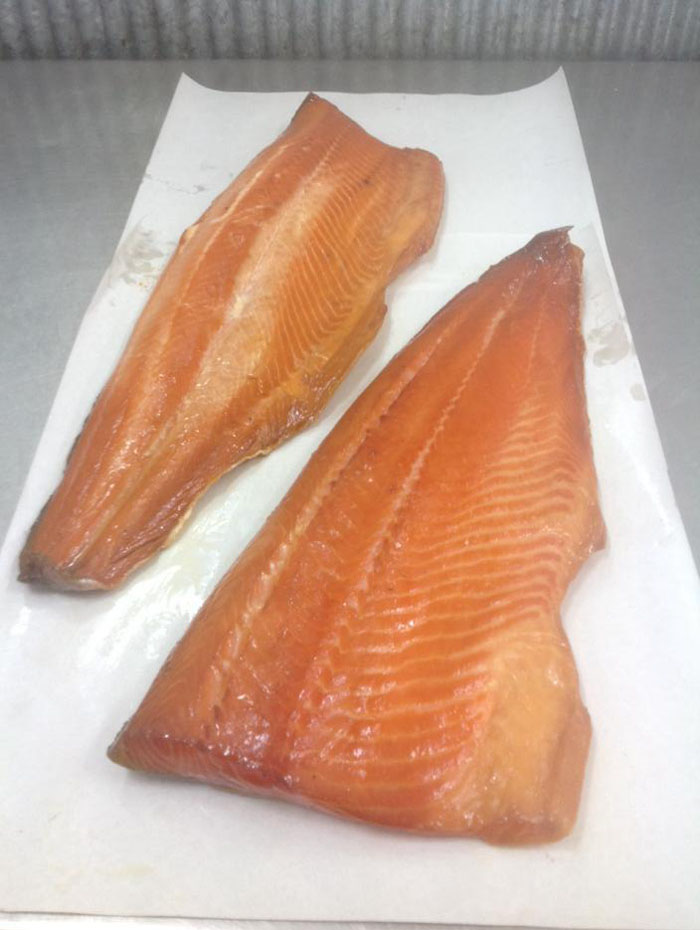 Like Mt Pleasant Butcher, Unley Meats still has its original smokehouse and owner/butcher Nigel Hassal produces smoked salmon and other smallgoods in it the traditional way.

“The salmon comes in fresh and then I soak it in my own brine for 24 hours and then dry it for another 24 hours, before putting it into the cold smoke area, which is heated to 45 degrees by burning redgum for another 10 hours,” explains Hassal. “It’s a process that that takes three days.”

Unley Meats smoked salmon costs $42/kilogram over counter. A side for the Christmas table will weigh in at approximately 1.2 kilograms, but smaller pieces are also available.

Speaking of smoking, The Curious Squire is offering the opportunity to take American-style Yoder smoked turkeys to the Christmas table. Its pre-ordered 6kg birds cost $75 each and will be available to pick up from the North Adelaide restaurant on Christmas Eve.

Another way to enjoy turkey this Christmas is with a piece of Woodstock Turkey and Muscat Pate produced by Woodstock Wine Estate’s executive chef, Nigel Munzberg.

This delicious pate is made from locally sourced turkey livers and Scott Collett’s Muscat, sealed with Woodstock Shiraz and orange jelly. The pate has always been a signature ingredient on the McLaren Vale winery’s Regional Platter, but is now also available for sale at the cellar door. Contact the winery for stockists around Adelaide.

Made with Australian raisins, currants, dates and apple, plumped with brandy and mixed with ground spices, the Kyton’s Christmas Pudding is rich and moist – all you need to do is make the brandy sauce.