In today’s column, new bar and cafe openings, looking forward to Tasting Australia, penalty rates and plenty of other news.

There have been some interesting new openings around town at the cafe/bar end of the market.

Penny University has added to the off-Rundle food boom, opening its doors this week. The Union Street cafe specialises in breakfast and brunch (the menu includes corn fritters, French toast and the “Shakshuka” – one pan with sausage, hot green peppers, tomatoes and baked eggs served with Turkish toast). It’s the latest venture from the team behind Big Table at the Central Market. For lunch they’re serving fresh salads, wraps and rolls.

The impossible-to-pronounce Coffylosophy cafe on Hutt Street is also plying the breakfast/brunch market – we haven’t been there yet, but it’s a very appealing-looking place.

Yankee Cafe on Henley Beach Road has been open for a while, and is aimed at the growing demand for American-style comfort food – think Sloppy Joes, Reuben sandwiches and chicken-fried steak.

And finally, after a very long wait, Peel Street bar Chihuahua is set to open, joining this burgeoning off-Hindley food and wine community. Also on Peel Street, Kaffana has recently opened. As reported by this column last year, the Balkan bar and grill is run by the Vujic family (formerly of Zorro’s in Handorf), and is bringing an interesting Serbian take on casual dining in the ground floor of historic Peel Chambers. There’s also a good collection of the traditional plum brandy – slivovitz – to accompany steaks, tapas-style snacks, and a “Balkan burger”.

Regional produce will be coming to the city as part of Tasting Australia.

The revamped Tasting Australia is on Sunday week (April 27), with Victoria Square providing a much-needed physical focus for the state-wide event.

The recently redeveloped space is styled as the festival’s “Town Square” and it will kick off with a Fork on the Road food truck festival on the Sunday (11am-5pm). The square will also host the “express lunch” (April 28-30) and be a place to purchase regional fare from food-growing regions across SA (throughout the week-long event).

In the evenings from May 1-3, “Chefs on Decks” will feature – as the name suggests – chefs serving up food and tunes. Star chefs in town for the festival will “reveal the soundtracks that have inspired them and get their kitchens pumped and prepping”.

Away from the square, one event that looks extraordinary is the Barossa Food Forager’s Trail. The wonderful Margaret Lehmann will host the day-long journey through three working farms in the Barossa where you will meet the producers, taste the produce and hear great stories about the valley and the food.

All over bar the crackling

The organisers of the independent Adelaide Food and Wine Festival are celebrating a very successful second year.

The festival, which finished on the weekend, resulted in a slew of sold-out events, with locals obviously attracted by the festival’s sometimes off-beat program. 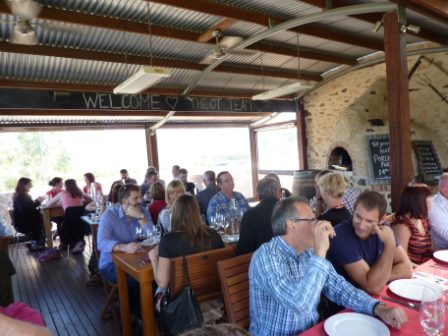 The deck at Oliver’s Taranga.

The Forager had the pleasure of attending an associated event on the weekend – a “porchetta party” on the deck at McLaren Vale winery Oliver’s Taranga.

There was pork sausage pizza from the wood-fired oven, wild-boar sausages, cotechino, and – to end it all – an unctuous (and gigantic) porchetta, slow roasted over wood coals. Interestingly, for a very meaty event, the salads and vegies – all cooked by chef Todd Steele – were  memorable and delicious. There was also plenty of excellent Oliver’s Taranga wine.

The good news is that even though the festival is over, the porchetta party is a regular event at the winery. The next party is scheduled for July – details here.

Restaurant and Catering SA has released results of a study, undertaken by UniSA, into the impact of South Australia’s part-public holidays on Christmas Eve and New Year’s Eve trading.

The study is being accompanied by an advertising campaign against the part-public holidays, which were introduced in 2012 as part of a deal between the Government, unions and Business SA to get longer opening hours in the city. The issue is that public holidays attract penalty rates, thus increasing the costs of opening.

Wherever you sit in the debate, some of the numbers are a worry.

The Adelaide Showground Farmers’ Market will be closed on Easter Sunday – but there will be an Easter Twilight Market today (April 16) from 3-7pm to stock up on fresh food and Easter treats for the long weekend. The Prospect off-shoot will be on tomorrow as usual.

If you’re looking for something to do in the Adelaide Hills tonight, there are still tickets left for a food and wine matching dinner at Stirling’s Miss Perez Kitchen and Bar. The Miss Perez food is matched with wines from Deviation Road. To book, call Miss Perez on 7225 0264. View the menu here.

A couple of local lads have launched a free restaurant booking app. SpareTables allows diners to search for a free table at a local restaurant. It’s a booking service, they say, not a deals app, however “most restaurants offer a minimum of 20% off if you book using the SpareTables interface”.

For those of you who’ve been asking, our regular restaurant reviewer Frank Grenfell has been “on assignment”, as they say in the classics. He’ll be back next week.