You could get  your Easter eggs wrapped in bright foil from the supermarket – or you could buy something more memorable, preferably local and ethically produced.

The first stop for South Australians is usually Haigh’s – the family-owned company that manufactures its chocolate from scratch (ie starting with the raw cocoa bean).

The range of chocolate eggs and other Easter treats still includes the chocolate Easter bilby, with part of the proceeds going to the Foundation for Rabbit-free Australia. Check the Haigh’s website for store locations (in the city, they’re located in Adelaide Arcade, the Beehive Corner and the Central Market Arcade).

For something different, try Adelaide chocolatier Steven ter Horst’s range of Easter eggs, many of which are based on his popular chocolate tablets. At his Rundle Street store there are chocolate hens, a decorated dozen in an egg carton, and chocolate eggs including milk chocolate, white chocolate with Tahitian vanilla, honeycomb, freeze-dried blackberry and raspberry, and more.

New to Adelaide is Victorian premium chocolatier Koko Black, which has just opened a chocolate shop and cafe at the Rundle Mall end of Adelaide Arcade. It has a classy range of Easter goods, including a huge “Golden Egg” containing a “salted caramel surprise”, and lovely packages containing a mix of eggs and pralines. It also has traditional chocolate bunnies.

Bracegirdles, whose chocolate cafes seem to be multiplying like, well, rabbits, also has some cute Easter gift options, including hot cross bun truffles, and “Babushka” eggs – three eggs inside each other with a surprise to discover at the end of all that eating.

Have we missed your local favourite? Let us know in the comments section below.

Everyone would be happy with a carton of these from Steven ter Horst.

We’re late to this, but there’s a new Sunday morning hangout which should be on every food lover’s agenda.

The Market Shed on Holland St is a treasure trove of organic produce and excellent breakfast options, tucked in behind the IGA supermarket on Gilbert Street.

It’s open every Sunday from 9am to 3pm and it adds a new layer of meaning to the word “vibrancy”. This place goes off.

You can get excellent coffee and a cooked breakfast (even a breakfast pizza from the wood-fired oven in the corner). Stallholders sell organic herbs, spices, fruits and vegetables, baked goods, gluten-free goodies, organic juices, you name it.

The best thing about it is the vibe – happy, informative, comfortable. It’s located in an old Porsche mechanic’s shop, and it’s decked out beautifully (there are even armchairs to lounge in).

It’s the brainchild of the owners of the IGA – Jonathon Kaitatzis and his mum Marilyn.

Get down there and enjoy.

The Market Shed on Holland St.

We’re right in the midst of this grassroots festival and there’s good news and bad news.

Bad news first: the Town Picnic scheduled for Saturday (April 12) in Rymill Park has been postponed due to to heavy rain forecast for Adelaide over the next few days. The ground will just be too sodden. We’ll report back as soon as we find out a rescheduled date.

The good news is that there are still tickets available for a range of interesting events.

If you rush, you might also snag a ticket to the Don Dunstan Tribute Dinner at Willunga’s Fino restaurant on Thursday evening (April 10). Word is that plenty of people are dusting off their safari suits for the occasion. Details here.

On the weekend, there’s a heap of regional events across the state. Go here to find one that appeals to you.

A word about last Saturday night’s Market Feast, which took over the Adelaide Central Market after dark. There has been some negative feedback on social media. Our view – it was great fun, and a real treat to be in the market after hours. There was some seriously good wine, great music, and the food was rustic and plentiful. Sure, it was a little rough around the edges at times, but this was part of its charm (it was a true novelty to fetch hunks of cheese from the “barrow” and carry it back to our guests in our arms). There were more than 400 guests and we were all fed in reasonable time – quite a feat. I agree it wasn’t an extensive menu for vegetarians, although the mushroom veloute was very good! 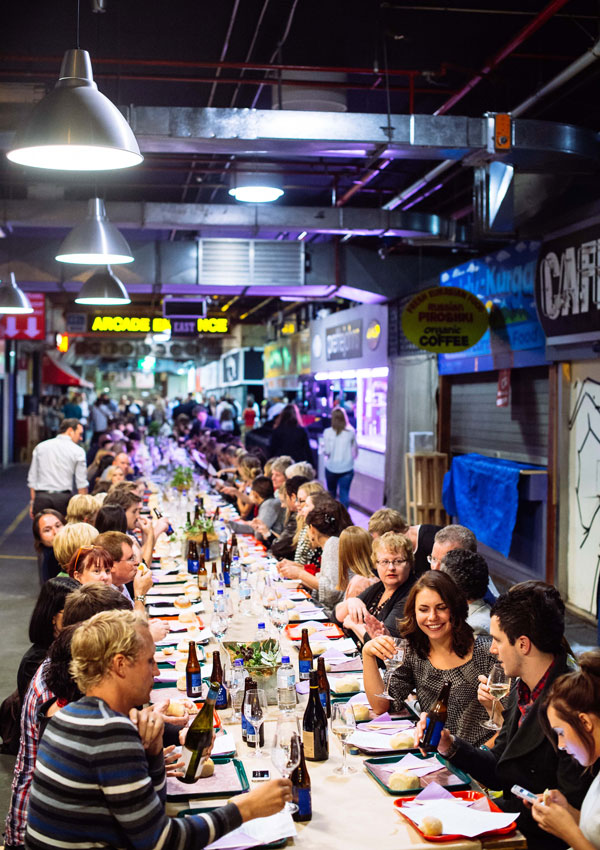 The Forager was struck this week by a wok – not physically, but metaphorically. While ambling down memory lane, my colleague Kevin Naughton came across an old interview done by ABC’s AM program in 1977 at the launch of Don Dunstan’s cookbook.

The interviewer, Trevor Watson, was intrigued by the then Premier’s fascination with a particular Asian cooking pot called a wok.

“Could you explain that for me,” asked Watson.

“It’s the most widely used Asian cooking pot,” Dunstan told the young reporter. “A sort of deep frying pan in which you stir-fry things. This is a technique every household in Australia should know about.”

It suddenly dawned on us that not only was this a key moment in Australia’s culinary history, but also the moment when Dunstan planted the seeds for a mini-saga that would erupt in the seat of Dunstan at the 2014 state election. Who would have thought back in 1977 that Wok-In-A-Box would be a dominant feature on the political landscape?

In further signs that our food habits have come a long way since 1977, the same set of historic interviews includes the ground-breaking story on AM that the Tip Top bakery in Sydney was now producing a thick-sliced loaf. The slices – up to 11.11mm from 9.53mm – had a downside, reporter Mark Llewellyn noted: “There will be fewer slices per loaf”.

It seems to me that the State Government feels like it “owns” the Leigh Street/Bank Street/Peel Street district off Hindley Street. Why else would it be telling the cafes and restaurants how to run their businesses?

Readers may be aware that Tourism Minister Leon Bignell this week took restaurants and cafes to task for not opening for breakfast or brunch before the Crows v Swans match last Saturday.

Restaurateurs at that end of town didn’t open because they didn’t believe they could make much money – or indeed any money – given weekend penalty rates, and the low margins on breakfast meals. They’re also in a part of town which, frankly, is dead on the weekends. Would a passing crowd for a footy match at 1.4opm want breakfast in sufficient numbers to justify opening up? And, probably more significantly, would it suit their business model which is based on Monday to Friday trade?

Instead of worrying about whether Adelaide is making the most of the Oval’s “vibrancy” potential, we should listen to the likes of Tony Carroll from Jolleys Boathouse – probably the closest restaurant to the Oval.

“It’s definitely a positive for city businesses, but it’s not as simple as ‘open the doors and they will come’,” Carroll says.

“The schedule is all over the place – the games are all at different times. This first year will be a real ‘suck it and see’ for businesses.”

He believes people will look for good food before and after games, but businesses and patrons will take some time to adjust their business models and behaviour.

On the night after the Showdown, for example, Jolleys was already packed with non-football people, meaning he had to turn away some of the footy crowd. Before the games, his experience so far is that people are getting in to the Oval early, missing the lunch period for restaurants.

And it’s not just penalty rates that are an issue (which Carroll deals with on Sundays by including a surcharge), it’s a complex interplay of lots of factors.

Carroll’s bottom line: it will take the first season to sort out the best opportunities for businesses. Let’s not jump to any early conclusions.

Sounds sensible to me.