In the spirit of the officially sanctified yarts drink-up, the correspondent fled the in-your-face cruelty of the record heat, record wet vintage and found himself carriage to the Big Smoke.

It was a cowardly act. The writer casts off to escape the intrusion of the internet. His $15 Nokia has a clock with hands on it. It can’t take photographs or connect to anything other than people’s voices or SMS texts. When people send advertisements or photographs to it, it comforts its human with the polite advice: “Message cannot be displayed.” Perfect. At Casa Blanco, the internet, its email thing, and all those alluring avatars live in a cranky octopus/tarantula cross that lives on the work desk, and stays there. Like the severed twin in Basket Case, its wrangler throws it titbits and watches it burp and slurp.

The escape was driven partly by the feeling that crazy hatred had invaded that critter on the desk. When the rain came to drive away the heat, the writer took a simple photograph of the stationary vehicles in the farmyard. They looked kind of neat, all lined up, smug in the drizzle; the utes and tractors and four-wheel bikes. You could hear the famished vineyard drinking. The men were in the winery and sheds, looking out, waiting. Happy about it. So as a reflection on the industry he is paid to observe, the photo seemed a fairly inoffensive item to post on the blog.

“And I bet you write this vintage off like you did for the 2011,” some anonymous berk barfed immediately into the comments box, “… even though there were many fantastic wines produced. Unfortunately you and other idiot wine writers spoilt the sales of 2011 for many small winemakers who DID produce terrific wines. Do us all a favour and say nothing more about 2014 vintage.”

The seemingly inoffensive photo of vehicles at rest.

Securing transport from the Kangarilla vineyard in which said correspondent resides is tricky.  He wisely let his driver’s licence expire in 1989, removed himself from the risk of steering a motor vehicle while differently abled, and became an expert at public transport and Punjabi. Although a quarter of a century back the cab ling was Greek: in those days the Hon Tom Koutsantonis steered the writer to-and-fro The Exeter in his perfumed Independent taxi. They were the days when the correspondent bought his shoes from Anthony LaPaglia in Regent Arcade, and was served at table by Geoffrey Rush at Possum’s.

Enough nostalgia. Casa Blanco’s on the main road connecting the wine regions of the Adelaide Hills and McLaren Vale, yet the nearest bus terminals are twelve kilometres in one direction (McLaren Flat), and nine kays in the other (Chandler’s Hill); there’s no connector.  Not that they’re much use if one can get to them: the Flat bus takes one to Seaford Rise; the Hill bus to a windy roadside at the top of Flagstaff.

Engaging the assistance of a hot attourney who likes to drive and chat, the thirsty Whitey hit the East End. He set himself up there at a table with a Highland Park and a Cooper’s chaser, asked a tattooed bloke at the next table to watch his carpet bag while he attended the gentlemen’s room and returned to find the cartooned one had vomited all over it.

This fad for body art is fascinating. It makes men fake yawns so they can stretch back and, in a display that would offend a Mandrill, hold their arms behind their heads to expose the grotesque tatts in their armpits. Which the vomiter did as he pushed the bag back with his foot.

“No worries mate,” he said, wiping his mouf with the back of his huge illustrated paw.

In a forgiving respect of this artistic lead-up to that ill-attended cabaret called the election, the writer removed himself to the Arab Steed, where illustrated bodies are rare, nobody talks much about dancing or poetry, and there are few instances of people vomiting on luggage. That Hutt Street Paris Quarter – a cruel piss-take of an appellation – is a place where you talk about the bean or barley yield; there are more RM Williams than Nikes or precipitous strappy Manolos, Ferragamos or even Jimmy Choos. Feels safer. There was the retired grazier, benefactor and rugbyist Charles Hawker, with a quiet group of red men. Folks who will never fall off their heels.

Vintage was not mentioned.

Across the road is Louca’s, a fish temple little Whitey had not previously attended.  There he struck the former Minister of Transport, to whom there was no point in complaining about the Kangarilla bus crisis. Apologies were lodged in the matter of the bouquet of the carpetbag; large drinks were well had and Louca’s rose quickly to the top of the list of local fish fare. Ring Peter (8232 6792) a few days in advance and beg him to select you a big snapper.

Having forgotten to attend the wine thing at the Convention Centre, the traveller crashed at the home of a friendly headmistress who kindly scrubbed the bag. This was in the more aptly nick-named Beirut Quarter, aka the south-west corner. With its quiet mosque, Twangcentral guitar emporium and estimable Juker, aka the Duke of Brunswick, it is very different to the East End and the Paris Quarter, and instilled the writer with such a frisson of risk he got his thumb out and essemmessed an avatar he’d flirted with through that octopus/spider thing back on the desk. Like to share a brekky omelette in the morning haze? “That would be fabulous,” she shot back, “but I’m all checked in.”

Checked in? Checking out: fleeing the country.

Another reason to leave even the ancient Nokia at the depot.

So. Host headmistress was taking her photographer off to the annual White Party given by the prominent jeweller Albert Bensimon, who is not running for election this year. One had to wear white. This seemed a pleasant wedge to avoid mentioning vintage at the big wine thing at the Convention Centre. It also seemed a good opportunity to recover from the bitter breakfast disappointment, despite the matter of the writer having only black clothes. 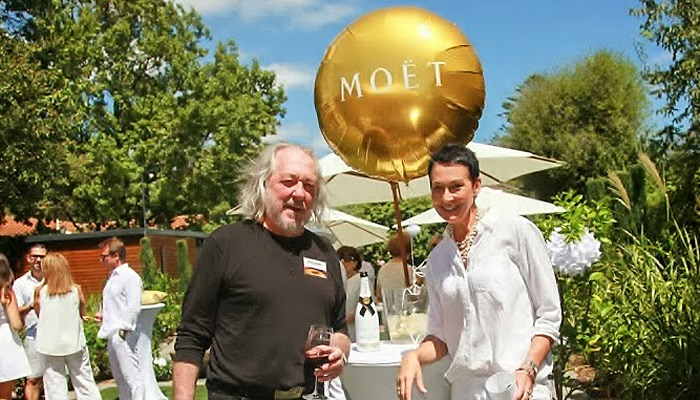 It was brilliant. There were many beautiful women in pure shimmering white, men disguised as lawn bowl aficionados or Gatsbys; some synagogue regulars dressed as Arabs, and the great lawyer Michael Abbott, who reminded the black White that he hadn’t sued him. Yet.

As the Moët rose above the ankle straps of all those shoes absent from the Arab Steed, the driving attourney must have sniffed the whiff of litigation from afar: she made a perfectly timed mercy dash and ran the writer back to the safety of the Kangarilla bus-free zone.

Where vintage progresses with deep calm. In fact, none of the hardcore Yangarra fruit has even been picked. There’s no noticeable splitting of the berries, as has happened in many vineyards. The vines are relishing this cool wave, and the whole joint smells as fresh as a farmer’s market. The vineyard blokes are mowing the lawns while they wait.