Director Charles Sanders kicks off Australian playwright Stephen Sewell’s play at a blistering pace, with bleak black and white projections on the rough white brick walls, an actor visible in an upstage window and Terence Crawford centre-stage experiencing a meltdown.

Crawford plays Max Lewin, a Jewish scientist who, along with fellow scientist, Sebastian Ashkenazi (Roman Vaculik), is searching for a quark which they believe will complete their research into the physical world and so gain “truth”.

The search for truth is a recurring theme within each of the characters and some of the most fascinating scenes are the two scientists doing mathematical calculations on transparent screens.

Crawford is excellent as Max: he has found “truth” in his acting and he believably portrays the dilemmas facing a family man who is a scientist and a concerned citizen. He is full of conviction and doubt; wary of politicians but blind to personal events.

Patrick Frost is a powerful and disturbing presence as Dr Mencken, the bureaucrat in favour of the government using technology to find out as much as it can about citizens. Anna Cheney and Georgia Stanley play dual roles, providing distinct characterisations for each. 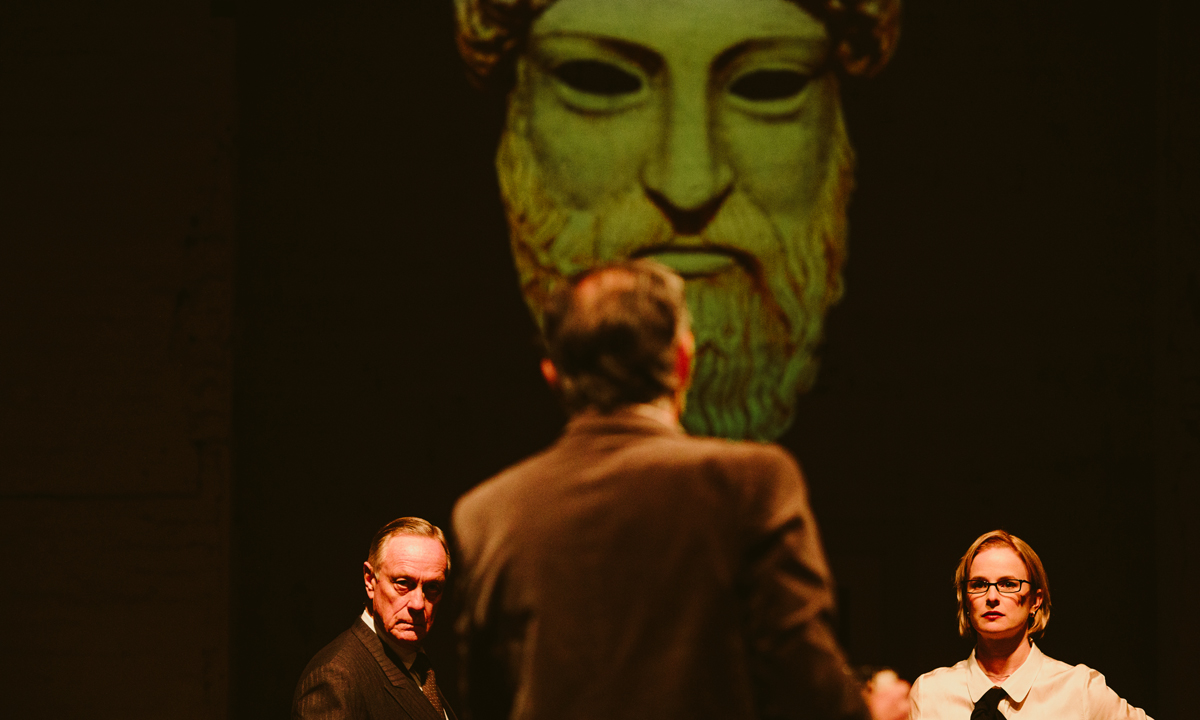 As enjoyable as the Queen’s Theatre is, it presents some difficulties acoustically, and the balance between music and voice was not as good on opening night as it needs to be, with the soundscape sometimes too intrusive. Designer Karla Urizar has made good creative use of the space but, because there is a lot happening visually and within the narrative, it is important to be able to hear what is being said.

Sewell’s play deals with numerous issues, including German/Jewish history, violence in revolution, parents not knowing their children, and the pros and cons of scientific research. Although the juxtaposition with personal and family scenes sometimes seems a little too much like an Aussie soap opera, the intrigue of the play and the battle between the individual and the state is compelling.

Welcome the Bright World has relevance for today with its questioning of how much the state should know about its citizens and how much power it should have over them. This is particularly so with China’s recently revealed plans to gain information on all citizens that will enable it to monitor their “social behaviour”.

The text, performances and staging of this production make it well worth a look as a contribution to the discussion about what kind of society we want to live in.

Welcome the Bright World is being presented by House of Sand, in association with the State Theatre Company, at the Queen’s Theatre until October 6.