Directed by Jay Roach (Trumbo and Game Change), with a whip-smart script by Charles Randolph (The Big Short), this riveting and meticulously researched drama examines one of the first high-profile sexual harassment cases of the #MeToo movement.

The film chronicles how Megyn Kelly (Charlize Theron), one of the star anchors of Fox News, and Gretchen Carlson (Nicole Kidman), the host of Fox & Friends, brought to justice lecherous media mogul Roger Ailes (John Lithgow), by exposing the system of sexual harassment he implemented and exploited within the Fox Network.

The film opens in 2016 at the height of the US presidential campaign. Fox News is hosting the Republican debate and Megyn Kelly surprises everyone by calling out Donald Trump on his misogyny and questioning his egregious treatment of women.

Her question generates headlines, as does Trump’s incensed response in which he makes an abhorrent remark about Kelly’s menstrual cycle.

Kelly weathers the intense personal and professional fallout, only to cave to the pressure months later in an interview where she goes easy on the soon-to-be President, clearly wary of the consequences of being perceived as anti-Trump while working for a network with overt right-wing allegiances.

This happens at a moment when the Fox Network, while clearly in the Republican camp, is still undecided about backing Trump as the prime Republican presidential candidate. Kelly’s boss, Roger Ailes, head of Fox News and a right-wing ideologue, sees Trump as a media goldmine, but Ailes’s boss, Rupert Murdoch (Malcolm McDowell), at this point in time, remains sceptical. 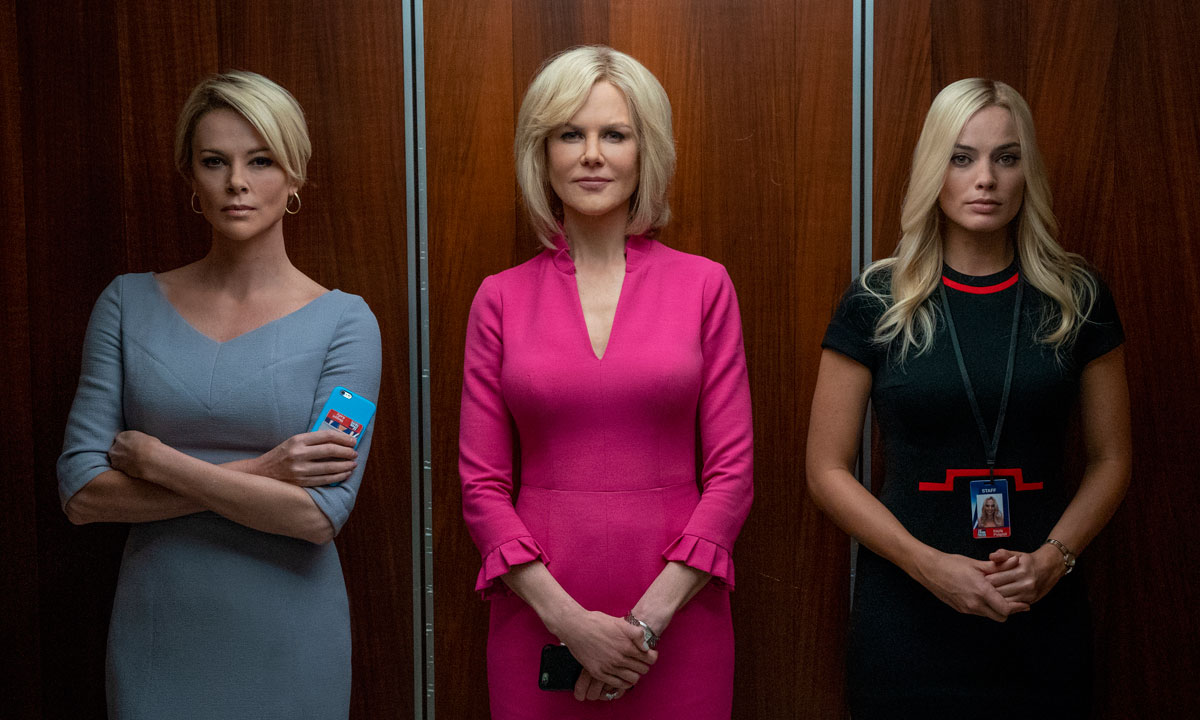 Charlize Theron, Nicole Kidman and Margot Robbie are all exceptional in their roles. Photo: Studio Canal

Kelly’s decision to take a feminist line with Trump is in stark contrast to her decision to keep secret the sexual harassment she has endured at the hands of her boss. Bombshell shows Ailes running Fox News like a corpulent despot, treating the women under him as his personal harem and micromanaging every aspect of the news feed down to the wardrobe, hair and make-up of the women on-air, even insisting they sit behind glass desks so the audience can see their legs.

Gretchen Carlson reaches breaking point when she is fired by Ailes for repeatedly covering stories focussed on or about women. She is also a victim of Ailes’ harassment and decides to act when her lawyers come up with the strategy of having her sue him personally rather than the network that enables him. But the suit won’t stick unless other women come forward.

The third woman central to the story is an ambitious young Christian named Kayla Pospisil (Margot Robbie), who is a composite character representing many of the women behind the scenes at Fox News who bravely came forward and added their names to Carlson’s legal action. Pospisil finds work on Bill O’Reilly’s team and learns the ropes from Jess (Kate McKinnon), who’s in the closet at Fox as both a lesbian and Hillary supporter. Keen for an on-air role, Pospisil finds herself in Ailes’ office and in an excruciating scene we witness how he exploits the vast power discrepancy, leaving Pospisil humiliated and manipulated into feeling that taking the abuse is the only way to keep her job.

Since the #MeToo reckoning catalysed by the Harvey Weinstein scandal, we’ve been waiting for the writers and directors of Hollywood to speak about the human fallout of the institutionalised sexual harassment that has been rampant in that industry.

This insightful and satisfying film puts women’s experiences front and centre, showcasing the courage and sacrifice necessary to make a difference in this world.

Theron, Kidman, and Robbie are all exceptional in their individual takes on women who felt deeply compromised and trapped by the harassment they endured but together achieved justice and, as an unforeseen result, sparked a movement that is changing the world.