There’s something about the Australian context that lends itself to explorations of horror. As I have argued elsewhere, the combination of what historian Geoffrey Blainey famously described as the “tyranny of distance,” the barrenness of the Australian outback and landscape for European settlers, white Australia’s convict origins, and its guilt regarding the genocide of the Indigenous Australians, have all helped create a cultural milieu ripe for narratives of anxiety, despair, and terror.

Some of the best examples of horror and fantasy genre films have emerged from Australia, from Peter Weir’s masterful The Cars that Ate Paris to Leigh Whannell’s recent Upgrade.

Unfortunately, The School, a new film from writer-director Storm Ashwood, is not one of them. Like many of the 1980s trashploitation films by which The School seems to be inspired, the best thing about this kids adventure-cum-horror film – think The Goonies meets Silent Hill – is its poster (pictured below).

The film opens quite well, recalling, in its pre-title sequence, recent, closed-room horror thrillers like Saw and Cube. The protagonist, Amy (Megan Drury), wakes in a grimy, post-apocalyptic style building in a bathtub full of blood, to find herself under attack from “hungries,” zombie-like creatures who crawl along the ground, as young Timmy (Jack Ruwald) tells her.

From this point, though, things get murky, with the story cutting between Amy’s past – she is a doctor who works in the same hospital in which her son has lain in a coma for two years following a near-drowning accident – and “The School,” a kind of purgatory presided over by Escape From New York-style gangs of upset schoolkids and an array of creatures like “weepers” and “the wall walker.”

She discovers that her son David (who is or isn’t dead?) is in a place called the Forbidden Zone, and sets off with two young guides, Timmy and Becky (Alexia Santosuosso), to help her navigate the nightmarish School. Along the way, they battle creatures and the more menacing gang, ruled by the tyrannical and predictably camp Zac (Will McDonald). It culminates with various revelations that aren’t at all unexpected, and yet still don’t seem to make much sense according to the rules established by the film itself.

The filmmakers seem to think it’s more interesting if the audience doesn’t know what’s going on, and that confusion automatically leads to curiosity. This, of course, usually isn’t the case.

Its incoherent story is matched by limp design choices. It embraces a trash aesthetic, and yet looks cheap and ineffective, and thus lacks the capacity to convince the viewer and make us believe in this world. The creatures look like they’ve come from a low-rent video game, and the score is awkward in its attempt to create an atmosphere of dark fantasy.

It is critical to the success of a film like The School, so centralised as it is around the interior psychological and emotional shape of its protagonist, that its lead actor is flawless; this, unfortunately, is not the case here – Megan Drury’s performance is wooden and melodramatic, and not at all compelling.

Indeed, the worst thing about The School is the acting. Aside from the always excellent Nicholas Hope in a small role, most of the performances are well below what one expects from a professionally-made feature film with these resources.

Even though it’s not a complete disaster – few films are, and The School is efficiently shot and edited – it is a good example of an indie film that doesn’t work in part because of a poor story and script. 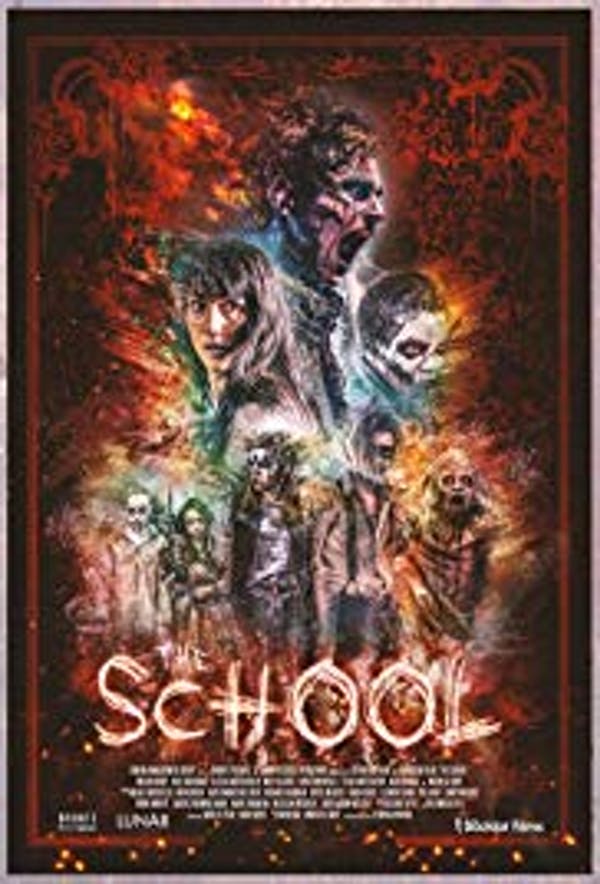 Poster for The School.

The scenario of the film should be engaging – seeing someone trapped in an inescapable hell automatically raises compelling existential questions, which explains why it’s been the premise of a diverse array of narratives from Jean-Paul Sartre’s play, No Exit, to the recent television series Wayward Pines.

And yet The School just doesn’t seem to know what it’s doing – it never gets into, for example, the potentially interesting material raised by the overlaying of two key modern disciplinary institutions, the school and the hospital – instead settling for lines like Dr Masuta’s (delivered by Nicholas Hope with a serious face): “And hell, like heaven – it’s only a story… Hell exists only in the mind Amy. It is the place we imagine all our suffering belongs.”

The School is a dreary and unsatisfying film; any potentially interesting notes are drowned out by the acting and heavy-handed approaches to most of the key cinematic areas, including composition and production design. It is a shame, because there are much better indie Australian genre films around – Michael Chrisoulakis’ Los Angeles Overnight, for example – that fail to acquire local theatrical release.

Ari Mattes is a lecturer in Media Studies at the University of Notre Dame Australia. This article is republished from The Conversation under a Creative Commons license. Read the original article.