There are many confronting scenes in new documentary Remembering the Man – including photos of men ravaged by AIDS and videos of hate-filled anti-gay rallies – but at its core, says filmmaker Nickolas Bird, is an incredible love story.

It is a story with which many people will be familiar: that of Timothy Conigrave and John Caleo, who met as Catholic schoolboys in the mid-70s and had a tempestuous 16-year relationship documented in Conigrave’s memoir Holding the Man.

The book was published in 1995, three years after Caleo had died of an AIDS-related illness and several months after Conigrave’s own death.

“I’ve always seen this as an incredible love story, and Tim’s bravery at the end in finishing his book is amazing,” says Bird.

“I don’t think he realised how much he loved John until the end.

“He was not an emotional guy, but you can see how broken he is at John’s wake. It wasn’t until I saw that photo that I really understood him.” 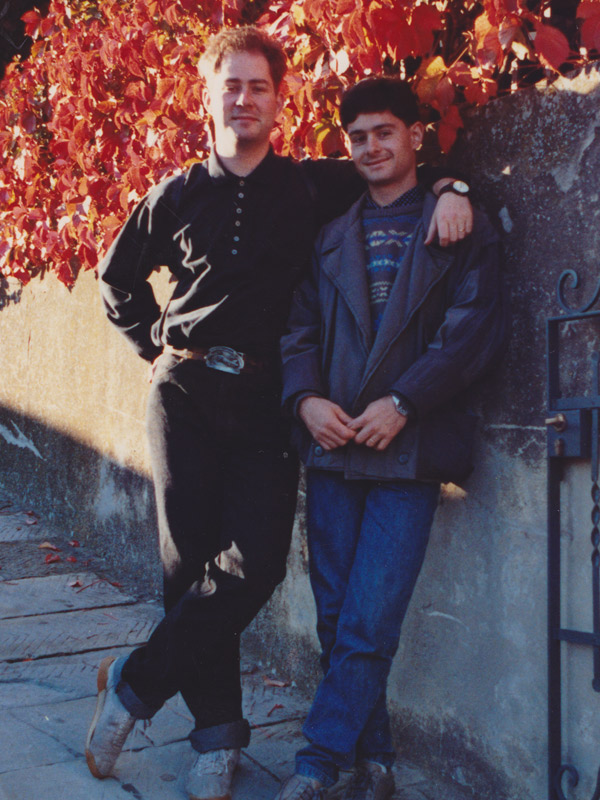 Remembering the Man will premiere at the Adelaide Film Festival this Sunday, and follows the release two months ago of the Neil Armfield-directed feature film Holding the Man, which is one of the top 10 performing Australian films at the box office so far this year.

Melbourne-based Bird says he and co-director Eleanor Sharpe, both of whom will be in Adelaide for the Remembering the Man premiere, have been working on their documentary for around five years.

“We didn’t even know there was a big feature when we started making the documentary.

“I see them as worlds apart – a doco is a doco and a feature is a feature. I was never worried. I just saw them as working in conjunction with each other.”

While Holding the Man features a high-profile cast including Guy Pearce, Geoffrey Rush, Sarah Snook and Ryan Corr, Remembering the Man is a gritty documentary offering a range of different perspectives and relying more on interviews and old photos and video footage than on dramatic re-enactments.

It is anchored by audio recordings made by Conigrave in 1993 for an oral history project conducted by the National Library during the height of the HIV/AIDS crisis. Bird and Sharpe were given access to the archives, which helped create a narrative for their film.

Remembering the Man also includes interviews with everyone from former schoolmates, who recount how love first bloomed between the aspiring actor and football captain, through to Conigrave’s fellow NIDA students and cast-mates, Caleo’s nurses and the pair’s long-time friends.

They help to paint an honest, intimate picture of the two men. One friend describes Conigrave and Caleo as “delightfully yin and yang” – one arty, adventurous and wild, the other more measured, studious and sporty.

Notably absent from the interviews, however, are the families of both men.

“We never saw it as a story about the families, but we asked the Conigraves to be interviewed … neither wanted to appear on camera but they have been supportive,” Bird says.

So, too, he says, have the Caleos, who provided photos and “helped with the truth” of the story.

Although John’s father, who disapproved of his relationship with Timothy, is not painted in a favourable light in the documentary, Bird defends him and his wife.

“Quite early on I met with them – that was difficult. We were making a documentary about their son who had died.

“I’ve got a soft spot for the Caleos; I think Tim treats them quite harshly in the book.

“They were there by John’s bedside right to the end … many people died alone at that time and John was surrounded by friends and family.”

Scene recreations are used sparingly in Remembering the Man, mostly to depict the pair’s relationship with their families and Caleo’s final moments. Actors are also used to present narrative from Soft Targets, a part-verbatim theatre project conducted from interviews with people with HIV/AIDS in 1986 which offers an insight into what their lives were like.

In their efforts to show the cruel impact of the epidemic, the filmmakers negotiated with families for permission to use photos of men suffering the final stages of AIDS-related illnesses before steroids were used for treatment.

Also interspersed through the documentary are clips of Australian anti-gay rallies from the same period in which placard-waving, megaphone-carrying protesters denounce “poofters” and “perverts”.

“It was really confronting,” Bird says of watching the archival protest footage.

“It wasn’t that long ago, and with the debates about same-sex relationships, I wanted to bring it to light.”

As well as shedding light on a significant time in Australia’s history, Bird says the story of Conigrave and Caleo resonates strongly with members of the gay community because it is essentially a universal one.

Remembering the Man will screen on October 18 and 22 at Palace Nova Cinemas as part of the Adelaide Film Festival, which opens on Thursday and continues until October 25.