Nigel Jamieson has mixed feelings about the fact that As The World Tipped is still touring the globe more than 10 years after it was first performed by England’s Wired Aerial Theatre.

Such longevity should be cause for celebration for a freelance theatre director, but in this case it also leaves him frustrated.

“I have mixed feelings because it’s about a kind of mad inaction that I would have hoped we would have sorted out many years ago, making the show redundant,” he says.

“I thought Paris [the Paris Climate Agreement] might make it irrelevant … but we live in a country where in the last year emissions have actually risen.”

To be presented nightly in Frome Park during WOMADelaide, As The World Tipped sees 12 performers from Wired Aerial Theatre portray harassed staff at the Secretariat of the Copenhagen Climate Change Conference who fail to notice as the world around them slides – both literally and metaphorically – towards disaster.

Central to the performance is a tipping stage, which slowly tilts until it is vertical, like a large cinema screen in the sky. The performers, attached by special rope, are eventually suspended around 25 metres above the audience in the night sky against a backdrop of dramatic imagery that makes it appear like they are hanging off the edge of a building, caught in a cyclone or being washed away by a huge wave of water.

“You’ve got people running around through all these images … they’re all projections but they’re very exact. It’s as if they’re actually in the film but they’re in front of the image and being manipulated up and down the screen and across the screen.” 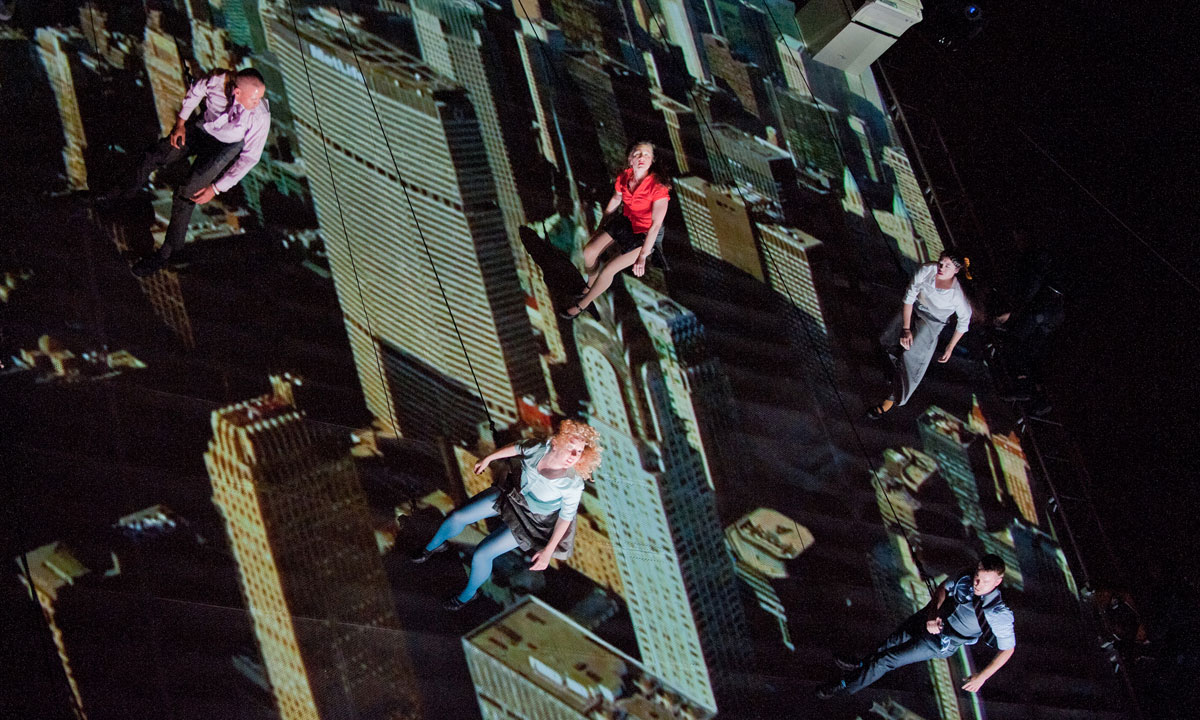 The thrill of watching acrobats perform up in the air is intensified by the political, social and emotional context of the show.

NSW-based Jamieson – who is also co-director of the Adelaide Festival show Buŋgul, the staging of Gurrumul Yunupingu’s final album – has created many outdoor spectacles, including for the 2000 Sydney Olympics. He says he first had the idea for As The World Tipped after attending a UK workshop which included companies that were exploring the use of aerial work to tackle themes rather than just for entertainment.

One of those companies was Wired Aerial Theatre, which later contacted him to discuss the concept of a stage that could hang up in the air off a crane to become a kind of wall.

“I thought if you could have it on the ground looking like a normal stage and then you could lift it up and tip it in the air, that would be an exciting thing to do,” Jamieson says.

“It was at the time of the Copenhagen Climate Change Conference and this new word ‘tipping point’, which we’ve kind of just discovered in Australia, was in the air … I thought maybe we should dramatise this really quite important moment in history and the world’s inability to move forward with things that matter most to its citizens.”

Jamieson has long been passionate about climate change, but says it has become more personal for him over the recent bushfire season.

The New South Wales bushfires roared through Yengo National Park just a month after he had sold a property there because it “no longer felt safe and habitable”. The location of his new home, near the Hawkesbury River, seemed safer, but the fires came frighteningly close to that, too.

“The entire mountainside opposite was on fire and the fire was jumping the river just upstream … we were continually meeting people who were living a good normal Aussie life, worrying about the mortgage and this and that and suddenly they’re sitting in the dark with no phone, no electricity, wondering if they had a candle from 10 years ago.”

While there is a kind of satirical humour to the mayhem shown in As The World Tipped, and a large sense of spectacle created by the aerial performance, Jamieson says it also has a powerful emotional pull he believes will be heightened following the recent bushfires.

“We hope you will remember those images forever – firstly, because you’ve never seen anything like it before, and secondly, because of the emotional content and how you respond to it.

“And it’s going to be a lot more emotional, in a sense, for a traumatised Australia. But I think we need to come together and think about how we will act. It comes with a very powerful message, and a positive message at the end.”

As The World Tipped will be presented nightly in Frome Park during WOMADelaide, which runs from March 6-9. See the full WOMADelaide line-up here.