Annette Tripodi – The Drummers of Burundi, 1999 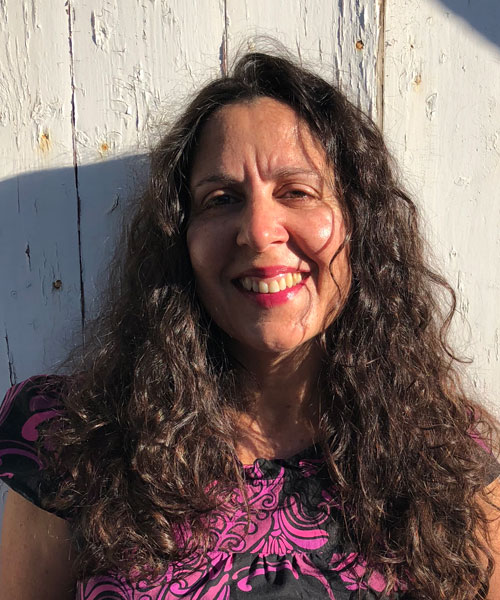 WOMADelaide operations and program manager since 2008, Annette’s involvement with the festival began as an audience member in 1993. Her favourite moment comes from her first year as artist liaison officer.

I was excited about meeting the artists but, this being my first festival, I wasn’t sure how it all worked and was nervous about things running smoothly.

The Drummers (AKA Master/Royal Drummers) of Burundi had existed for hundreds of years; their drumming technique had been passed down from father to son in particular families. Some of the members of the ensemble had performed overseas before but, for quite a few of them, the tour to WOMADelaide, Sydney and Melbourne (a double bill with Baaba Maal) and WOMAD NZ was a big deal, and a first. After all, the drummers were mostly farmers, shopkeepers, mechanics, etc.

The 12 men were coming from a village of fewer than 1000 people in central Burundi. They had to travel a few hours by road to Bujumbura then fly to Joburg, Perth and Adelaide, with about 250kg of drums, drumsticks and a spare cowskin or two. I’d heard that they were Hutu and that, over time, a number of them had been killed in ethnic warfare. I’d heard that Joni Mitchell and the Beastie Boys had sampled their rhythms in their music, and that Malcolm McLaren was a fan.

I’d listened to a CD (no YouTube back then!). But I really had no idea what to expect.

They arrived safely and I met their manager of 25 years, Gabriel Ntagabo, who was also with the Ministry of Culture at the time. He was such a warm, unassuming and humble man. We stood together backstage with the group, who dressed in the colours of their flag, with these huge drums balanced sideways on their heads.

One after the other, they mounted the steps to the stage, drumsticks and arms flying, stopping to set down the drums in a semi-circle. In a moment, with a few vocal chants, this unbelievably loud, primal, pounding rhythm began and I was just … emotionally overwhelmed.

I burst into tears. I don’t know if it was relief, happiness, their back-story, their long journey, or seeing the faces in the audience experiencing – just as I was – some kind of shock, awe and delight at the mighty power of the group.

Accompanied by these impressive, acrobatic leaps high off the ground, the energy and thunder did not let up for the entire set. It was thrilling and exhilarating and, to be honest, it’s still the feeling that I get, years later, when the festival is on.

I went on the road with them again later in 1999 to the Queensland Music Festival (to work with Indigenous artists in Mackay, of all places) and The Metro, Sydney.  We brought them back again for WOMADelaide and WOMAD NZ 2012. Gabriel and I maintained a lovely friendship, during which he occasionally sent me a postcard and always referred to me as “sister”. 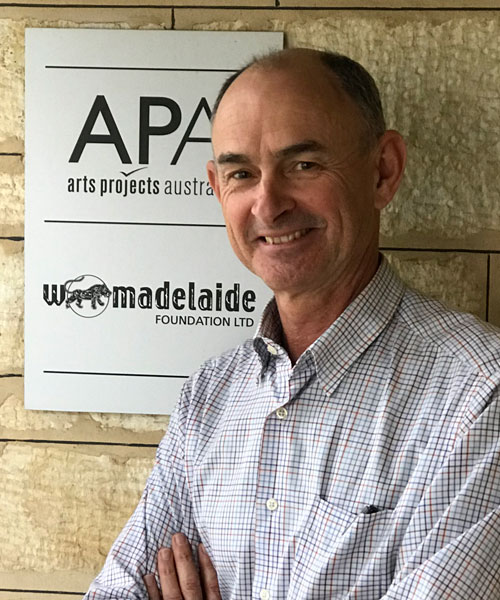 The co-founder and director of Arts Projects Australia (APA), Ian has also been director of WOMADelaide since the first event in 1992.

In 2005 the program featured a special collaboration between Lo’Jo, the French band with folk, gypsy and North African influences, and French fire artists Carabosse, who had presented their first installation at the festival in the previous year.

Lo’Jo performed something of an extended set from within the depth of giant Morton bay figs lit with hundreds of small candles and oil lamps – while beyond this special space there were the more extensive fire-candle sculptures placed by Carabosse through an area of the festival site.

Like a giant campfire gathering the audience into its flickering glow, it drew people to the music and, of course, the lure and warmth of the candlelight. Looking at the faces of the crowd, you could see people were beaming with a childlike wonder and sheer sense of enjoyment. I particularly remember one euphoric patron with their glass of wine in hand saying: “It doesn’t get much better than this.” 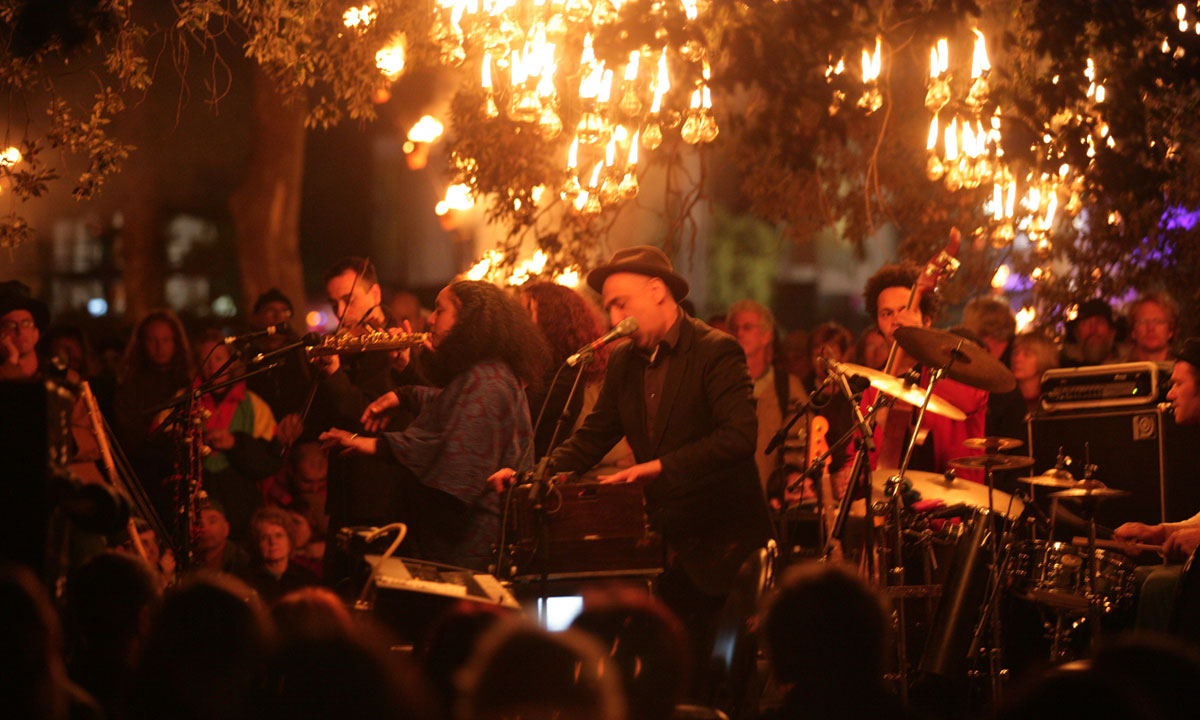 A special delight of WOMADelaide is the extent to which audiences embrace new sounds, music and experiences, and the enjoyment and sense of enrichment is palpable – as it was on that evening – when everything, including the park itself, makes such memories possible.

In 2020, Carabosse will be returning the week following WOMADelaide with their Adelaide Festival installation Fire Gardens in the Adelaide Botanic Garden, where they will have different musical collaborators. I feel sure that the spirit and force of those amazing nights at WOMADelaide in 2005 will echo through the gardens to entrance audiences all over again. 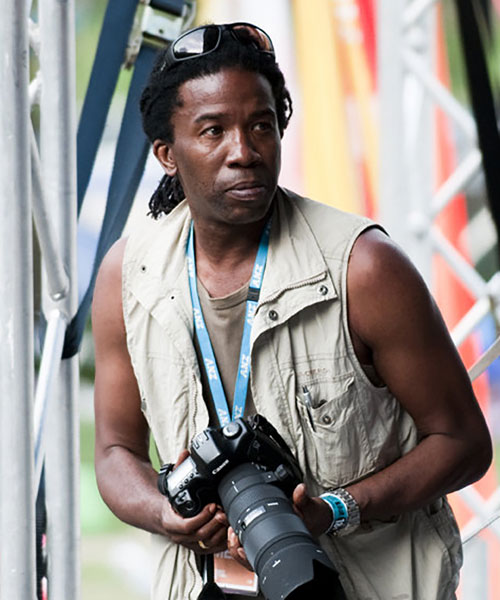 Photographer Leonard Choice, of MyBESTOF Photography, has attended almost every WOMADelaide festival since 2007.

I was making my way from Stage 1 and had intended to view another performance at The Zoo stage when I heard this wonderful voice and immediately changed direction towards Stage 2. As I rounded the corner, I was struck by a stage populated by a chorus of singers and an ensemble of musicians all conducted with exquisite balance and timing.

I was transfixed by this unity of performing elements. In the centre of this wonderful blending was Jane Siberry (I knew nothing of her or the Tutti Ensemble at that time). My instincts said, “stay where you are, don’t move, draw closer, this is something very, very special”.

Soon after I had stopped, they began to sing a song that washed over and through my entire body and soul. It was “Calling All Angels”. Even while I write this I am still affected by the spirit of the performance and narrative content. 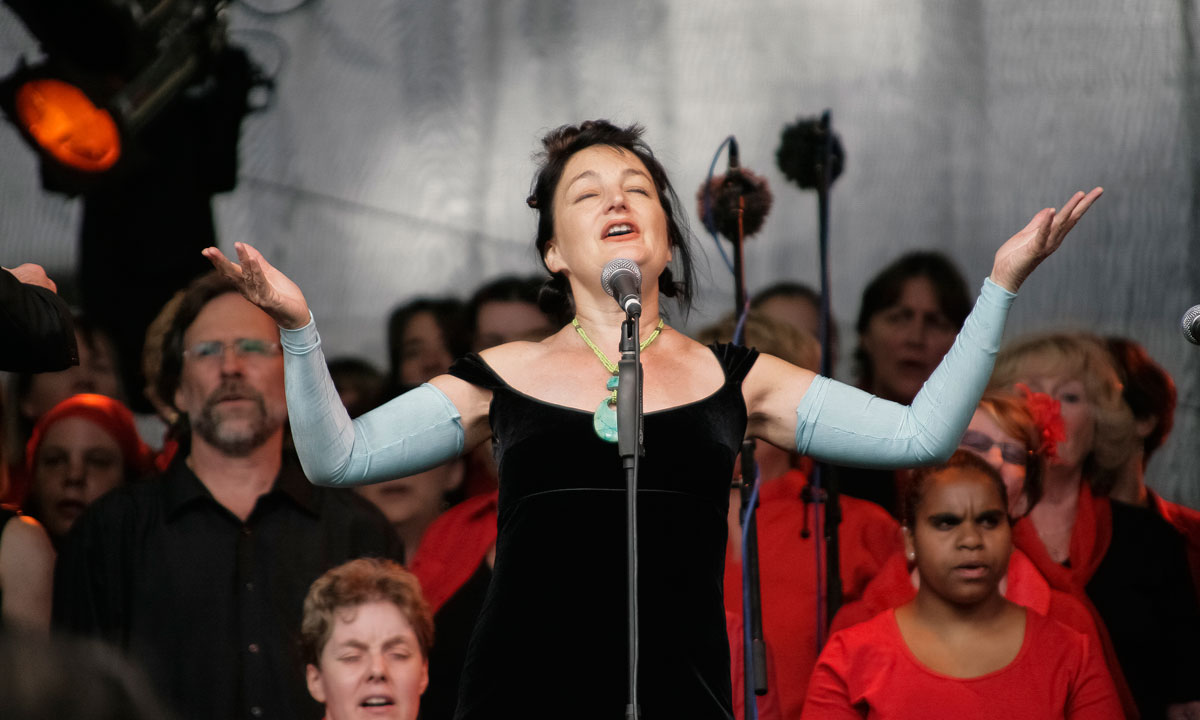 I took photos motivated by the sheer joy of what was before me and also because of my memories and profound love of my sister Pamela. Pamela would be described as a “special needs person”. She had suffered an acquired brain injury as a young child. After that, she suffered grand mal seizures for most of her life. For all her difficulties, Pamela retained a majesty and inner strength and sweetness in her bearing and character. She loved singing and she had a beautiful, strong and passionate voice when she sang.

This chance encounter at WOMADelaide will remain with me always and further defines what it can mean to attend a truly glorious curation of creativity, performance, discussion and thought.