This Australian documentary is breathtaking not just for its beautiful cinematography but also for its portrayal of human greed, selfishness and the desire to conquer.

Director Jennifer Peedom, who was unable to attend yesterday’s Adelaide Film Festival screening because she was in London accepting the British Film Institute Award for Best Documentary, started out seeking to tell the story of the Sherpas who risk their lives to help international climbers reach the Everest summit.

But when tragedy struck during filming in April last year, with 16 Sherpas killed by an avalanche on the notorious Khumbu Icefall, the documentary took a different turn.

Grief and anger saw the Sherpas unite to demand an end to the 2014 climbing season, greater compensation for the victims’ families, and improved safety and conditions for the often-overlooked, exploited and patronised workers.

To some Westerners, the rebellion seemed out of character for the “happy, smiley Sherpas” epitomised by Tenzing Norgay, who became famous when he summited Everest in 1953 with New Zealander Edmund Hillary.

But there had been signs of discontent the previous year, when a brawl broke out 21,000 feet up the mountain after a Westerner swore at one of the Sherpas. After several decades of being treated like second-class citizens on the mountain and taking most of the risk for none of the glory, was it any wonder they were angry?

In Peedom’s film, the Sherpas – often overlooked in other accounts and feature films such as the recently released Hollywood blockbuster Everest – are front and centre from the beginning.

Audiences get an insight into their home life through Phurba Tashi Sherpa, an experienced climber leading a team of Sherpas for international expedition organiser Russell Brice (pictured below). If the 2014 expedition had been successful, Phurba would have made his 22nd summit and created a new world record, but his fearful family desperately want him to stop climbing.

Unlike the hundreds of Western climbers who seek to conquer Everest every year, creating traffic-jam like queues at key points on the mountain, the ethnic Sherpa view it as a holy place, making spiritual offerings before each assent.

The contrast shown between the gentle, quietly spoken Sherpas and the wealthy, single-minded foreign climbers could not be starker. The logistical exercise required to ensure the safety and comfort of the expeditions for which climbers pay up to $100,000 is astonishing – Sherpas carry packs and gear two or three times their own body size up the treacherous mountain, so clients can recline on deck chairs at base camp and be woken in their tents with a hot facecloth and coffee.

While the international climbers seeking to summit the mountain from the south side must pass the Khumbu Icefall only twice (once on the way up and once on the way down), the Sherpas must do it 20 or 30 times as they establish the camps further up the mountain, multiplying the risk of injury or death. 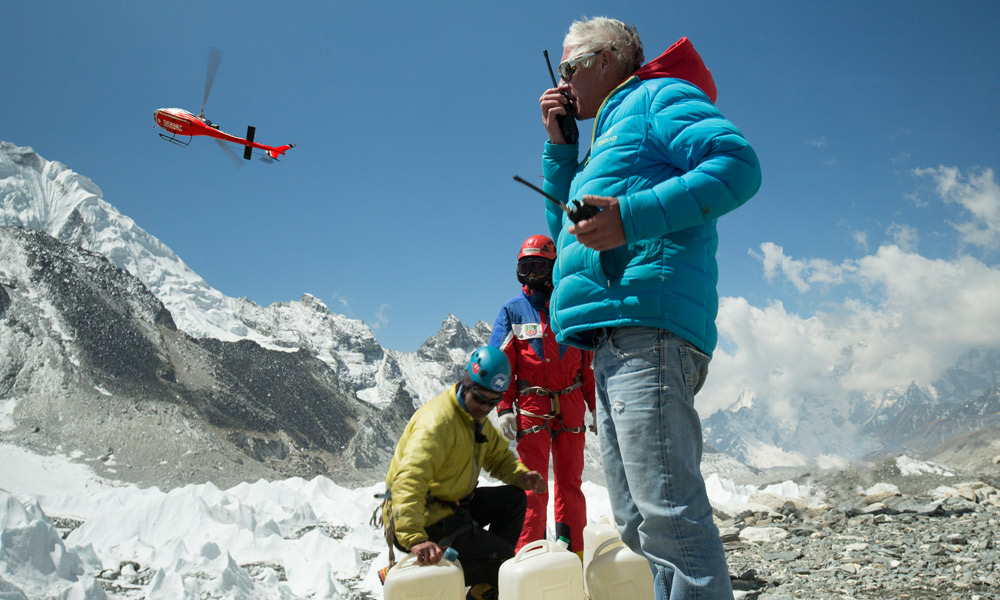 Interviews with the mountain guides, sherpas and climbers, as well as the sons and daughter of Sherpa Tenzing Norgay, show different perspectives on Everest and the mountaineering expeditions, while stunning cinematography highlights the power and beauty of the mountain. Time-lapse photography is employed effectively to reveal the ever-changing snow and icescapes, with clever use of close-up shots accentuating the danger for climbers.

When the Sherpa tragedy occurs, audiences are given a confronting insight into human character and the nature of the relationship between the Sherpas, the international climbers, the expedition companies and the Nepalese Government. If you have any doubts as to whose side you are on, they are put to rest when one particularly unpleasant, brash American climber goes so far as to liken the “rebel” Sherpas to terrorists.

Sherpa will screen again on Saturday, October 24, at Palace Nova Cinemas as part of the Adelaide Film Festival.