The short stories in Emma Ashmere’s Dreams They Forgot are not bound by any one country or era. However, each privileges a feminist perspective that forms an ideological framework for the collection. These are stories that reiterate and reinforce one another, and the reader may find them more meaningful when read in context rather than in isolation.

There is a motif that recurs throughout the book: the introverted, uncertain female protagonist positioned against her worldly counterpart. Awe frequently morphs into unrequited desire, as in the opening story “The Winter Months”, where the unnamed narrator’s friend and fellow TEFL teacher leaves and the narrator thinks: “Even though I know she won’t be there, I cross the street and call her name into the electric hum of the intercom.” Later, in “Caving”, the narrator observes her employer’s daughter: “… I could feel her breath on my face. I stared down at her legs. Long, smooth and gently muscled, toned by endless tennis parties…”.

The dynamic reveals a gulf in a character’s perception of reality, and what emerges is a host of protagonists unable to cast themselves at the centre of their own narratives. Instead, they perceive themselves as the “other” – the outsider looking in – choosing to remain in orbit of the objects of their admiration. 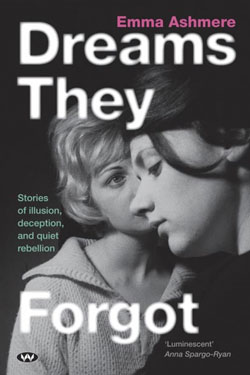 Ashmere is a sparse storyteller – the information she withholds is as important as what she chooses to reveal. However, the brevity of these stories (each is around 10 pages long, with a few as short as two pages) lends them a didacticism that can leave the reader adrift. In the vignette “The Historic Present”, a woman trawls through the Melbourne State Library archives, reading about the myriad plights that women faced in the nineteenth and twentieth centuries. The final clipping reads, in part: “three unidentified females found frozen to death … They were mistaken for heaps of rags.” The title encourages a parabolic reading, and the absence of narrative means the story hinges entirely on its moral value – a truism, which carries little weight.

The more socially-engaged narratives often strive to impart a message, which can come at the cost of nuanced character and plot. The more powerful stories resist cliché and closure, such as the arresting “A Thousand Eyes”, which follows a precocious narrator living under the paranoid rule of her agoraphobic father. It describes the complex aftermath of grief without describing the grief itself, and is the most successful story in the collection, due in large part to the fact it refuses any singular interpretation.

Ashmere has a keen eye for detail; her imagery is the book’s greatest asset. In “Nightfall”, a peach is “a ball of sun in her glove”, and in “Standing Up Lying Down” the narrator, in hospital, lies on the “white plastic tongue of a sliding bed”. However, there is also a tendency for symbolic and imagistic endings, which can lead to neat resolutions that feel disproportionately earnest, particularly when the final image strives to be profound.

Alone, Ashmere’s atmospheric language is not always enough to sustain a reader’s interest, and the language redeems, rather than reinforces, a number of these stories. The book succeeds where it resists exposition – when the narrative eclipses its messaging, and the latter rather than the former is veiled in ambiguity.

Emma Ashmere’s Dreams They Forgot is published by Wakefield Press. InDaily previously published an extract from the book here.

Mindy Gill is the recipient of the Queensland Premier’s Young Writers and Publishers Award and the Australian Poetry/NAHR Eco-Poetry Fellowship. Her criticism has most recently appeared in Australian Book Review and Sydney Review of Books.

A Year in Review is an initiative by Writers SA, with assistance from the Australia Council of the Arts, to produce a series of book reviews published in InDaily over the next 12 months.