I love a good book about writers, or writing – and over the past month, I’ve devoured a few of them.

One was Tegan Bennett Daylight’s wonderfully engaging The Details: On Love, Death and Reading (Simon & Schuster, $26.99), a collection of essays about a life shaped and experienced through books and reading – and writing. Bennett Daylight writes poignantly about losing her mother, who “used books as a form of communication” and would routinely respond to the ubiquitous childhood wail of I’m bored by presenting a pile of books. (My own mother would offer a list of potential chores – which I adopted as a very successful tactic for dealing with my son’s boredom.) 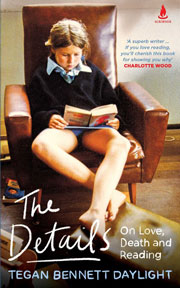 Bennett Daylight writes that her mother taught her to notice the details, in life and books. This ability to weave a narrative through sharply observed details is also what entranced Bennett Daylight when she first read Helen Garner’s Monkey Grip. “Hers were the first books I read with what felt like a writer’s mind”, she writes, and she describes noticing how they were put together, and imagining how she might do the same.

The Details ranges from deep engagement with admired writers like Garner, George Saunders and SJ Perelman, to reflections on how the transformation of students into customers has changed the study and teaching of creative writing; the changing way teenagers are reflected through and engage with books, from Catcher in the Rye to The Hunger Games; and remembering her writerly friendship with Georgia Blain, who was diagnosed with the brain tumour that killed her soon after writing a novel in which her main character was dying of a brain tumour.

“The words of great writers somehow vivify experience – in borrowing them to describe our own lives we’re amplifying what we’ve seen or felt or heard,” writes Bennett Daylight. And her book does something like this for us.

I picked up Lily King’s Writers and Lovers (Picador, $29.99) partly because it’s endorsed by Tessa Hadley, whose complex, deliciously detailed novel about how friendships and relationships shift and change over time, set in London’s art scene, Late in the Day (Vintage, $19.99), was one of my favourite books last year. 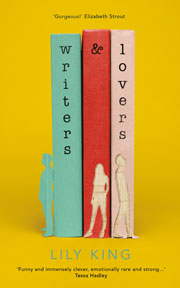 Casey is a 31-year-old writer who works double shifts as a waitress to pay off a crippling student debt and lives in a (barely) converted potting shed she rents cheaply from a friend of her brother. Most of the friends who were writers with her have moved on to jobs that pay mortgages, but she’s in the final throes of a novel she’s laboured over for years. Her mother has died, and she’s marinating in grief, while also mourning an affair at a writer’s colony that ended with her residency.

Now, Casey is barrelling towards completion of the book, while battling money problems, loneliness and sexual harassment at work – and deciding between two men, both writers. One is a sexy, charismatic oddball student, Silas, who (in a shitty move) evaporates with apologies before their first date because he needs time, but on the plus side, is authentically interested in who she intrinsically is. The other is Oscar, a famous older writer who has two young boys and is grieving his dead wife (and coincidentally tutors Silas); he’s cautiously emotionally available and offers material comfort, but never asks Casey about her work and sets the terms of the relationship. “I should have wanted to be him, not sleep with him,” Casey reflects, in a moment that captures the age-old, uncomfortable gender dynamics embedded in the relationship.

King is a sharp observer of human detail and dynamics, with a bone-dry wit. This novel is sad, funny, despairing and inspiring all at once. It’s both a true and beautiful portrayal of grief, and a marvellous portrait of the realities of an artistic life for anyone without financial backing, and the trade-offs and sacrifices it entails – the emotional and physical exhaustion of everyday precarity.

Writers and Lovers is also a novel about loneliness and connection. Casey’s romantic quandaries are central to the book, but never eclipse its true romance: her relationship with her novel-in-progress. In one scene, she’s describing a favourite book (Woodcutters, by Thomas Bernhard). “It’s really a book about art and becoming an artist and all the ways it ruins people.” Yes – though this book also balances the ruin with the rewards of creation.

Another book that could be described this way is Australian Jessie Tu’s astonishingly good debut, A Lonely Girl is a Dangerous Thing (Allen & Unwin, $29.99), about Jena, a former child prodigy violinist who had a breakdown onstage at 15 and, in her early 20s, is slowly building her career again. 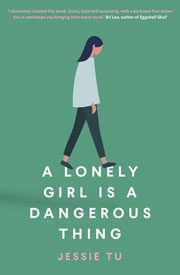 Since her breakdown, Jena has thrown herself into sex as she once did her music. The novel opens with bad sex in a closet at a funeral that she is due to perform at, and the first chapter closes with a reflection on the connection between her sexual appetite and her music. “My grandpapa was a child prodigy, too. He believed talent chose people. He said it was his destiny to suffer. To pursue great art. He had needs. They were excessive. That’s what he used to say. He said it all the time.”

Jena’s drive is about both answering a need for validation and pleasurable physical sensation; Tu pulls off the difficult task of casting the former as dangerous and the latter as joyful and unashamed, often colouring the same sexual encounters with both tones.

There was a lot I loved about this book, but especially the way Tu (who trained as a classical violinist for 15 years) explores being an artist – and a high-achieving artist, in particular. The work involved in honing your craft, the way it seeps into your daily life – long hours of practice, finding a way to work at it in any idle moment, even if in your head. And the nurture versus nature element of being a child prodigy: how much is due to inherent talent, drive, or psychology – and how much is it about the focus and resources funnelled into developing that talent? And once you’ve been shaped in that way, how does it affect the rest of your life?

Tu deftly explores the way the violin is intrinsically woven into Jena’s life, and how her early fame and great talent have shaped her, in ways destructive and rewarding.

Luke Horton’s debut novel The Fogging (Scribe, $29.99) is not strictly about writing and reading, but it does inhabit characters who are constantly reading, and thinking about what they read and how they will process it for their own writing. We follow Tom and Clara, a Melbourne academic couple in their early 30s, through a Bali holiday that presses pause on a life together that they seem to have fallen into more from familiar comfort than conscious choice. 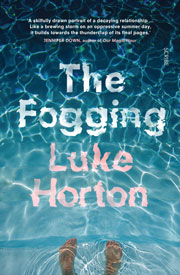 Narrator Tom suffers from acute anxiety. His panic attack on the plane in the opening pages, which he attempts to hide from Clara, turns out to be emblematic of the way they relate: he never talks about his anxiety in anything other than a surface way, even as he withdraws to working from home and barely socialising. Meanwhile, she periodically stops talking to him rather than communicating – and once the period has passed, they never talk about it.

Clara remains largely opaque to the reader, as we observe her through Tom’s incurious perspective, but we slowly sense that what he experiences as comfort is perhaps stifling for her – particularly when they befriend a couple at the hotel who elicit a new exuberance from Clara, and draw a reluctant Tom back into the world … perhaps too late.

Horton’s observational prose is crisp and evocative, evoking both compassion for and frustration with its blinkered narrator. This is a devastating exploration of a relationship that seems solid until close inspection reveals a plethora of hairline cracks, spawned by unquestioning inattention and a persistent assumption that everything will somehow work out.