Comedian, writer and actress Nina Oyama will be familiar to fans of the ABC’s government satire Utopia, in which she plays the over-eager office manager – AKA “Chief Happiness Officer” – of the fictional Nation Building Authority. She’s also appeared in other TV shows, including dancing as a possum on music program The Set, but for this Fringe comedy show she says she’s just “doing me”: “It’s a new character I’m working on. Just kidding. It’s just me!” Oyama was nominated for the Best Newcomer award at last year’s Melbourne International Comedy Festival. – Garden of Unearthly Delights, until March 1 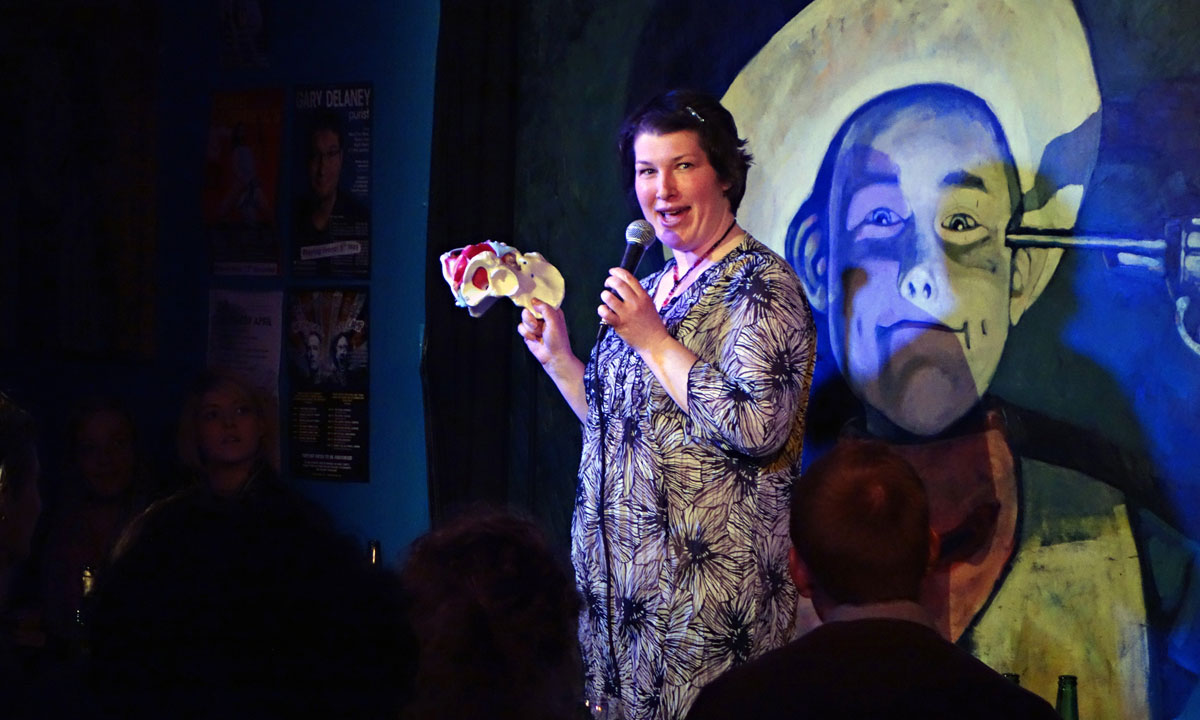 The hashtag #LaughDon’tLeak! says it all, really. Elaine Miller is a Scottish pelvic physiotherapist who has turned a pretty unfunny problem into comedy show that has sold out at the Edinburgh Fringe and in Ireland, Canada and New Zealand. She is so passionate about breaking taboos regarding incontinence and pelvic health that she even dressed as a vulva to address the Scottish Government. “There are few shows in the Fringe that can improve your orgasms and stop you weeing yourself,” wrote Europe’s Diva Magazine. Amen to that. – Gluttony, until February 23

Holmes, whose list of credits includes performing the lead in The Book of Mormon and working as a writer on South Park, is making his debut at Adelaide Fringe with a one-man show that sold out in Edinburgh last year. Yeah, But Not Right Now melds stand-up, storytelling and songs, with Holmes “flagrantly displaying his very funny (and oftentimes cringeworthy) struggle to finally grow up, whilst battling an epic internal war between a f∗∗∗boi and a saint”. Awarding it five stars, Edinburgh Festivals Magazine declared it a hilarious performance and “a must-see for even the biggest musical theatre sceptics”. – Gluttony, until March 15

“A vaudevillian-style, one-woman celebration of female fools. Also, Abby may juggle (unconfirmed).” That’s the pitch for Kiwi comedian Abby Howells’ Fringe show HarleQueen, which promises a history-meets-hilarity journey celebrating the women who blazed a trail for their sisters in comedy. Howells has a string of awards under her belt, including winning the Adelaide Tour Ready Award at the 2019 New Zealand Fringe. We’re also won over by the titles of her previous productions, which include 28 Days: A Period Piece and Benedict Cumberbatch Must Die. – The Breakout at The Mill, March 3-8

Self-described “Glaswegian comedian and vagina dodger” Larry Dean isn’t an Adelaide Fringe virgin and he’s not new to the comedy scene, but he’s not as well known here as he is in his native Scotland. His style is described as “a perfect mix of smarts and smut”, with his 2019 Melbourne International Comedy Festival show earning a 4.5-star review in The Daily Review. Dean also comes highly recommended by InDaily journalist Jess Bassano, who has watched every clip available: “Dean has shown himself to be crazy quick while balancing the fine line between tragedy and comedy with all the skills of a more seasoned comic,” she says. – Garden of Unearthly Delights, March 2-15

You should have heard of Steph Tisdell – she won the Deadly Funny National Grand Final in 2014, has toured with the Aboriginal All Stars and debuted her first solo show at Adelaide Fringe in 2018 – but we’re doing you a favour and including her here just in case. Baby Beryl is described as an “interactive and surreal show where stand-up meets chat show”, with Tisdell examining baby naming trends and pondering some of life’s biggest mysteries, dissecting the human condition and “trying to find a baby Beryl”. She’s performing solo in the Garden of Unearthly Delights from February 18 until March 1, and also with the Aboriginal Comedy All Stars across the same dates. You can catch more deadly comedy at the Tandanya National Aboriginal Cultural Institute, which is presenting Aborigi-LOL (with Matt Ford and Dane Simpson) and Kevin Kropinyeri Goes Talkabout.