“It’s part show and part bar, and it is very much inspired by the magic bars you’ll find dotted all over Japan,” co-director Kirsten Siddle tells InDaily of the 60-minute show Maho Magic Bar, which will debut in the Garden of Unearthly Delights during Adelaide Fringe.

“This style of entertainment… we just don’t know it here in Australia.”

Japan’s relationship to magic is centuries-old. It stretches back to the Edo Period, when traditional tezuma artists began fusing storytelling and illusion, and kabuki performers employed impossibly quick mask changes.

Around the 1980s, traditional styles merged with Western magic modes, such as card tricks and table magic, to result in a new experience: magic bars.

“In the nightlife capitals of Japan, you’ll find dotted around these just wonderful little bars where you can relax and have a drink and chat, and a whole series of extraordinary magicians will come to your table and entertain you,” says Siddle.

“Tokyo alone, I’m hazarding a guess, could have in excess of 30 to 40 magic bars dotted around the various nightlife spots.

“In Japan they’re fairly small places and our venue is relatively large by comparison.”

The Maho Magic Bar is being created from two shipping containers and will seat around 30 people per show.

Siddle and her co-director Danielle Harvey are both experienced arts curators and producers, with their Broad Encounters production company previously presenting the award-winning immersive theatre work A Midnight Visit, which was inspired by the world of Edgar Allan Poe.

For the exterior of their Maho Magic Bar, the pair drew on the aesthetics of Osaka and Tokyo’s nightlife districts. It will be a “riot of neon” punctuated by Japanese iconography such as waving cats and koi fish, accompanied by hanging beverage paraphernalia.

We wanted to bring a little bit of Japan’s crazy, cool wonder to Australia

The interior of the cocktail bar will include wooden bar tops and a ceiling feature of Japan’s national flower, the cherry blossom.

Tables under lantern-light will be visited by a roster of magicians sourced from some of Japan’s most distinguished magic bars.

“They’re fabulous and they’re a great mix of personalities and skills as well,” Siddle says of the magicians, who will use props such as lollipops, balloons and toy pandas to entertain their audiences.

“The magicians are based mostly in Tokyo and some in Osaka, but they’re all flying into Adelaide and they’ve been working away at things since October last year.

Meet magician @shohgo.magic! He's sending you this message from all the way from his home country of Japan, and can't wait to see you all when he arrives for @adlfringe next month. He also sends a message of support to anyone affected by the terrible bushfires x • • • @thegardenofud #mahomagicbar #mahomagicbar #magicshow

Adventurous patrons can order off the “surprise menu”.

“There’s a couple of special magic moments that you can elect for… you don’t know what you’re going to get but they’re all sensational and major lifts in terms of the show and something quite quirky,” Siddle says.

“The Japanese have a really wicked sense of humour and these are really playing on those.”

Patrons are expected to buy one drink upon entry from a drinks menu which includes a range of Japanese spirits, such as premium sake (fermented rice wine), shochu (grain liquor), whisky and gin.

Although the cocktail menu hasn’t been finalised, it will be based on those spirits, with non-alcoholic drinks also available. 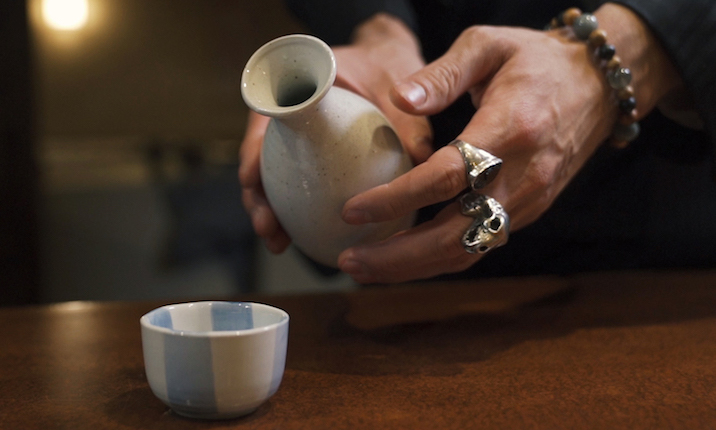 Maho Magic Bar will serve a range of Japanese drinks, including sake.

Siddle is particularly excited about the saketini cocktail, but even more so about transplanting something from her travels to Adelaide Fringe audiences.

“We wanted to bring a little bit of Japan’s crazy, cool wonder to Australia and give audiences an experience unlike they have ever experienced before.

“Those looking for a new way to discover entertainment will be enchanted, and those looking to engage with extreme skills will be astonished.”

Maho Magic Bar is a ticketed event and will be running at the Garden of Unearthly Delights in Rundle Park from February 14 to March 15 as part of the Adelaide Fringe.