Gluttony owner Daniel Michael acknowledges the building work has created challenges by encroaching on parkland that previously housed one of the hub’s biggest venues, The Peacock, which this year hosted two of its top-selling shows: circus act Luminous and mentalist Matt Tarrant.

However, he has negotiated with the government to use alternative areas of the park, which will see Gluttony’s total capacity increase from 2800 people in 2016 to 3800 in 2017. The number of ticketed seats will rise from 1400 to 1900, and it will host an additional 10 shows.

“A big chunk of our site is a construction zone now but because of that we made the point fairly strongly that it was essential that we got more space, otherwise we wouldn’t be able to house the sort of acts that we had,” Michael says.

In 2017, The Peacock will be located on the Hutt Street side of the park, with the two halves of the Gluttony site to be linked by a walkway – “a fenced 5-metre tunnel, essentially”.

The Peacock itself will be a bigger tent, able to seat 550 people compared with 330 previously. This has helped Gluttony secure two big shows – Barbu and Soap – that were previously in the Royal Croquet Club, as well as Cabaret Festival act Starman, which is inspired by the music of David Bowie.

“The Peacock has a bigger seating capacity, bigger stage – Barbu and Soap require a huge production build, which we couldn’t have facilitated in any of the venues we had in previous years,” Michael says.

Another additional pocket of parklands secured for next year has meant it can add an extra venue, bringing the total number to eight.

“The new one is the Spiegel Zelt, which we’re referring to as the baby Spiegeltent because it’s very small – it’s only a 160-seater,” Michael says.

“It’s an original antique number that’s over 100 years old… it’s owned by a guy in Gippsland who bought it from Belgium.” 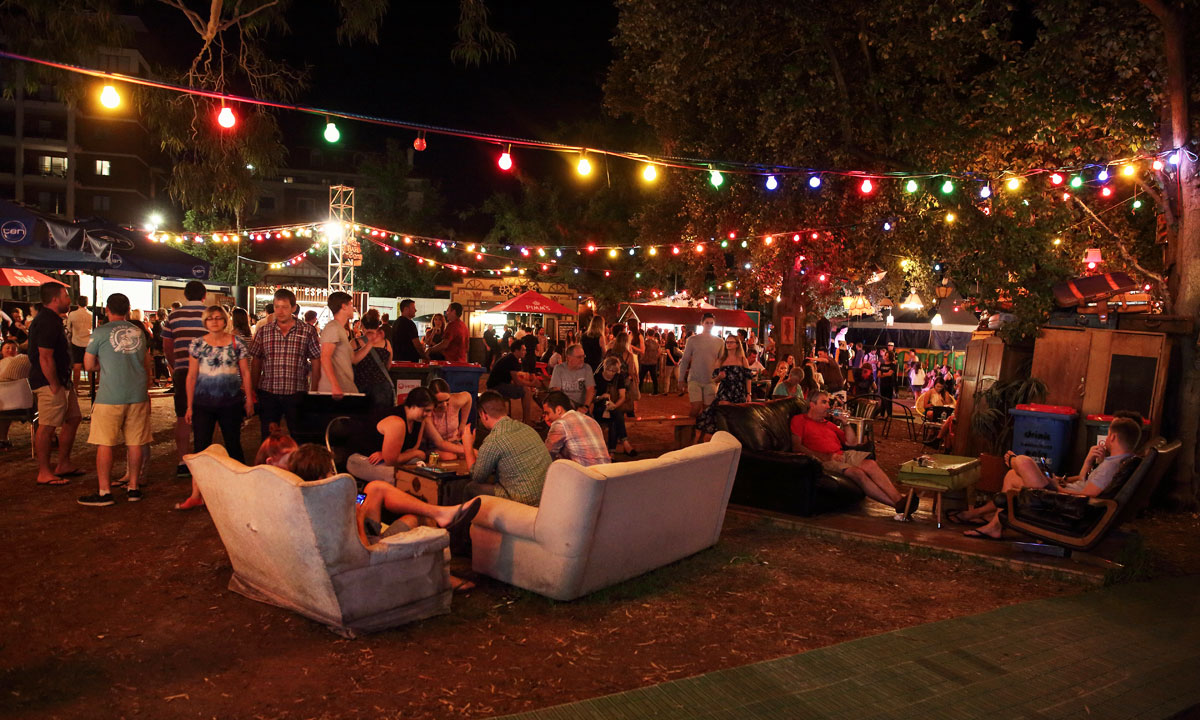 A new designer is being brought on board, but Gluttony will retain its vintage vibe. Photo: Adam Davies

The Gluttony entrance will remain at the corner of East Terrace and Rundle Street, but is likely to look a little different. For the first time, a designer, Cassie Sibbin, is being hired to give the site a more cohesive appearance, although it will retain which Michael describes as its “art deco vintage vibe”.

He admits there will likely be areas where Fringe-goers can still see the adjacent construction work, adding “we’ll do our best to keep it to a minimum and at night they won’t see anything”.

“We have to make a lot more effort, but when things change you have to be able to find the opportunity in that change.

“One of those opportunities is the bigger venue, but there’s also a beautiful lake [in the additional space it has secured] … so we’ll be able to have this beautiful bar area where you can look over the lake.

“It’ll be a great little space for people just to be able to chill out of an evening and have a drink.”