The beginning of Aleppo. A Portrait of Absence is unsettling. Ushered into a large and almost empty section of the Queen’s Theatre, a small clutch of audience members is left to awkwardly contemplate each other and an enormous map of the Syrian city Aleppo.

The discomfort only increases when it becomes clear that passivity is not an option. From the map each person must choose a wooden puzzle piece, and then accept that the rest of their experience will be determined by the slice of the city to which they have now voluntarily bound themselves.

Eventually, this choice will lead every person in the audience to be seated at separate tables at which, in the dark, performers will join them. As the lights come up – but only a little – each actor begins to tell their partner a story.

This is theatre at both its most extreme and fundamental. 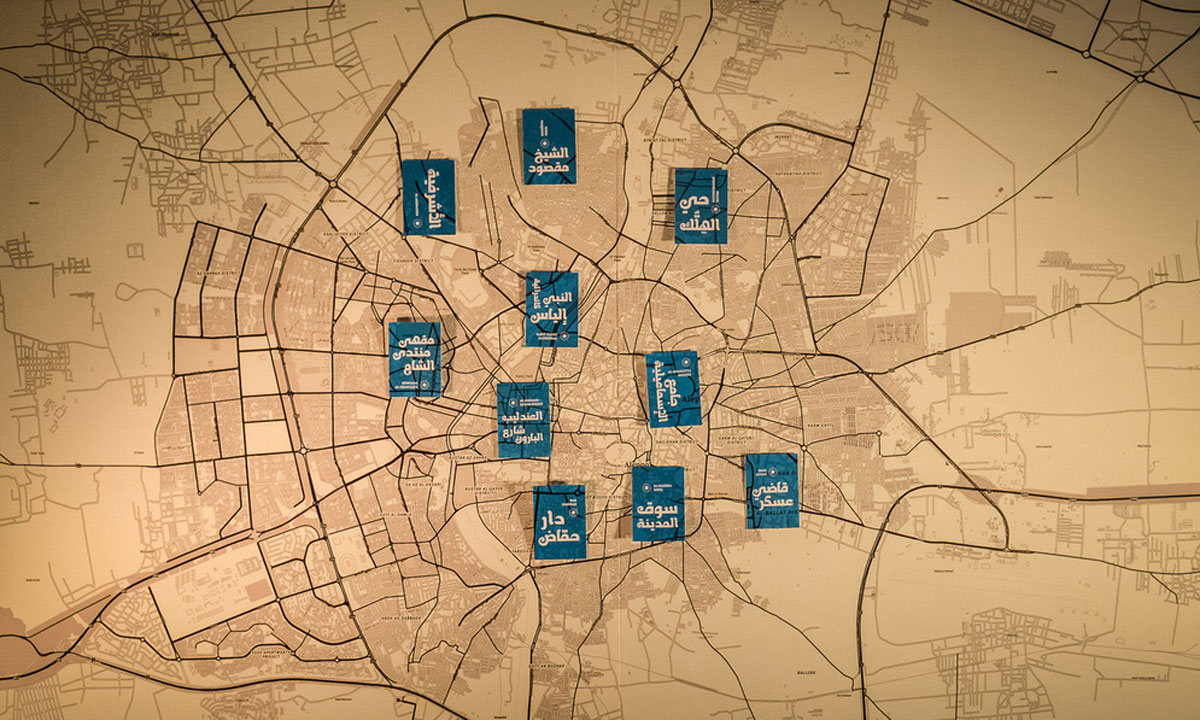 The power of live performance is its immediacy. The suspension of disbelief most viewers automatically adopt when watching something on-screen is muddled in theatre by the presence of real people on stage. This can make it difficult for occasional theatregoers to adjust; sometimes the pretence of action can feel too much like pretending. But this incomplete suspension of disbelief is also the wellspring from which theatre’s power flows. When handled by talented performers and creators, it becomes something much more potent; it becomes belief.

The creative team behind Aleppo. A Portrait of Absence – writer Mohammad Al Attar, director Omar Abusaada, and scenographer Bissane Al Charif – carefully and expertly herd their audience toward moments when they are able to believe. The intimacy and simplicity of the one-on-one storytelling set-up removes potential obstacles like staging and clunky dialogue. What is left behind is the innate human desire to connect and understand.

Having engineered such a powerful situation, Aleppo’s creators use it to conjure a vivid picture of the city through the eyes of its people.

At the tables, each actor performs a monologue based on interviews conducted with former residents of Aleppo. While every audience member’s experience is different, all the stories are crafted with the same intent – they re-enliven destroyed parts of the city by describing the special connection individuals had with their home.

For this Adelaide Festival version of the show, the cast is local. Every audience member will only connect with a single performer and can’t have an opinion on the rest of the ensemble, but the rendition offered by veteran Adelaide actor Nathan O’Keefe is highly generous. His ability to create an intimate ease is essential; without it the story he tells would be rendered powerless.

Much has to align to make Aleppo. A Portrait of Absence effective, but its creators are confident – not just in themselves, but in their actors, and in the openness of their audience. Their confidence is justified – the result is a radical act of remembrance that rebuilds a lost city through the act of sharing.

Aleppo. A Portrait of Absence is showing at Queen’s Theatre until March 15.