The entertainment value of watching a man balance rocks may be difficult for some to grasp, but video clips of Nick Steur in action help explain why Freeze! is so compelling.

His audience seems spellbound as the most awkward-shaped pieces of stone are placed in positions that defy gravity, and the overall feeling of the performance has a meditative, hypnotic quality.

“I found it a completely captivating hour where I could not take my eyes off him and what he was doing,” Adelaide Festival co-artistic director Rachel Healy has said of Freeze!.

“There’s these moments when it comes together and it’s like watching magic happen.”

Steur says he started balancing pebbles when he was about five years old, and rediscovered the enjoyment it brought while in his final year studying performance art. In need of a break and some renewed inspiration and energy, he went to the beach and started putting rocks on top of each other.

“What I did was try and balance the stones higher and higher, or in more and more difficult ways,” he says. “I became obsessed with it for three days.

“At one point, and I didn’t realise this because I was concentrating on the pebbles, I had gathered an audience around me. That made me think that it was maybe a good idea to bring it together as a live art performance.”

He realised it was a way to communicate with an audience not by showing something that is rehearsed, but by sharing his experiment.

Since then, Steur has presented Freeze! in many unusual locations around the world, including “in a church, in front of a wild Tasmanian ocean, behind a security guard, inside a huge glasshouse in Paris and in the dunes during a storm”.

During the Adelaide Festival, audiences can see Freeze! in the Grainger Studio in Hindley Street, the Adelaide Botanic Gardens and on Kangaroo Island. 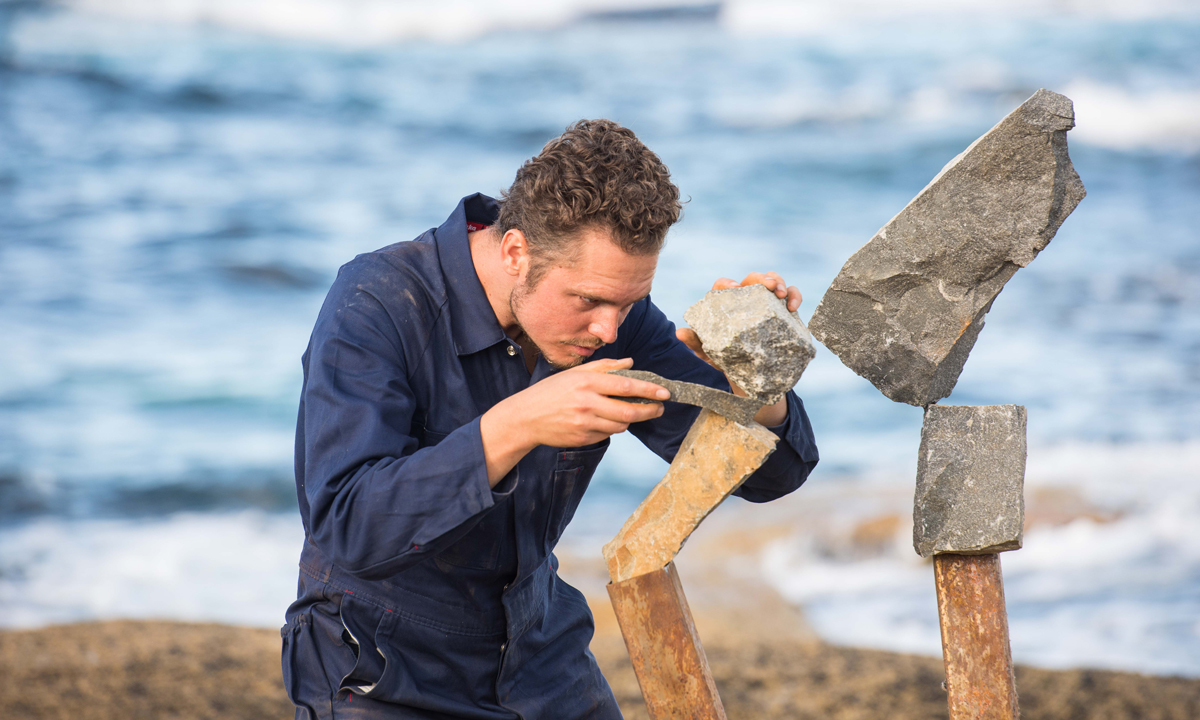 The performances are all improvised and because of the different locations and rocks, each one is unique. There’s no glue or other adhesive involved, just focus and what Steur describes as “finding balance between your own force of will, and that of the stone”.

He says the harder the rock, the better, as it reduces the risk of them crumbling under their own weight.

“For the rest, it’s the same as for anybody who picks up a rock: you like its shape or colour or both.”

The thing that makes Steur’s work so challenging – the fact that it is improvised and different every time – is what he believes also makes it so captivating for an audience.

“I cannot rehearse and produce the same work over and over again,” he says.

“I cannot just get in with my truck, build my set, perform, throw it back in, go to another venue and do the same thing. You have to invite life again and again, instead of showing a copy of a copy of a copy. This requires lots of guts.

“When you call yourself an artist, you need at least have guts and [by that] I mean be vulnerable.

“When I perform I am researching, improvising. I leave space for destruction, failure, life.

“It doesn’t mean all is random, I do always have a goal and in this performance it’s balancing rocks. To get there (or somewhere else), I use up all my concentration, without trying to have full control. If I succeed in this I get into a ‘flow’, and I think this is why the work can be captivating for spectators as well.”

So what does Steur think about while he’s making his sculptures?

“I am doing everything but thinking about myself at that point.”

For those looking for some respite from the festivals frenzy, Freeze! seems like the ideal tonic. And if you want to bring along your own rock, it may just end up in Steur’s sculpture.

Nick Steur will present Freeze! at the Grainger Studio on March 15 and 16, in the Adelaide Botanic Gardens on March 17 and 18 and on Kangaroo Island from March 20-22.