Created by Lebanese-British artist Tania El Khoury and being presented at the historic Queen’s Theatre during this year’s Adelaide Festival, the interactive sound installation draws on the practice of “domestic burials” which developed during the early stages of the revolt against the Assad regime because of the risk of holding public funerals for those involved in protests.

“It was just impossible to have the kind of memorial that we would understand would normally accompany someone’s death, so the practice evolved of families burying their dead in the back gardens of people’s homes or in nearby plots of land,” says Festival co-artistic-director Rachel Healy.

“It was a way of honouring that person and keeping them close to their family, but also keeping the living members of those families safe.” 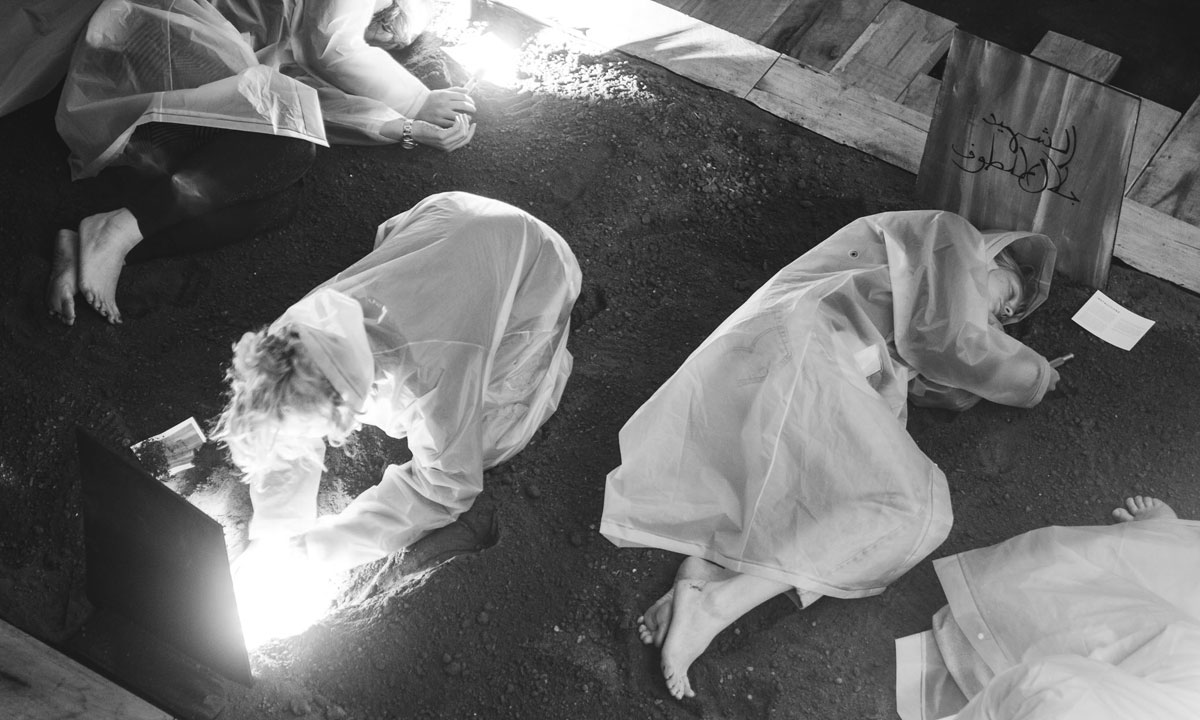 Gardens Speak participants dig in dirt to hear the stories of those killed in the Syrian conflict. Photo: Jessi Hunniford

In a booklet accompanying Gardens Speak, El Khoury says that shortly after the beginning of the Syrian uprising, she saw a photo of a mother burying her son in her garden.

The image haunted her.

“The scene conveyed for me the horrors and costs of the uprising, the transformation of domestic and safe spaces into morbid and mourning spaces, and the reality of the Syrian regime’s brutal crackdown on its mobilising population,” she writes.

In 2013, El Khoury’s researchers spoke to the family members and friends of some of the Syrian civilian activists killed and buried in private plots. The oral histories of 10 of those individuals are shared in her installation, which is experienced by just 10 audience members at a time.

“It requires full participation but through that you understand the experiences of what’s happened in a way that is quite different to sitting on your couch and watching Four Corners,” says Healy, who experienced Gardens Speak herself in an old theatre in Fribourg, Switzerland.

Audience members are each issued with a plastic raincoat and a card with a name in Arabic. They are then led into a darkened room, in the middle of which is a long rectangular garden bed with timber boards representing gravestones.

Each stone has a name, which matches one of those on the cards.

“When we heard music we were asked to lie down – so you were lying in the soil with your head near the gravestone,” Healy says.

“Then eventually you can hear words coming from the soil, and so you dig with your hands until you can put your ear to a spot where you can hear quite clearly.

“The oratory of each story comes through to you personally.”

Although based on information supplied by the dead person’s loved ones, the story is narrated in the first person. They talk of their early lives, their work, romantic and family relationships, and why they became involved in protests.

Healy heard the story of Mustafa Karmani, a young office worker and non-violent activist who once harboured dreams of becoming a writer or director. He was killed while attending a demonstration with his wife in 2012, and is buried in Aleppo.

“It’s like they are whispering to you about what happened to them – it’s extremely compelling,” Healy says of the experience.

“And in the end, obviously, it concludes with their death. They tell you how they died and the impact on their family.

“I found it extremely powerful and just incredibly human.”

At the end of the experience, participants are invited to write a letter in response and leave it in the soil. These are then taken to the family members of the people whose stories are shared.

Healy believes Gardens Speak can change the way people view and understand the conflict in Syria because it goes far beyond straightforward reportage to harness the power of personal stories. And despite the markedly different context in which those stories unfold, there are elements to which most people will be able to relate.

“I think that the nature of documentary and news reporting is that it talks in generalities; it talks about air strikes or the number of those murdered. And as soon as it’s personal – like the little child that we can all picture in the back of the ambulance too shocked to cry – suddenly it goes from general to specific.

“This is a series of stories that are absolutely about the personal … and it’s the personal story that brings it into the lived experience that we all share.

“I think that’s particularly important when those stories are in danger of seeming like they so far away from Australia and Australians’ experience.

“It’s those personal details and experiences that remind you that this is not so very far away, and the people are not so very different to us.”

Gardens Speak will be presented at the Queen’s Theatre in Playhouse Lane from March 4-19 during the Adelaide Festival. The experience lasts around 40 minutes.