This time last week, State Theatre Company SA was preparing for the sold-out opening night of its new play, Ripcord, on November 18.

State Opera SA had just presented its first show post-shutdown, Summer of the Seventeenth Doll, with two further performances scheduled for November 18 and 20 at Her Majesty’s Theatre.

The Adelaide Festival was about to launch its 2021 program on November 19, Feast Festival was in full swing, dozens of live music gigs were lined up for the coming week (including Music SA’s Parks and Rockreation in the Parklands), Australian Dance Theatre was about to premiere an immersive new work, and independent company Theatre Republic was rehearsing its highly anticipated new play The Bleeding True.

Then the Parafield COVID-19 cluster hit, and everything came to an abrupt halt.

“The suddenness of the outbreak last week really threw into sharp focus how changeable this situation still is,” says Jessica Alice, deputy chair of the Arts Industry Council of SA (AICSA) and director of Writers SA.

“We lost the momentum that we were opening up towards summer… there was that sense of optimism and hope and it really took the wind out of our sails.

“It’s good to know the outbreak wasn’t as bad as feared but it’s still a significant cluster so to know that those things can spiral out of control, even with the gathering restrictions, has a pretty massive impact on everyone.”

Alice says the latest pandemic scare came at a critical time for the South Australian arts sector, with shows and live events beginning to return, many organisations preparing to launch their 2021 programs, and the festival season on the horizon.

Although the hard lockdown was cut short, restrictions introduced at the start of last week remain in place ­– including the limit of one person per 4sqm for entertainment venues. However, arts organisations are hopeful these will be eased from December 1 (as indicated by Premier Steven Marshall today) so they can return to 50 per cent capacity and checkerboard seating in theatres.

Before the latest restrictions forced State Opera to take Summer of the Seventeenth Doll off stage, it had almost sold out the final two performances at Her Majesty’s Theatre.

State Theatre Company SA had already sold 4898 tickets for the season of Ripcord, a comedy by playwright David Lindsay-Abaire starring theatre legend Nancye Hayes; almost 3000 of those were for performances which had to be cancelled when the new restrictions were declared.

It announced today that it will resume public performances of Ripcord in the Dunstan Playhouse on December 1 and extend the season by around a week until December 13, with nine extra performances between December 6 and 13. (If a capacity limit of one person per 4sqm remained, it would be able to fit just 72 audience members in the theatre.)

State Theatre Company had to cancel five productions in 2020 as a result of COVID-19, with executive director Julian Hobba saying it finished the 2019-20 financial year with a deficit of $261,000, although its sold-out season of Gaslight in September did return a surplus.

But the impact of the ongoing uncertainty surrounding live performance is not only financial. Hobba told InDaily last week that it was also taking a heavy emotional toll on the artists.

“It may seem clichéd to describe this year as unprecedented, but it genuinely is,” he says.

“There has been nothing in the living memory of any Australian theatre artist to compare with this moment of incredible unpredictability.

“The culture of the theatre is to avoid cancelling performances except under the most unavoidable circumstances, and cancellations are actually very rare given all the variables in making a show. So to have to cancel so many performances in one year is shocking.

“It’s especially challenging, of course, for artists, both because of emotional commitment they make to their shows and performances, but also because of the casualisation of the artistic workforce.”

Hobba says COVID-19 hit at a time when the arts were already reeling from “enormous funding challenges”.

“To that extent, we hope this year will be a circuit breaker that allows us all to re-connect with the value of the arts in our communities and reimagine what a truly flourishing and cherished artistic sector looks like.”

One positive for the sector is that audiences are clearly hungry for the return of live entertainment.

Shows across South Australia have been selling out since the mid-year shutdown ended, from gigs such as Tandanya’s NAIDOC Week live music event Treaty, to plays like Gaslight and early-release shows for the 2021 Adelaide Cabaret Festival. 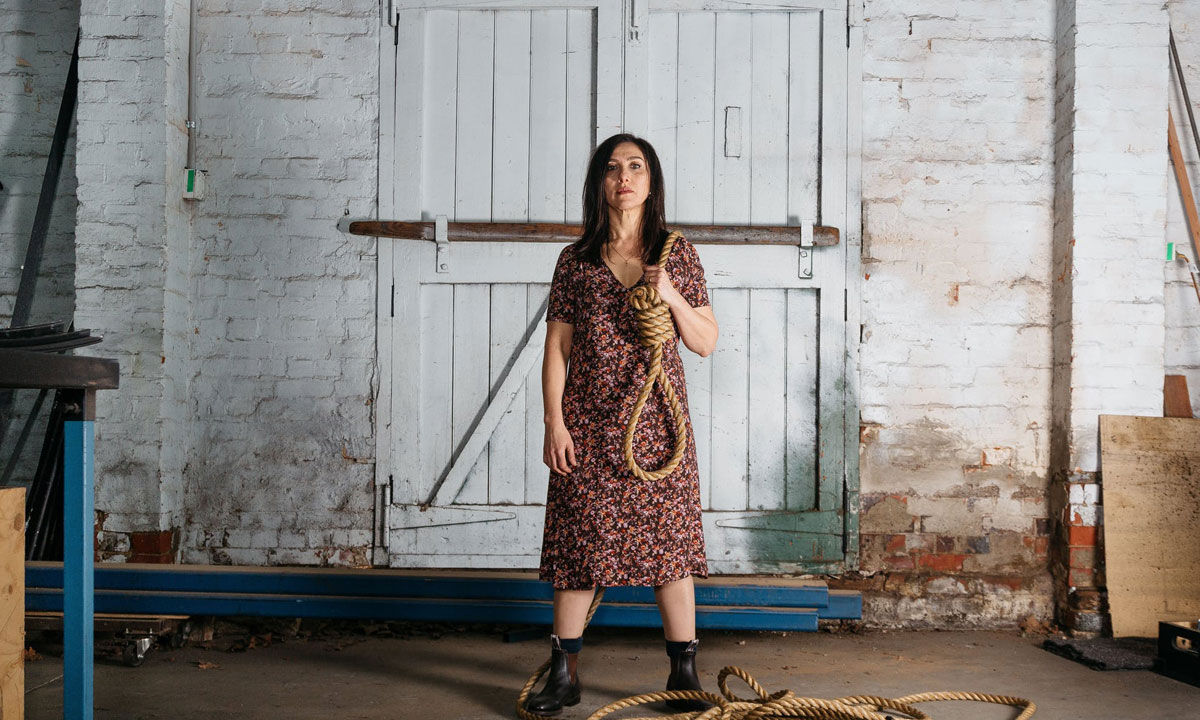 Elena Carapetis in The Bleeding Tree, which is currently in rehearsals.

Theatre Republic artistic director Corey McMahon says ticket sales for its December play, The Bleeding Tree, were tracking strongly until the lockdown was declared. They briefly stopped, but immediately started to pick up once the end to the lockdown was announced.

“It shows there’s incredible support out there for local theatre and Australian stories… we’re really heartened by that.”

Australian playwright Angus Cerini’s The Bleeding Tree, described as “a contemporary gothic tale of revenge”, had to be rescheduled from earlier this year because of COVID-19, with the ongoing uncertainty also forcing Theatre Republic to postpone its season of a new project about the threat of climate change.

The cast of The Bleeding Tree switched to virtual rehearsals using Zoom when the lockdown began, but are back to live rehearsals this week. McMahon is hopeful theatres will be back to 50 per cent capacity before performances begin on December 9.

Like Hobba, he says artists are struggling with the uncertainty caused by COVID-19.

“No one is designed to deal with this constant state of siege we’re under, and because the arts is such an unstable industry and work is hard to come by, it does play heavily on your mind.

“You’re constantly aware of how a lockdown and a raft of restrictions will affect your work as an artist and your ability to engage with audiences.”

Among the smaller theatre organisations affected by the latest pandemic outbreak are Bowden-based independent collective Rumpus, which had to cancel part of the season of How to Kill Your Hamster and is also working on new dates for its next play.

After sold-out early performances, Independent Theatre paused the season of its current play, Bent, but it announced yesterday that the season will resume at Goodwood Theatre from tomorrow with five extra performances. Bent is part of the program for Feast Festival, which has had a number of events postponed or cancelled, including this Sunday’s Picnic in the Park.

The live music scene has also been hit hard, with Music SA saying more than 120 gigs – including 20 in regional areas – were cancelled ahead of the planned six-day lockdown. Among them was the outdoor event Parks and Rockreation, which was to have taken place in the Parklands on Sunday.

“It’s been the most challenging year for our music industry and we will do everything we can to support our wonderful community through this,” Music SA general manager Kim Roberts said in a statement on Friday.

“We have support and resources available and once we can return to gigs safely, we will continue to promote the rebuilding of our live scene through GO LIVE,” she said.

Planning a festival or season when it’s unclear what travel restrictions and capacity limits will be in place in six months and beyond is tricky.

Having a COVID-19 outbreak hit right when you’re about to launch your program or season creates an even bigger headache – especially if it means you would have to put shows on sale with just 25 per cent (or less) venue capacity.

Adelaide Festival decided last week to postpone the launch of its 2021 program, which was originally scheduled for November 19. It was just the latest hurdle faced by organisers, with a number of changes to shows and venues having had to be made since a media briefing in late October.

WOMADelaide has also delayed its first line-up announcement for 2021, while the Adelaide Fringe plans to launch its program on December 18, with artists and venues adapting to meet COVID-19 restrictions.

The Adelaide Symphony Orchestra, which was forced to cancel most of its 2020 season, has pushed its 2021 season launch back to December 7 and will initially reveal details of concerts for only the first six months of the year.

The ASO has been eligible for JobKeeper support during the pandemic, which managing director Vincent Ciccarello acknowledges has put it in a more fortunate position than many in the arts sector. However, he says it hasn’t taken this for granted, with most of the organisation’s 100 full-time-equivalent staff (including musicians) taking a 20 per cent reduction in salary until the end of the year.

Although the ASO will post a surplus in 2020, Ciccarello says it is forecasting a $1 million deficit next year that will force it to eat into its reserves. This forecast is based on the expectation that venues will still be operating at half capacity, with the orchestra moving concerts to the Festival Theatre and doubling the number of performances so it can still meet audience demand.

“We’ve made a few decisions that really weigh up the pros and cons,” he says of the 2021 season.

“We’ve effectively shelved all our Showcase series concerts for 2021 because they would lose us hundreds of thousands of dollars over the year.”

After almost all its scheduled shows were cancelled or postponed this year, State Opera SA has so far announced just one production for 2021: Carousel: A Concert.

State Theatre Company SA will present a full season of eight main-stage plays next year, with Julian Hobba saying it has planned for reduced seating capacities, at 50 per cent, for the first half of 2021, and has “contingency scenarios if that should continue into the second half of the year”.

“The possibility of complete shutdowns at short notice is obviously going to be the most challenging thing for us to manage,” he says.

“That is why we are so grateful for our audience’s understanding and patience…  and why we would appeal to the whole community to continue to invest in live performance notwithstanding some of the uncertainty.

“Having people get behind local arts companies and invest through subscriptions and ticket purchases will be the best way to ensure we can all sustain ourselves through this period.”

Tarnanthi Art Fair to go ahead at Lot Fourteen

Jessica Alice says that although the events of the past week have been extremely disruptive, the arts sector generally was very supportive of the “decisive action” taken by the State Government.

She says the fact that it was able to get the outbreak under control quickly also created optimism and confidence for future planning.

AICSA, which represents more than 100 South Australian arts and cultural organisations and independent artists, plans to hold an event for members in January. Alice says one of the things it will look at is how artists can navigate the ongoing challenges faced, with the council also committed to working closely with the South Australian Government to make sure the sector is supported.

Arts SA distributed a total of $1.5 million in grants to support arts projects during the pandemic shutdown earlier this year, and in September Premier Steven Marshall announced a $10.2 million funding package “to create jobs and fast-track recovery in South Australia’s arts and culture sector”.