Filming the first three seasons of ABC-TV comedy Rosehaven, its creators and stars Celia Pacquola and Luke McGregor learned a lot about Tasmanian accommodation and what to pack for seven weeks of winter filming.

“In one town called Oatlands, 20 per cent of the accommodation is definitely haunted,” Pacquola says.

“Luke and I stayed in this place which was a colonial cottagey place that was lovely, but Luke made me swap rooms with him because his had a painting of a girl. He couldn’t sleep with it watching him.”

After two seasons, the star pair streamlined what they needed for their long, cold days of work on the show, which was nominated in 2018 for two AACTA (Australian Academy of Cinema and Television Arts) awards.

“The days are so long and cold, but each season we’re going in fitter and healthier to sustain energy levels,” Pacquola says.

“I hire a rowing machine for my hotel room, and I love my jigsaw puzzles. Luke has to have his video games. He’s got a bike, but I don’t know if he uses it much.”

Refining on and off-set needs isn’t the only thing that sees Pacquola, 35, at the top of her game. After 11 years on the stand-up comedy circuit, her versatility has been recognised with awards for acting and writing (an AACTA in 2016 for The Beautiful Lie, an AWGIE she shared with McGregor for Rosehaven) and sees her in constant demand.

This year the scene-stealing Offspring star, who’s not on Instagram and uses Twitter just to flag shows, will reprise her role as Nat in the ABC’s Utopia, and she’s also performing in a Sydney play. 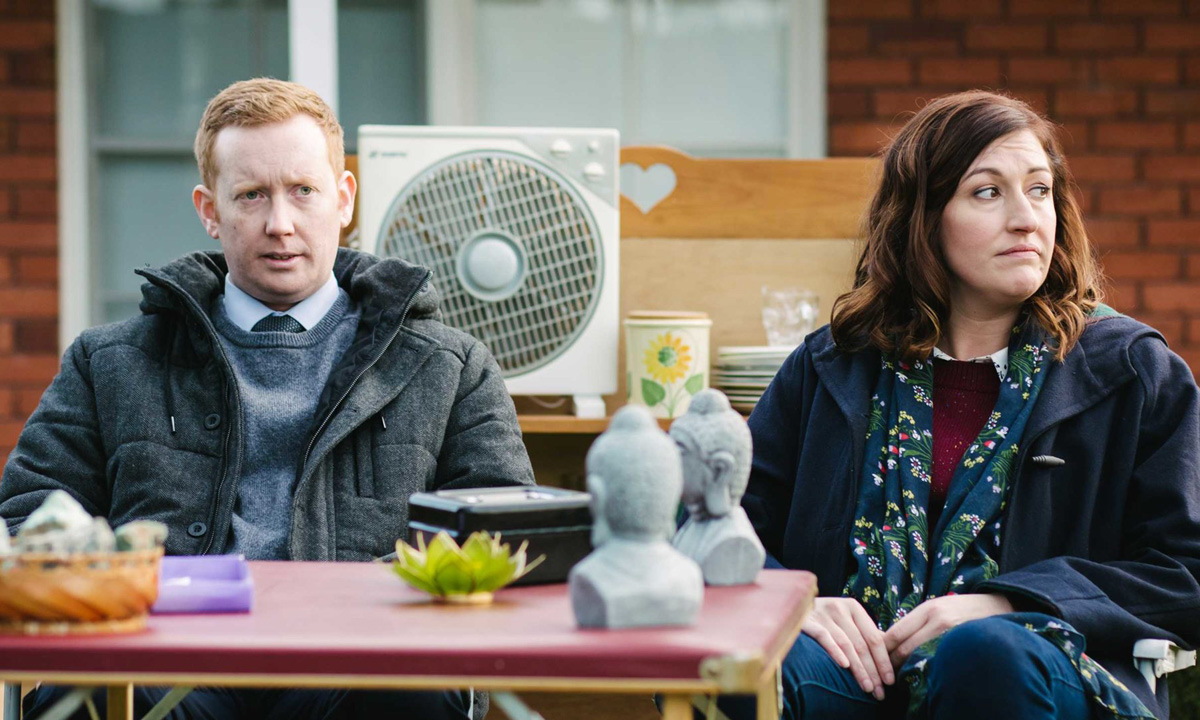 McGregor and Pacquola on the set of Rosehaven.

At the national broadcaster’s Melbourne studios in mid-December, a breezy Pacquola has been enjoying a brief break in her stonking workload.

“I’m really trying not to get into the fetishisation of busy. I’m like, ‘It’s actually fine to sit down for a minute’.”

She says trying to pack days with activities is a side effect of her profession.

“Doing showbizzy-type stuff, you never know when your next job is coming from, so downtime is filled with a tinge of fear. So much of it is out of your control.”

But with her comedy chops – Good News Week, Have You Been Paying Attention? and Spicks and Specks – Pacquola has a remedy for career anxiety.

“Comedy is so wonderful because I can make my own work. If I’m not getting acting, I can just go do stand-up, put on a new show.”

She also relies on “all the classics” to relax: “Wine and cheese. Spending time with family. Picking up heavy things to get fit. Reading.”

She devotes nights to finding out what new rescue terrier-cross Jimmy Chocolate Chip knows about the world.

“I just found out he can shake. Now I want to know if he can roll over. Maybe he can backflip.”

Growing up one of three girls on a small property in Victoria’s Yarra Valley “with a weird array of different animals”, Pacquola “was bored and had nothing to do”, so dived into being creative.

“I wrote a lot. My plan as a child was to be an actor and then a writer, just because I liked it. There were never any other jobs I wanted to do.”

At Deakin University, she studied drama and writing because “it was the only thing I could understand”, she says. “I didn’t know comedy was a job.”

Waitressing to make ends meet, Pacquola lacked confidence to be an actor until she met “a bunch of mates” and started a theatre company. A comedian she was dating signed her up for the Raw Comedy awards in 2006.

The national competition was won by Hannah Gadsby (Nanette) but Pacquola, who says “people falling over” makes her laugh, took out best first-time entrant.

“I started saying yes to everything, wrote articles and jokes and sketches, lived in the UK for four or five years, did radio. And here I am.”

She knew McGregor through stand-up but they weren’t friends until they hung out between takes on Utopia.

“Now I spend more time with him than anyone else in my life.”

The pair teamed up and pitched ideas to the ABC. Rosehaven, based around a real estate business in a fictional Tasmanian town, was their fifth “and probably last” crack at it.

Pacquola (who plays Emma) and McGregor (Daniel) don’t think about what the audience wants when they’re writing the show.

“We’re really happy they seem to like what we like, which is Luke and I mucking around. It’s just mates getting wrapped up in small things that on the world stage mean nothing.”

Rosehaven is “accidentally and weirdly family-friendly”, Pacquola says, “because we can’t swear on it. We’re allowed one s**t, which is very coveted.”

Rosehaven season three premieres on January 30 at 8.32pm on ABC-TV.