Get ready to do the timewarp again as Richard O’Brien’s rock ’n’ roll musical The Rocky Horror Show returns to Adelaide, with Craig McLachlan reprising his role as the outrageous fishnet-stocking-wearing Frank N Furter. While Cameron Daddo will play the narrator at most of the Adelaide performances, radio host Peter Goers will also step in as guest narrator at some of the shows, which promise plenty of colourful camp shenanigans and classic songs such as “Sweet Transvestite”, “Damn it Janet” and the “Time Warp”. Performances open at the Festival Theatre on December 28 and continue until January 13.

Promising “aerial artistry, thigh-slapping tunes and unbridled hilarity”, the colourful cabaret-acrobatic show Club Swizzle has returned to the Adelaide Festival Centre for a season of almost nightly shows that will continue through to New Year’s Eve. This year’s host is cabaret performer Reuben Kaye (winner of the best cabaret show award at the 2017 Adelaide Fringe), and you can read InDaily’s review here.

The Moonlight Cinema in Botanic Park will have an advance screening of new comedy Pitch Perfect 3 tonight (Friday), followed by the suitably festive flicks The Man Who Invented Christmas on Saturday night and Daddy’s Home 2 on Boxing Day. Other upcoming films include Murder on the Orient Express; Three Billboards Outside Ebbing, Missouri; The Mountain Between Us; Darkest Hour; Dirty Dancing and Swingin’ Safari . Gates open at 7pm and films begin at sundown. Moonlight Cinema runs until February 18; full program here.

After the cancellation of his planned shows earlier this year due to illness, James Reyne will play two All Crawl gigs at the Governor Hindmarsh tonight and Saturday night. And as the name suggests, he’ll be singing all Australian Crawl songs. On December 30, Lucky Seven will headline an all-ages Swing Ball showcasing the sounds of the 1940s and ’50s,  while New Year’s Eve at The Gov will be all about Latino grooves, with dancers, bands and DJs. 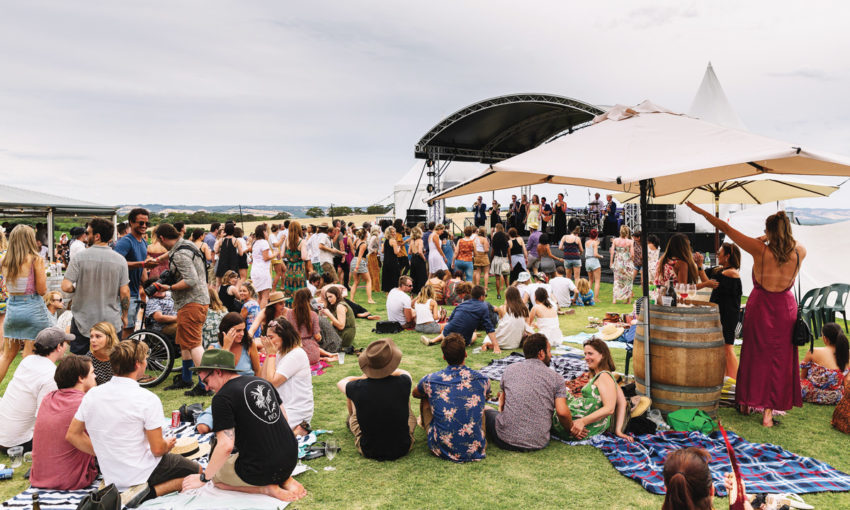 French electronic music star and multi-instrumentalist FKJ is headlining the Here’s To Now Festival at Coriole Winery on December 29, with other artists in the line-up including Hiatus Kaiyote frontwoman Nai Palm, The Shaolin Afronauts, Jordan Rakei,  Naomi Keyte, Abbey Howlett and Man Made Mountain. You can read more about the evolution of the festival and this year’s program in this CityMag article. The festival begins at 5pm.

This year’s official New Year’s Eve celebration in Elder Park will feature live performances by artists including Electric Fields, Wanderers, and Zkye & the GuyZ. There will also be a street theatre stage, children’s shows and roving performances, food stalls and bars, with fireworks displays at 9pm and midnight. See the Adelaide City Council website for the full schedule and transport information. There will also be official NYE celebrations and fireworks at Glenelg, with performers including Potbelleez.

New Sounds is the theme of the Art Gallery’s first First Fridays free after-hours event of the new year on January 5, with live performances by emerging singers Mi-Kaisha Masella and Kaiit. Tarnanthi artistic director Nici Cumpston will lead a “Curator’s Cut” tour of the exhibition of Aboriginal and Torres Strait Islander art, while artist Ricky Maynard will talk about his work in the show. The Tarnanthi exhibition continues until January 28 and features more than 40 new commissions. Throughout January, beginning on the 7th, the gallery will host a series of Tarnanthi Sunday Sessions featuring live music from 2-4pm. See the full First Fridays and Sunday Sessions programs here.