Set in 1927, the story centres on Monumental Pictures’ turbulent transition from the silent movie era to the introduction of sound in films.

Vaudeville veteran Lockwood and his leading lady Lina Lamont (Erica Heynatz) are billed as showbiz sweethearts. Fans clamour for news of their glamorous goings-on and scramble for a glimpse of their gorgeousness at premieres, unaware the romance is a sham.

They might be loved up on the screen but behind the scenes Lockwood can barely conceal the loathing he feels for his co-star. Lamont, however, is having none of it. She’s convinced the swoon-worthy Don is hers for eternity, and is determined to cling to him until he realises what he’s missing.

When the time comes to make the switch to the “talkies”, the façade begins to crumble. Lina’s vocals, far from dulcet, will need to be dubbed by newcomer Kathy. Despite the crew’s efforts, keeping this (and the blooming romance between Lockwood and his new crush) a secret from the leading lady and the audience proves impossible. Lina fights for her career but in the end she’s the squawking cause of her own undoing, and true love wins the day.

The film sits close to the top of most of the best-loved musicals lists, and was extremely well-received at the time of its initial release. It scored five wins and nine nominations across the US and UK, and O’Connor won a Golden Globe (Best Actor) for his performance as the original Cosmo Brown.

This latest stage production is also a favourite with critics and voting panels. It comes to Australia after four Olivier Award nominations and extended sell-out UK seasons in Chichester and London’s Palace Theatre. More recently, it picked up three nominations in Australia’s 2016 Helpmann Awards.

Adelaide’s season follows stints in Melbourne, Sydney and Brisbane, with the show set to open in Perth at the Crown Theatre on New Year’s Eve. 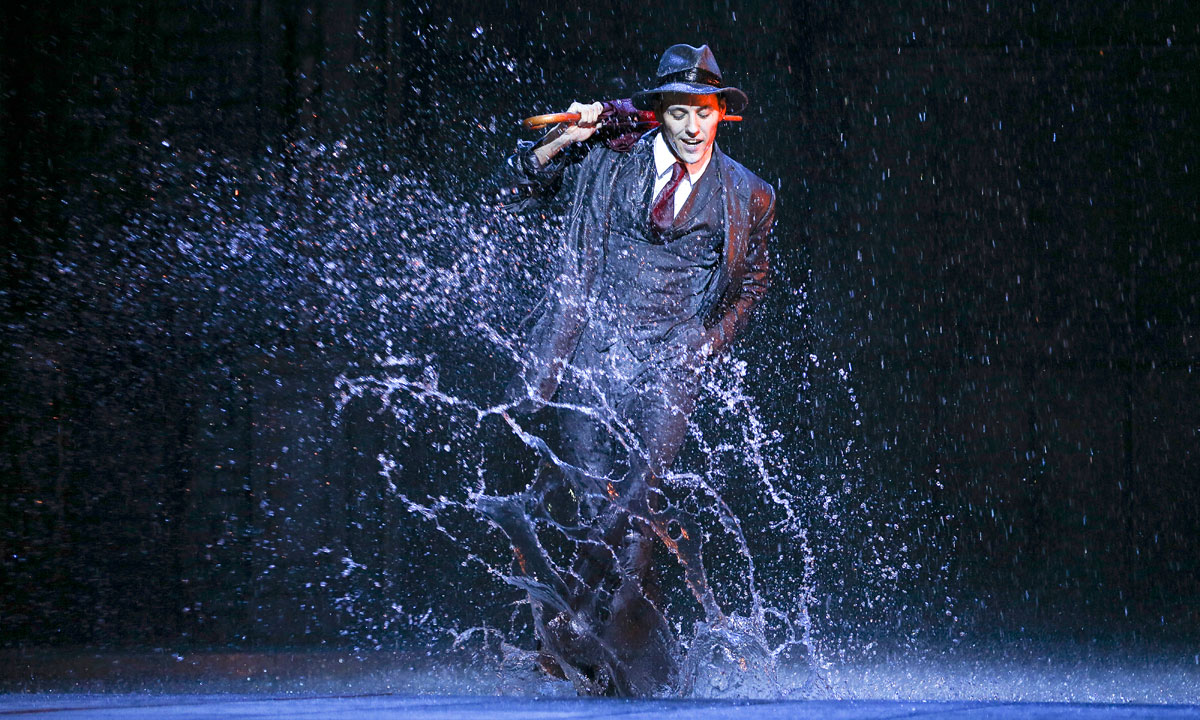 Much of the publicity focuses on the 6000 litres of heated water that drenches the performers each time it rains on stage. The hype is justified. There’s a lot of water –2000 litres from above and 4000 litres from below – in two thrilling scenes that see audience members in the “splash zone” scramble to don their complimentary plastic ponchos.

There’s pizzazz by the bucket-load, and the company members dazzle in vintage-inspired costumes rich in sequins, fringes and sharp ’20s tailoring. It’s a glorious rainbow of vibrant jewel tones and a treat for the eyes.

All the favourite songs are there, including “Fit as a Fiddle”, “Make ’em Laugh” and “Good Mornin’”, along with two renditions of “Singin’ in the Rain”. The singing and dancing is uniformly superb, but it’s in numbers like “You are My Lucky Star”, “Would You?” and “You Were Meant for Me” that this marvellous cast’s strong voices really shine.

Rohan Browne’s Lockwood is a dead ringer for Gene Kelly – a comparison that’s not essential but hard to avoid commenting on. He owns the stage with a confidence that fits the slick personality of his character, and complements the sweet sincerity and blossoming talent of Gretel Scarlett’s Selden. Jack Chambers, as Cosmo Brown, is a ball of comic energy and immensely likeable. The trio romp through the complex dance sequences with glee and finesse.

The star turn, however, is Erika Heynatz as clueless silent-movie siren Lina Lamont. She steals the show as the self-described “shimmering, glowing star in the cinema’s firmament” with a voice like fingernails being scraped down a blackboard. Her performance is hilarious, especially during the re-creations of black and white film scenes.

There really is nothing to fault. If you want to treat yourself to a joyful night out, don’t miss Singin’ in the Rain.

Singin’ in the Rain is playing the the Festival Theatre, Adelaide Festival Centre, until December 23.