The pair, whose crowdfunding campaign this week surpassed its $7000 target, are printing and distributing at least 1000 copies of a poster with the words “C’mon Aussie C’mon” in rainbow colours.

The poster was designed by Holmes, for whom the marriage equality issue has personal significance.

“And my uncle is gay, too, so the whole issue of marriage equality affects my family and affects me in turn, so I wanted to make something in response to this.”

Holmes, co-owner of Adelaide’s Tooth and Nail Gallery, says he was motivated to create the posters after America and other countries legalised same-sex marriage, while Australia was still debating the issue.

He used the words from the cricket chant “C’mon Aussie C’mon” because they are instantly recognisable to most Australians, but says the design seeks to subvert the nationalistic phrase and twist it into something else.

He initially printed just a few posters, which were displayed around Tooth and Nail gallery and elsewhere in Adelaide.

Then he was offered help by fellow Adelaide artist Peter Drew, who recently completed another project that saw him travel all over Australia pasting up posters with the words “Real Australians Say Welcome” in a show of support for asylum seekers.

The pair launched a Pozible campaign to print and distribute 1000 “C’mon Aussie C’mon” posters, plus T-shirts with the same wording.

“That’s not really the limit, either … we will do as many as it takes,” Drew says of the posters.

The posters are $2 each, and they will post them to any organisation, café, business or venue Australia-wide that offers to publicly display them. Drew says there has already been strong interest from SA and interstate, with the posters also used in marriage-equality rallies in Adelaide and Melbourne. 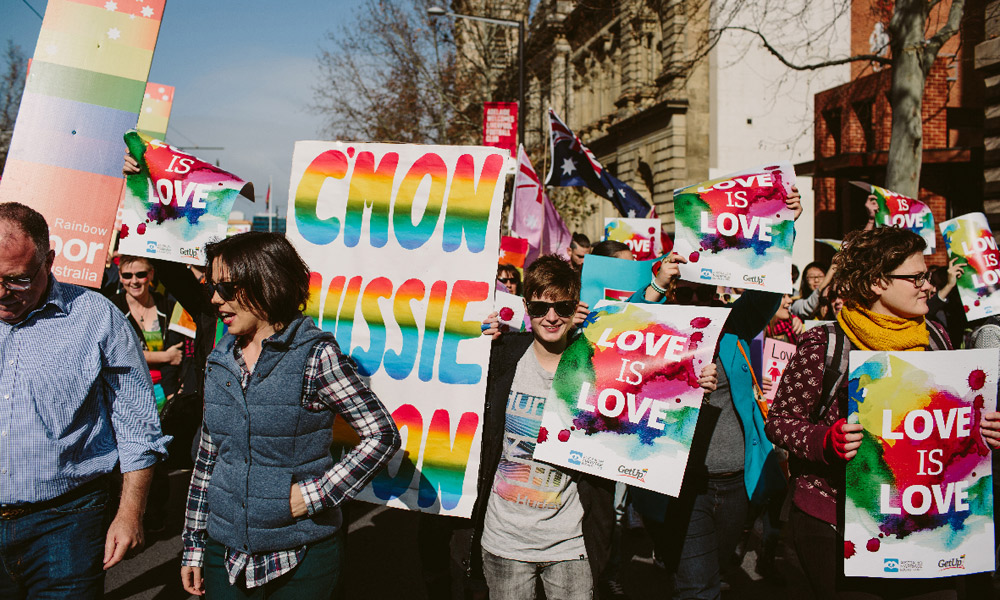 One of the posters in a marriage equality rally in Adelaide. Photo: Kate Pardey Photography

“We started off by targeting organisations that are specifically in support of marriage equality but we’ve had interest from everyone from politicians to corner stores to hairdressers,” Drew says.

“The more the merrier … we just want it to be visible. The idea is to demonstrate broad support, so we want to see ordinary Australians getting behind it and showing their support for marriage equality.”

Among those already displaying the posters are Holmes’ father and his partner, who own a café in Blackwood.

His mother and her partner also have one. He says although he is not sure they would get married if the law was changed in Australia, they should have the right to do so.

“I think art is an important way for people to make a connection to the issue,” he says.

“It’s about getting it in the public eye. Something like a poster is a good way of doing that.”