It also examines the physical and spiritual connections which bind humans to this planet and each other, and explores our seemingly limitless potential.

The story unfolds on a sloping stage in The Plateau. The front half is shaped like a turtle – a creature which, in various myths and cultures around the world, is said to represent the Earth. 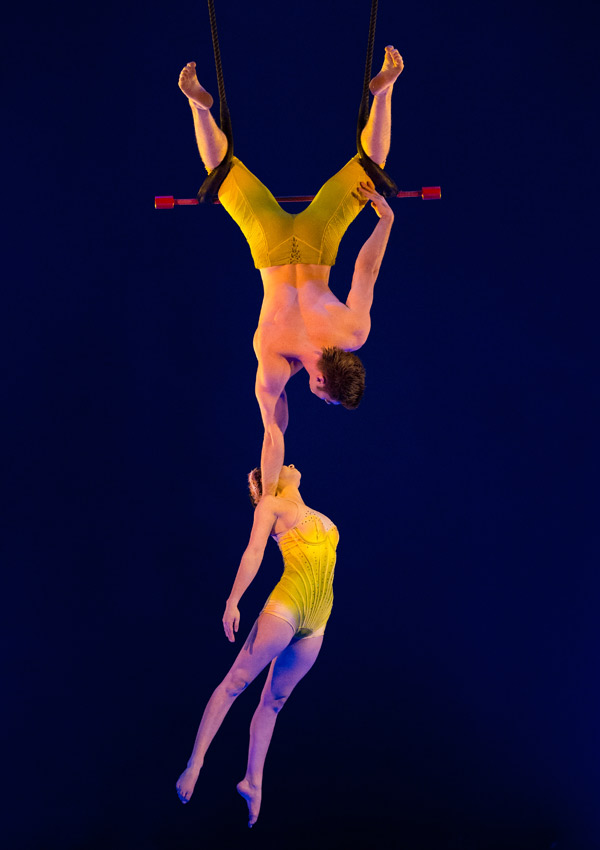 As the show begins, the turtle’s cloth-like shell is lifted away to reveal a menagerie of colourful “frogs” living within. A fast-paced parallel-bars routine ensues as the frogs fight for space on the frame, effortlessly ducking and weaving over and under each other – often with mere inches to spare.

Two hoop-dancing displays inspired by early Native American tribes reflect history, while a pair of alpha males wage war suspended from hoops above the stage, fighting to win the affection of a beautiful woman in a tribute to the age-old search for the perfect mate.

Misha the clown provides ample comedic moments, as does Valentino, a loud-mouthed lothario who travels between the scenes, causing chaos and making comical (and at times unwanted) advances towards a few unlucky women in the audience.

Each act is accompanied by a soundtrack of live music, with the deep tribal sounds and rhythmic chanting of the Native American characters particularly enjoyable.

Like all Cirque productions, Totem features an impressive array of stunning costumes; this time they are inspired by animals, the changing seasons and the colours of nature, as well as ancient civilisations such as the Mayans.  The frogs are vivid shades of red and green, which contrast beautifully against the darkened stage, while the “Crystal Man” – who represents life force – sparkles in his outfit made entirely of mirrors and crystals.

Images of tranquil ponds, angry seas and lush green foliage are projected onto the stage, creating a constantly changing environment with which the characters interact. The footage of lava spilling from fractured earth is breathtaking.

Throughout the opening-night performance, the cast wowed the Adelaide audience with impressive displays of physical strength and endurance. Their acrobatic feats, combined with a unique soundtrack, vibrant costumes and slick set, ensure Totem is a celebratory journey suitable for all ages.

Totem is being performed under The Plateau in the West Parklands until July 12.