Ray Lawler’s Summer of the Seventeenth Doll was first performed in Melbourne in 1955. It is an important play in Australian theatre history in its authentic portrayal of Australian characters and Australian life, complete with idiosyncratic dinkum Aussie expressions, attitudes and behaviours.

The storyline was quite controversial for its time in its depiction of a pair of cane cutters, Barney and Roo, who came down from Queensland to Melbourne every summer to share their holidays with barmaids Nancy and Olive. This particular summer, another barmaid who works with Olive, Pearl, has been asked to take the place of Nancy (who has decided to get married and settle down).

The relationship between the four is not like the free-love relationships of the ’60s but it is seen as an alternative to marriage, which they all see as the kiss of death to living. This seemingly idyllic relationship is not without its problems, especially as Roo is stony broke and no longer at the top of his game.

There is a great deal of depth and many layers in Summer of the Seventeenth Doll: it is essentially about masculinity and alpha males coming to terms with being replaced by younger, fitter, stronger men, but it is also about life choices and how to make the most of life. The summer party lifestyle that has been convenient and worked effectively for everyone for so many years is abruptly interrupted and none of the characters adapt or understand their predicament – they are in a childlike state of denial that they will ever age and have responsibilities. 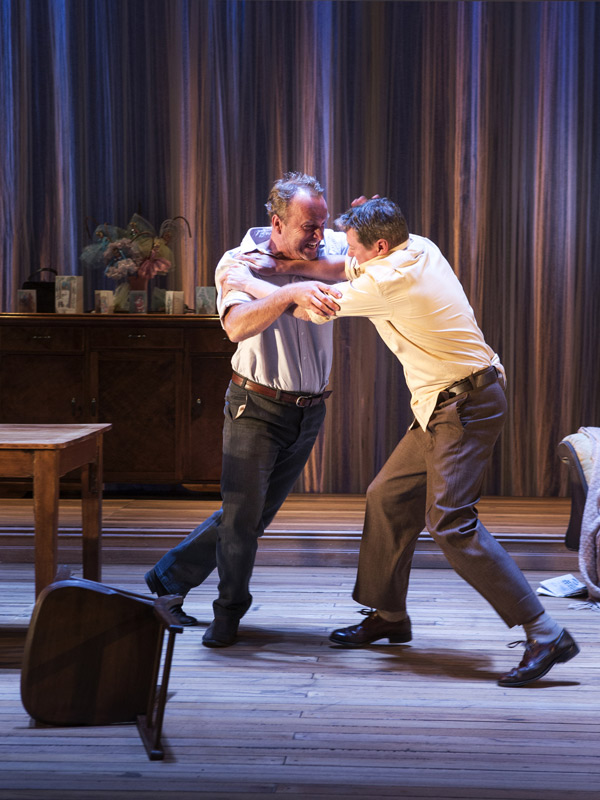 For this State Theatre Company production, set designer Pip Runciman has avoided using the obvious ’50s wallpaper and ducks on the wall: instead, the rooms are walled with gathered scrim that allows for outside scenes to be viewed upstage, and characters offstage to remain visible and present. This provides Nigel Levings with opportunities to create some very attractive lighting although, occasionally, the material is lit up like a temple and is just a little garish.

Lizzy Falkland does not put a foot wrong as Pearl, the new woman in the team: she presents herself a little haughtily initially and she delivers some terrific comic lines superbly. She makes the most of even a brief moment in a spotlight when she desperately attempts to down some beer straight from the bottle in an attempt to fit in.

Jacqy Philips revels in playing old, grumpy Emma Leech, the mother who lives with daughter Olive; she also has quality moments when she displays the wisdom accumulated with age and the knowledge that comes from observing the folly of others. Elena Carapetis is a convincing Olive, the barmaid who wants to be a party animal with no strings attached other than repeating the party for five months of every year, while Annabel Matheson is sweet as Bubba Ryan, the young woman next door who has observed the activities in the Leech household over the years and she is able to be a little feisty when treated as a child.

Ray Lawler’s Summer of the Seventeenth Doll is about men coping with their masculinity diminishing. After many years of feminism, equal opportunity and men being sensitive new-age guys, I wonder if it no longer comes naturally for modern men to be dinkum rough, tough Aussie blokes as Lawler described. Chris Pitman is built solidly and initially looks convincing as Roo, but he seems to be downcast and dejected throughout the play; we see rare glimpses of the man with animal magnetism whose visits so excited Olive.

Rory Walker is a talent and he gets loads of laughs with some very well-written lines (he would get more if he didn’t garble some of them). Tim Overton presents well as the young Johnny Dowd and convinces us that he could have taken down the older Roo.

After all these years, the play stands the test of time. There are jokes and lines that still take the audience by surprise, and the unique circumstances of the central characters create powerful theatre. Ray Lawler’s ending still packs a punch.

However, director Geordie Brookman’s capable cast and characters seem to be consumed by their miseries: their highs and excitement need to be more evident so that when everything unravels, their fall is greater.

State Theatre Company of South Australia is presenting Summer of the Seventeenth Doll at the Dunstan Playhouse until May 16.